After becoming the center of the New York Art Scene in the late 70s, the downtown neighborhood of SoHo is no longer the district of the city's art galleries which, in more recent years, have migrated toward Chelsea, the Lower East Side and Brooklyn. Yet, thanks to SoHo Art Network, visual arts in this neighborhood are still thriving / Leggi in italiano

In 1971, when Leo Castelli opened his gallery at 420 West Broadway, New York's downtown Soho neighborhood had yet to see its heyday. The move of the Leo Castelli Gallery signified an important shift in the New York art trade, and other galleries took note, moving toward the downtown area, specifically Soho. The Leo Castelli Gallery was the "it" gallery of its day, in terms of what it was showing (think Jasper Johns, Frank Stella, and Roy Lichtenstein) but also in the way it operated. Castelli was one of the first gallerists to put the artists he represented on his payroll, regardless of whether or not their works sold. For all intents and purposes, the galleries of Leo Castelli and Ileana Sonnabend (at one time Castelli’s wife, a gallerist, curator and businesswoman in her own right) transformed the neighborhood and made Soho the center of the art world in the United States.

In recent years, as the epicenter of New York’s gallery scene shifted to Chelsea, and the Lower East Side, and Brooklyn, it seemed that Soho had lost its artistic flare and importance in the New York Art scene. But there is in fact still a thriving arts community in the neighborhood. Formed in spring 2014 partially as a response to this misconception as well as an attempt to further the arts influence within the area, the Soho Arts Network is a collaboration of more than 15 non-profit arts organizations.

As the summer comes to an end, the Soho Arts Network is gearing up to introduce some exciting new shows and exhibitions that will be worth the trip downtown! I took the time during my time at the Center for Italian Modern Art to explore some of these arts spaces: 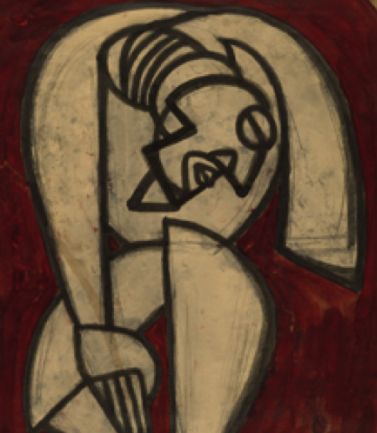 For their fall show, apexart will hold Life After Death and Elsewhere, a piece that collaborates with prisoners on Death Row in Nashville, Tennessee. Organized by Robin Paris and Tom Williams, both professors at the Watkins College of Art, Design & Film in Nashville, and open to the public from September 10 to October 24, the show will exhibit work from death row prisoners who are making their own creative memorial pieces. After a halt on executions for nearly six years, the state of Tennessee recently resumed ten scheduled executions. Addressing the life and challenges of incarceration, this piece attempts to bring real people and real emotions from behind bars into a creative space.

Throughout the month of August The Drawing Center hosted its Open Sessions 4. They are now be preparing for a three-day event, Drawing Sound Part II: String Noise, open from September 11 to September 13. The show centers around the junction of sound, drawing and performance art. I am particularly excited for their major fall exhibition, beginning in October, Richard Pousette-Dart: 1930s. Pousette-Dart (1916-1992) was one of the New York Abstract Expressionists. A candid display of Pousette-Dart's work in the 1930s, the show looks at ideas of abstraction, orientation and geometric forms and other influences on his work during this time. It will be interesting to see this in parallel to CIMA’s exhibition, also opening in October, which focuses on Giorgio Morandi’s work of the 1930s.

The Judd Foundation is coming up on the last days of its summer exhibition, Make art, not pipelines Get in on the Ground Floor: Dan Flavin, 2 Works, which closes on September 19. Curated by Flavin Judd, Co-President of the Judd Foundation, this show includes a variety of works by Dan Flavin, the American minimalist (Flavin Judd was named for the artist by his father, Donald Judd; they were good friends; there is also a Flavin work on the top floor, in what was Judd’s bedroom). As someone who lives and loves the minimalist lifestyle, I found this exhibition refreshingly simple.

Kept in their own space on the ground floor, the two major works Untitled (1969) and In memory of Sandy Calder (1977) illuminate the additional Judd sculptures around it. In collaboration with Judd’s original book collection and furniture pieces, this exhibition perpetuates a “less is more” vibe that allows these fabulous florescent works to dominate the space. This is the first time the Judd Foundation has created a temporary installation at 101 Spring Street, and it apparently is not going to be the last. I look forward to seeing what else they will present in their space! The exhibition is open free to the public on Fridays & Saturdays between 1-5:30pm. 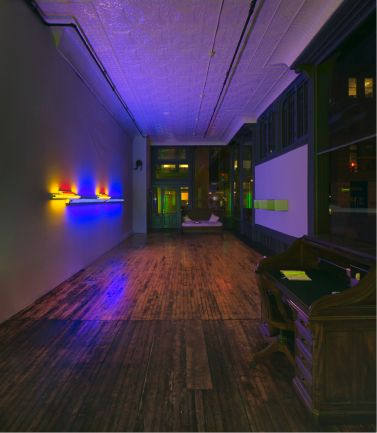 The summer exhibition for The Renee & Chaim Gross Foundation, The Word of Modern Art: Artists as Writers runs through the end of October. If you haven’t yet visited this amazing house museum/artist’s studio, get yourself over to LaGuardia Place! During the course of his long career, the sculptor Chaim Gross (1904-1991) collected a lot of works by his contemporaries. This exhibition showcases written and artistic works by more than 20 of Gross’s friends and colleagues, which are paired to create new ways of thinking about the mind of the artist. The atmosphere of the exhibition was something that was easily digested, yet thought-provoking. Unlike the methodically spaced, solitary displays we see in a traditional institutional art setting, this exhibition was without conventional rules of placement. The positioning of sculpture among groupings of both landscape and portrait works, all held in non-uniform framing made this exhibition’s composition similar to that of the Barnes Foundation. A charming, beautiful and provocative display, this is one you won’t want to miss.

The arts are alive and well in Manhattan's historic art neighborhood! The Soho Arts Network will have more exciting programs and events this coming fall and spring seasons, so be sure to keep an eye on their activities.