Pirandello 150 is a one-year long celebration that tributes Luigi Pirandello’s talent and literary production: Artistic Director John Martello tells us about the festival and about his aim to bring audiences to the Sicilian playwright’s work.

Pirandello 150 Festival salutes the year, 1867, in which one of the giants of modern literature came to the world — 150 years ago in Agrigento, formerly known as Girgenti. John Martello, Artistic Director of the initiative, cares however to underline that the purpose of the Festival is not simply to celebrate an anniversary, but “to bring new audiences to his work and to re-establish his place in dramatic production.”

2017’s city-wide celebration, Pirandello 150 will officially kick off on January 13 at Film Forum with Kaos and will run through Thursday, January 19 — the selection including Liolà, The Late Mathias Pascal (Il fu Mattia Pascal), You Laugh (Tu ridi) and The Nanny (La tata). Yet it is just a taste of what the celebrations will propose throughout the year: one-act plays, major theatrical productions, readings, panel discussions, podcasts, and academic seminars are in the agenda, to offer the audience a 360-degree view on the author’s work. Nobel laureate for literature Luigi Pirandello (1867-1936) is one of the seminal dramatists of the 20th century and his influence has been acknowledged by such masters as Sartre, Camus, Beckett, Ionesco, Edward Albee, Arthur Miller, and Thornton Wilder, along with the more contemporary playwrights inspired by those writers. Themes of illusion and identity, truth and mystification, are central to his production and have never stopped intriguing and challenging actors tackling his plays. In his works, Pirandello also evoked sights, sounds, smells, tastes and history of his native Sicily — land of contrasts, of sheer beauty and unspeakable pains.

“Our plan is to have at least one event of significance a mouth”, confirms Mr Martello, “in February we would like to feature a reading of the Mountain Giants (I giganti della montagna), Pirandello’s last unfinished play which is very rarely done in this country. As Executive Director of the Living Theater, I can say we have had a very successful reading of that work back in 1961. This year happens to be also the 70th anniversary of the Living Theatre — a good chance to connect the two events. For the spring, May-June, we are planning to have two major plays such as Tonight We Improvise (Stasera si recita a soggetto) and Each in Its Own Way (Ciascuno a suo modo) performed in rap at the Medicine Show Theater — Tonight We Improvise was actually a landmark production in 1975 at the Living Theater. What we also would like to do for this first half of the year, is the staging of a good portion of his one-act plays — Pirandello wrote forty one-acts — so the idea is to do 6-7 between now and the end of June, and other 6-7 in the fall. We are also working on different lectures and panel discussions whose organization we are finalizing these very days.” The Director then refers one of the grounding motivation behind the festival, which can count on the newly-established Helluva Theater Company in the team. “We wanted to celebrate Pirandello, but we also wanted to give actors the chance to do what they would not have the chance to do. Pirandello is not played in this country, and he still yet unknown. Even people in the theater can just mention Six Characters in Search of an Author (Sei personaggi in cerca d’autore), maybe The Man with the Flower in His Mouth (L’uomo dal fiore in bocca), Right You Are (If You Think So) (Cosi è (se vi pare)) or Henry IV (Enrico IV), and that’s it. They do not know about the one-acts, or the other texts, and there is so much there! We just did a reading last week on Cap and Bells (Il berretto a sonagli), and it went over very well: people could not simply believe how funny it was. The reason why, I think, Pirandello is not staged in America is to be found in translation,” goes on Mr Martello, “The British have their own translations, but the Americans have translations which do not work well on stage: they are very stiff, unactable. And this is what we are also doing. We are re-translating his work. For instance, I translated Così è (se vi pare), then we performed it — with a wonderful cast — and went very very well: people loved it! And hopefully we will do a production of that too.” 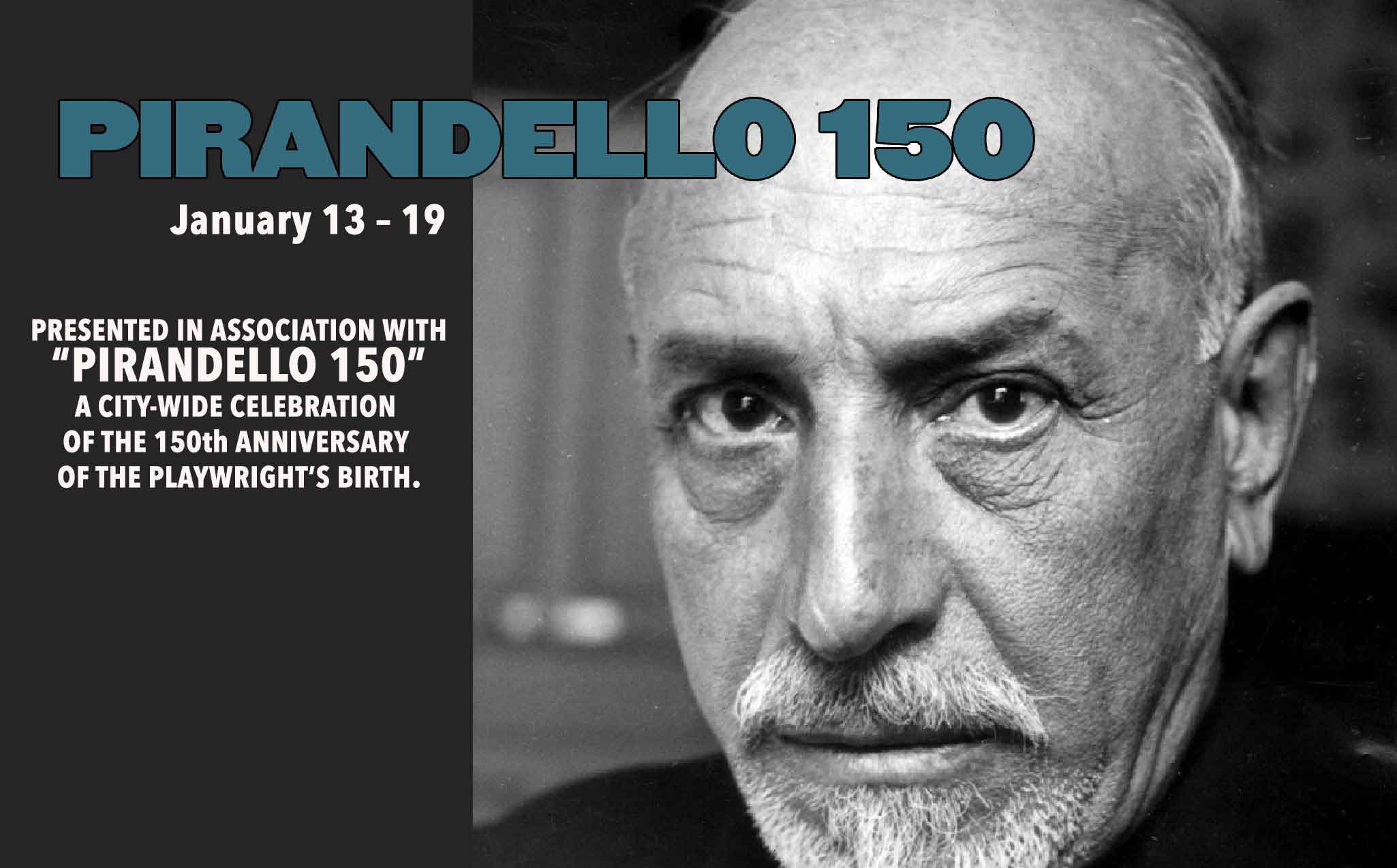 Regarding specifically Così è (se vi pare), Martello also noted that, should he be asked to pick just one play by the playwright and stage it in a theater packed with millennials, he would go for that very play, as it encapsulates Pirandello’s major topics — truth and its relativism, unknowability of reality, the human need for masks. And yet the play results to be compelling, totally entertaining.

“What I keep saying is that a translation”, adds the Director on this thorny issue, “has to be actable and compelling, as any good work of literature should, but a script in particular. Another thing that is always left out of Pirandello, is the humor. People are afraid of seeing Pirandello because they think it is going to be heavy, dry, honorous. But he is very entertaining! And this is clear for example in Kaos.”

Adapted loosely from four stories by Pirandello’s Short Stories for a Year (Novelle per un anno), Kaos is an hymn to Sicily and its Pirandellean characters, stupendously directed by Paolo and Vittorio Taviani in 1984. These fables, preceded by an initial sequence that holds them together, and followed by an epilogue about the author himself in conversation with his mother, are united by a shared imagery and the recurrence of certain characters. Kaos perfectly grasps the Sicilianness of Pirandello’s work and includes any aspect investigated by his literature — the horrific, the comic, the supernatural, the sad, the painful. “Even the most horrific parts of the movies are still entertaining”, comments the Director. “Sophocles, Shakespeare, Shaw and Pirandello are still done today: you can say anything about their works, but they were first and foremost entertainers. Otherwise people would not respond to them: they would have been forgotten. And Pirandello is exactly that: he is entertaining, exciting — he is fun! And hopefully the productions we do are fun too.”

Mr Martello credits Bruce Goldstein, Film Forum Director of Repertory Programming, for the selection of the movies included in the program screened at the Film Forum. “It is his business and he is wonderful at doing it. Of course he consulted with me, which I was happy to do, and came out with this series. The first thing we cared about was quality: they had to be very good movies. There were other movies we would have liked to add, but could not get — As you Desire Me (Come tu mi vuoi) with Greta Garbo, or Man, Beast and Virtue (L’uomo, la bestia e la virtù) by Steno featuring Orson Welles and Totò. But in the end we have been very happy with the choice, which also boasts Six Characters in Search of an Author. It is a TV production, starring Andy Griffith as lead actor. The day it will be screened — Sunday 15 at 1:20 pm — we are also going to have a live skype-call with California, with director Stacy Keach and 102-year-old producer Norman Loyd — a pillar who has worked basically with anyone among the big ones, from Chaplin to Hitchcock, to Jean Renoir. And the screening is free admission, so we hope to have a very good crowd.”

And we hope a very good crowd will attend the entire Festival too, as Pirandello is never known enough, and his “minor” works never staged enough — also in Italy…