Leggi in italiano
InScena! 2017 opens its program up to a change: May 10th and 12th, Rock Oedipus will be on stage. It's a show that balances theater and performing arts, by creating a meeting point between Aeschylus and Sophocles and the Doors, the Stooges and the Velved Underground.

After participating to the very first edition of InScena! in 2013, Manolo Muoio comes back to the Italian Theater Festival with his “Rock Oedipus;” a new genre that enters for the first time the scene of the InScena! Festival. “Rock Oedipus” is in fact different from all the other shows of this edition of the festival, in Muoio’s show the performance and music prevail on the acting. Experienced and talented actor and director, Muoio now tells us his personal Oedipus story through rock. His Oedipus is a front man who leaves in a warehouse of lost lyrics and memories, who fell in a psychedelic rock imaginary. And it’s in this scenario where theater and music are perfectly balanced that Aeschylus and Sophocles meet rock songs and rock bands like the Doors, the Stooges and the Velvet Underground. While waiting to see and experience Muoio’s journey accompanied by Luca Pietramala, let’s hear more from Manolo about his Oedipus.

There are some materials that smoldered underneath the ashes of the days, which are left as burning embers in the folds of the body and the mind. And they then flare up when the situation becomes suddenly auspicious. In 2000, I was part of a show in which I played Oedipus, with the same acting company that is producing this project, Teatro Rossosimona. Seven years later, I was Eteocles in an original reading of Aeschylus’s “Seven Against Thebes.” Of course, rock n’ roll was my personal Oedipus in a Freudian sense. The drifting that brought me to “kill the fathers” in a symbolic sense and to take flight towards mysterious and unknown worlds. Only when those two burning passions begun to short-circuit in the enclosure of my creative imagination, first the desire and then the project for this show were born.

The opportinuty that InScena! offers us is a unique one. For people like us, who are not backed by strong organizations and high budgets, it’s not easy to cross the Atlantic. To give the chance to small acting companies, or even to independent artists, to have an exceptional platform in five boroughs of NYC is certainly a more evident, additional value to this festival that is now at its fifth edition and keeps on offering a high-quality and rigorous program. The difficulty comes from the low or lack of support towards acting companies from the institutions that are supposed to promote the activities in Italy and abroad. I know very little about the American reality, but, from what I heard, New York is very different from the rest of the United States. I wouldn’t know how to extend the thought process to the rest of the USA. Moreover, the Italian theater – whatever this expression means today – suffers from a profound identity crisis that basically prevents it from being a dynamic and recognized reality on the international scene. We should start again from the basic sincerity of the artistic proposals and the effort to let people travel and spread the fruits of our work, bypassing any kind of obstacles. For instance, I translated some of the monologues of Rock Oedipus and, for the New York events, I will act in English. I think this is a way to meet the audience half way and create a direct connection. I hate reading the supertitles at the theater, they take the attention away from the real action.

It’s not my first time. In 2013, we were guests of the first edition of the InScena! festival, together with Ernesto Orrico, who, by chance, is going to take part in the festival as well with “La Mia Idea. Memoria di Joe Zangara.” If you were just once in NYC and you felt the intensity of that charming and seductive sensation of feeling home in every hidden corner of the city: the deep desire of repeating that experience becomes a sort of unexplainable spell. This time, the reason is made stronger by the fact that Rock Oediphus is a work that I created, put on stage and play in. What better bench mark than the audience of such a compelling and paradigmatic city? Moreover, InScena! NY is conceived for an audience formed mostly by people who are involved in the arts, in the showbiz and in the Italian culture in NYC, which is an additional incentive and opportunity to compare oneself with this lively and rooted community. This is an example of how to successfully project oneself towards the world – without forgetting one’s origins – practice new types of languages but with your feet deeply rooted in tradition. There is another very strong reason to bring our show to NYC, and it’s a very exciting experience: as I was saying at the beginning, the imagery through which Oedipus and his descendants’ tragic path is filtered and interpreted is deeply inspired by rock music. The Doors, Velvet Underground, Iggy Pop are our protected numbers and our contemporary oracles. I can’t wait to sing Lou Reed’s “Venus in Furs” in a theater in the Upper West Side or in Staten Island. 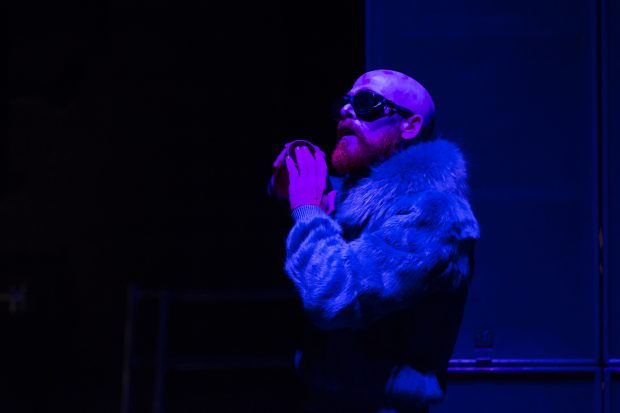 Travelling is always an opportunity to awaken the senses, mind and body. Suddenly plunging yourselves in a different context in which people speak another language, eat different food and have other habits is already an enriching experience that changes you, especially if you can look at it and live it from the right perspective, you are able to awaken in your eyes thousands of other eyes. Doing it while having the opportunity to bring along a piece of your own work and your Art – always and rigorously with the upper case “A” – is a privilege that we’ll try to fully enjoy and hope to make it profitable in the best way possible.

Rock Oedipus is for sure a show that the InScena! audience needs to see, first of all because, even according to the artistic directors, it represents an innovation in the traditional program of the festival. It’s the first time that the festival opens to a type of language like ours, that is balanced between theater, music and performing art.

I believe that New York’s public will appreciate it. People there will like it because, as I mentioned before, the matrix of our work is deeply rooted in rock imagery, the same rock that influenced and shaped this extraordinary city’s culture and life and also because our approach is extremely sincere. It’s a careful and prudent research that, in a direct way that points not so much to an intellectual comprehension of the work – of course there are different layers of reading according to one’s knowledge of the myth and other various textual references – but to the perception of the choreographies and music, through the flesh, nerves and heart of each single spectator.

Why your Oedipus is rock? What role does music have in your show?

Oedipus is the front-man. A lost deposit of texts, memories and fetish-objects lies here and that fell into a “small-private-perverse” rock imagery. Music is everything. It’s the way this character, rather the variety of characters in which the classic character disintegrated into, perceives reality and the surrounding world. Let’s not forget that Oedipus’s blindness, both real and metaphoric, towards his destiny and the characterizing events is foundational to the entire story.

Moreover, I am strongly convinced that the sound in theater always precedes and remains in a strong position of predominance in respect to the visual installments of the scene. And this is an absolute fact: you hear theater with your ears, even before contemplating it with your eyes. In the beginning was the Word, or, if you prefer, the sound. In the show, you say: “Nothing will be the same as before […] what looked like unimpeachable is destined to be shaken and put in danger.” What do you think you transmit to the public and what did you received in exchange during this oedipal journey you narrate so far?

That is an excerpt that refers to the destiny of the uprising movements that take place during the drama of the Story. The most tangible reference is the international situationist, the writings and the movie by Guy Debord, IN GIRUM IMUS NOCTE ET CONSUMIMUR IGNI. An old Latin palindrome that well describes our instable condition which is the creator of various transformations. With our modest work, we try to “shake” things up, while we walk the line on a rough and rugged terrain like a tightrope walker. One can either love or hate “Rock Oedipus.” Of course, anyone who has the chance to see the show is not going to forget it that easily.