Rosanna and Giovanna Caruso in Cellar

Tasting from Tanks at Caruso & Minini 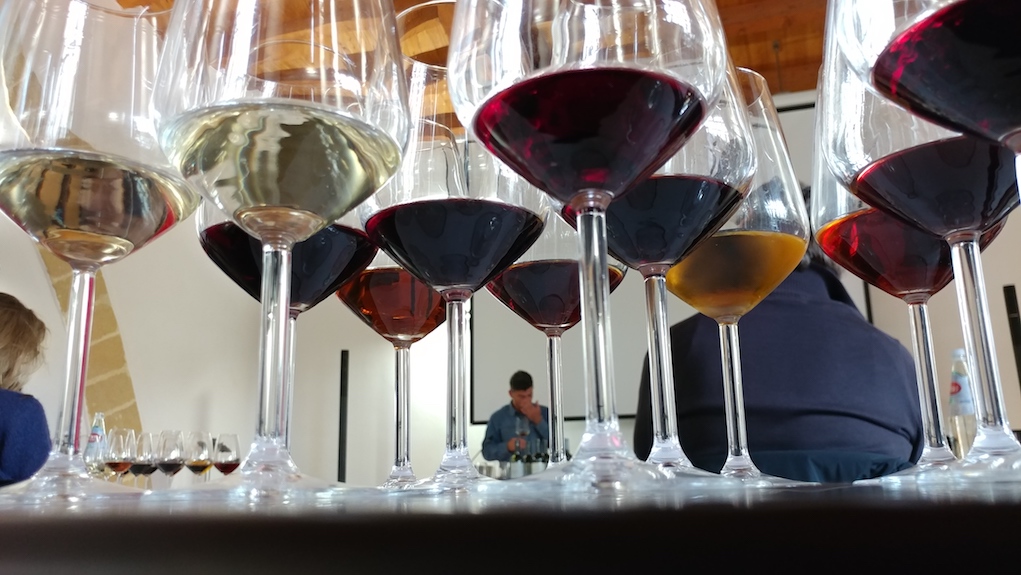 The only way that most wine regions can keep up with global competition is by focusing on progress - although I feel that sometimes, in the name of improving the past, wine producers can lose those precious treasures that are the heartbeat of that area; it is nice to see wineries in Marsala significantly improving on tradition while staying true to their area’s heart

I had the opportunity to attend Sicilia en Primeur 2018 located in Palermo, Sicily, this past May that included a side trip of my choosing from a selection of various parts of the island; as I looked at the list of options I knew right away that I would go to the Marsala area in North-West Sicily, which included a side trip to Pantelleria. It may seem odd to some Americans to pick Marsala as we typically associate Marsala with cooking wine – we have a beloved dish called Chicken Marsala served in Italian restaurants here in the US. But over the years, I have learned that Marsala and its surrounding areas hold a very special history with local Sicilian grape varieties and they have significantly improved their quality which makes them an exciting wine region that has been around for a long time.

Our first stop near the city of Marsala was Caruso & Minini with their family history dating back to the 1800s with Antonio Caruso growing grapes to sell to Marsala factories. The Caruso operation, selling grapes to factories, was successively passed down with the business, never significantly changing until the mid 1900s when Nino Caruso decided to start making and bottling his own wine; Nino son’s Stefano Caruso formed a partnership with Mario Minini to increase their capability to take their quality to the next level. Our visit was led by Stefano’s two daughters, Giovanna and Rosanna, who both work for the company. It was great to see so much youthful energy in Marsala with Giovanna and her younger sister Rosanna walking us around their ultra-modern facilities, hearing about Giovanna’s project that involved converting some of their vineyards to organic, and their playful ideas expressed vividly on their Naturalmente Bio organic wines.

It was thrilling to see a winery with a long family history surrender to the passion of such bright young women and give them the opportunity to make their own mark on the wine. Yet the tradition of the Caruso family legacy was rooted in their hearts with these young ladies talking about the last wine in our lineup, simply called “Nino”; the wine’s label was a drawing of their grandfather, drawn by their cousin. Giovanna said, “a piece of my heart is in this wine” as her voice started to crack and I could see both her and her sister’s eyes well up with tears… it was as if, for a moment, she wished he was there; truly one of the greatest tragedies in life is that those who helped shape us sometimes don’t get to see how we are trying to make them proud.

The next place we visited is one of the most celebrated fortified Marsala wine producers, established in 1833, where we tasted a 1939 Dolce Riserva from cask: Cantine Florio. As one can imagine, there is not a huge market for super-premium fortified Marsala wines and so it is fortunate that this historical place was bought by the high-end wine producer Duca di Salaparuta; at one time this fine wine producer was a state-run winery but in 2001 it was sold to Illva Saronno, famous for their Amaretto liqueurs, and this acquisition provided greater resources to escalate the quality quotient with Duca di Salaparuta, and most importantly, rescued an important relic of the past such as Florio from disappearing completely.

Felt with the Heart

I am a big advocate for progress in the wine world yet I sometimes stop to think, “What are we losing when we only have our eyes on the future and do not realize that we are losing precious treasures from the past?” Some special wines can only be truly appreciated by our hearts such as the Caruso sisters and their grandfather’s wine Nino… he was their world and they are not ready to say goodbye, so why should they.

2017 Corvo, Bianco, Terre Siciliane IGT, Hills of Central & Western Sicily, Italy ($11): A white wine that is a blend of Insolia and Grecanico. Corvo is the entry level wine from Duca di Salaparuta that helps them to reserve only the best for their top selection. A bright, zesty white with hints of citrus peel and juicy nectarine at an amazing price that makes it a must for casual drinking during the summer.

2017 Caruso & Minini, “Terre di Giumara”, Inzolia, Terre Siciliane IGT, Marsala, Sicily, Italy ($14): 100% Inzolia. For a few dollars more, one can get a better idea of the Inzolia grape with hints of almonds, dried thyme and lime blossom with a persistent, refreshing finish.

2014 Duca di Salaparuta, “Làvico”, Nerello Mascalese, Terre Siciliane IGT, North-East Sicily on the slopes of Mount Etna, Sicily, Italy ($26): 100% Nerello Mascalese that comes from the Etna area but since it does not qualify as an Etna DOC you don’t have to break the bank to try it. Duca di Salaparuta has had relationships with many grape growers around the whole of Sicily, and recently started purchasing land, and so they are able to offer wines from sought after areas at a reasonable price. This red wine had smoky minerality with wild brambly fruit and fine tannins that had a long expressive finish.

2017 Caruso & Minini, “Naturalmente Bio”, Catarratto, Sicilia DOC, Marsala, Sicily, Italy ($20): 100% organic Catarratto. As I mentioned above, this is part of Giovanna Caruso’s organic project “Naturalmente Bio” that focuses on the purest expression of classic Sicilian varieties. This white wine displays the Catarratto beautifully with pretty floral notes, pristine white peach and a saline minerality on the finish.  Fresh and clean, the wine is elegant, balanced, and fragrant. This vineyard is known for large stony rocks on top of its soil called “cuti”.

2008 Duca di Salaparuta, “Duca Enrico”, Nero d’Avola, Sicilia IGT, Central-South Sicily, Italy ($69): 100% Nero d’Avola. The “Duca Enrico” is an important wine – in 1984, it was the first mono-varietal Nero d’Avola; a wine that showed Sicily, and eventually the world, that this grape could make fine wine. The 2008 had layers of complexity with sweet tobacco, sautéed sage and truffles that had a regal shape with lots of verve and an extraordinarily long finish. We tasted a mini-vertical of 1997, 2008 and 2011 side by side. The 2011 had more restraint as I think it needed more cellar time yet I could get some fun graphite notes balanced by fleshy fruit. The 1997 had meaty notes that made me salivate, balanced by cinnamon stick and burnt sugar notes that had a mineral-driven finish with fine tannins.

2009 Caruso & Minini, “Nino”, Red Blend, Sicilia IGT, Marsala, Sicily, Italy (Price Unknown – Currently Not in the US Market): A blend of Sicily’s top red varieties from their best vineyards: Nero d’Avola, Frappato, Nerello Mascalese and Perricone. During the beginning of September, the first harvest is selected from the aforementioned grapes for drying in crates in the winery for 3 weeks where the grapes lose 40% of their water. Then in October, a second harvest happens of a strict selection in the vineyards of the best grapes that have been naturally dried by the Sicilian sun. Both are fermented together and aged in oak for at least 4 years. Flavors of dried currants, fresh leather and boysenberry preserves that slowly reveal scorched earth and wild rosemary. A big, bold, generous wine that embraces you and gives you everything. 15% abv alcohol with 10 g/l natural residual sugar. 2009 is the first vintage of this wine and only 5000 bottles were made.