Lineup of Ripasso and Amarone Bottles 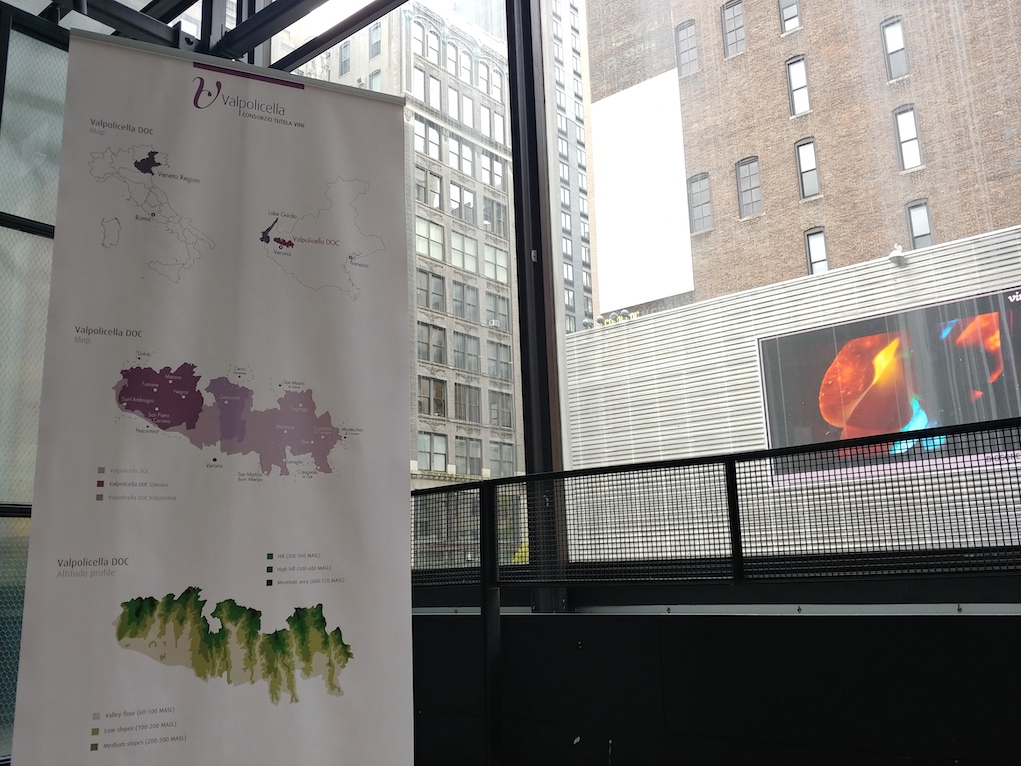 Map of Valpolicella at Ripasso Event in New York City “During a New York City wine seminar about the Ripasso wines of Valpolicella, I was reminded of my own journey through this past year of trying to stay true to my values and sense of character which are challenged every day. Ripasso wine producers have faced their own pressures to move towards various trends over many decades, and despite making a great improvement in quality, they know to stay steadfast to the soul of these wines”.

As we finish another year, I cannot help but think back to the people who have shaped my life for the better. It’s as if their kindness and ethics have infused me with a sense of purpose and determination to never stray from those qualities that I was most attracted to as a child. For some of us, those people may be family, friends, teachers, or perhaps a stranger who took the time to help us without expecting anything in return. As our lives take many twists and turns and we get pulled in so many directions (sometimes questioning our decisions and paths) we cannot help wondering in the quiet moments of examining the time that has past if we are where we ought to be.

The Valpolicella vineyards sit outside the charming city of Verona, in Italy, where the same grape varieties from the same designated area (there are subtle differences between the municipalities aka comunes) make four different wines. Those who have been drinking Italian wines for many decades may think of Valpolicella as simply quaffing light red wines since many of the wines we used to import to the US were mass-produced for quantity at low prices. But the wines have not only greatly improved over time, there can also be a significant disparity between producers as well as the Valpolicella level compared to its higher quality brethren, Valpolicella Superiore.

But what is interesting about Valpolicella, which is like a bright young child with its pristine fruit, is that it can be transformed into a more complex wine by going through a “Ripasso” process which translates into “passing twice”. The marc (solid remains of the grapes) from the regal Amarone wines of Valpolicella is used to transform Valpolicella Superiore into a more intricate wine by passing it through the Amarone skins.

As some of you might already know, Amarone grapes are not only the best of the vintage but they also go through a process of drying in lofts for around 100 days. Through time, this drying process has been refined to reflect less of a raisin-y quality and focus on retaining the remarkable bouquet that comes from the genetic alterations of Valpolicella local grape varieties – Corvina being the most important one. The drying process not only creates a more silky texture but it can bring out a multitude of fruits, flowers, herbs or pepper notes depending on the vineyard. The process of the finished wine passing through the Amarone skins is so crucial to the making of Ripasso that legally a wine producer can only make two bottles of Ripasso for every one bottle of Amarone.

The Mark of the Marc

During a recent wine seminar in New York City about Ripasso wine, I could not help but think that each Ripasso is given a mark by the Amarone skins that they pass through, just like many of us wear the marks of those who have most affected us in this world. It was interesting to observe young NYC sommeliers discover Ripasso, as well as Amarone, without the baggage that was passed on to my generation (these wines being an outdated raisin-y libation) – they were able to experience the grace of these wines. They would remark on the elegance, the complexity, mixture of savory notes with the pretty floral and fruit notes… in a way they knew more about what Ripasso and Amarone wines are in the here and now than those who used to drink them over 30 years ago, or even someone like myself who was mentored by many old school people in the wine trade who constantly think of it in an outdated way.

Valpolicella producers have made serious improvements with their Ripasso wines by making sure that they choose the Amarone skins (marc) that will best enhance the wines, as some may leave too much of a bitter note while others will bestow ethereal delights. We ourselves need to be mindful to not allow those bitter encounters in life to cover, or even warp, the grace that has been passed down to us from those special people who have showed us the way to a better inner life. We will be challenged, even at times doubting our own decisions, such as the debate many years ago of it making sense for the wine styles of Ripasso and Amarone to still exist as they temporarily fell out of favor; but luckily, the area knows that these practices are at the heart of their wines, it was just a matter of having modern science help wine producers to bring out the best in these wines as well as to never give up on the idea that the only way we move towards grace is to leave bitterness behind.

2015 Santi, “Solane”, Valpolicella Ripasso DOC Classico Superiore, Veneto, Italy ($13): 80% Corvina and 20% Rondinella. In some ways it is shocking that one can get a lovely Ripasso for this price but I guess that just benefits the buyer. A very pretty Ripasso with more of a lightness of being than the others I tasted, with fresh red berries and flowers dominating the nose and spice on the finish.

2015 Ilatium, “Campo dei Ciligei”, Valpolicella Ripasso DOC Superiore, Veneto, Italy ($21): Corvina and Corvinone make up 70% of blend with 20% of Rondinella and 10% of Croatina and other varieties; this just shows the fascinating blends of local varieties in the Valpolicella area. Ilatium is the neighbor of superstar producer Dal Forno who has received international acclaim for their big, bold wines. This 2015 Ilatium is a dark, brooding wine that is very sensuous on the body with a long and flavorful finish. 2015 was widely recognized as a better vintage than 2014 for more concentration.

2014 Domenico Fraccaroli, ‘Grotta del Ninfeo’, Valpolicella Ripasso DOC Superiore, Veneto, Italy ($22): Corvina and Corvinone make up 70% of blend with 20% of Rondinella and 10% of Molinara. I have recently just discovered this tiny producer and there is a real finesse to their wines. This was the wine that many of the young wine sommeliers were going crazy over because it is from a more difficult vintage where the best producers actually made extremely aromatic complex wines that were light and nimble on the palate. This is a great example of a 2014 that had enough fruit on the mid-palate yet expressed an intense minerality and wild flower note that was enchanting on the long expressive finish. Hard to find these wines but hoping some NYC restaurants will add them to their list.

2016 Vigneti di Ettore, Valpolicella Ripasso DOC Classico Superiore, Veneto, Italy ($30): 45% Corvina 30% Corvinone, 15% Rondinella and 10% Croatina. This is one of my favorite Valpolicella wine producers and they have a strong cult following, so if you see a bottle grab it. Ettore Righetti is the owner and manager of this small estate working it with his grandson Gabriele. The vitality and purity of expression is off the charts with this producer. That vibrant red fruit pops as one would expect with an Ettore wine but I found this 2016 even more complex than the 2015 I had earlier this year. The jury is still out on 2016 but some are saying it is even better than the 2015. A smoky minerality with hints of orange blossom and sweet raspberries made this wine extremely enticing with a fine texture that caressed the palate on the long, heady finish. 2009 Sartori di Verona ‘I Saltari’, Amarone della Valpolicella DOC*, Veneto, Italy ($55):  60% Corvina, 10% Corvinone, 20% Rondinella and 10% Croatina. The * indicates that this wine was only designated DOC as Amarone did not get its DOCG until 2010 but 2009 is considered a great Amarone vintage which was evident in this wine. The ripe black cherry fruit invites the taster into this multi-faceted wine with fresh sage, cocoa dust and exotic spice that made my mouth come alive with each sip. The outstanding texture was like ribbons of silk that have left their mark by leaving me with memories of their gentle beauty.