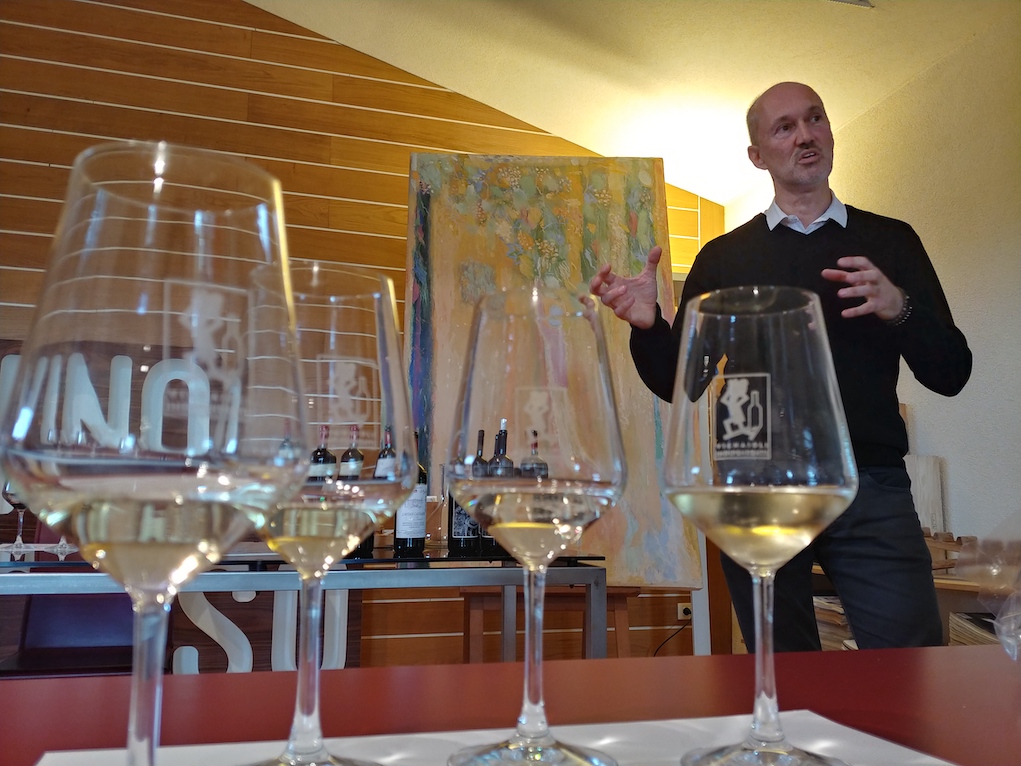 Lorenzo Palla Explaining the Differences Between the Prosecco Wines The unique history of Venice’s leadership has made it, for centuries, a hotbed for creativity, a sanctuary for refugees and allowed outlying vineyards to experiment to find various expressions of different terroirs. One winery was able to show that a well-known sparkling wine area was able to make a red Bordeaux blend to take the world by storm. As I walked through a stone entryway covered with vines, I was immediately struck by a drawing on the wall. A woman who embodied a goddess, yet still had some human aspects, hung on the wall welcoming my presence. She seemed to be looking directly at me, offering a wonderful bottle of wine. She was naked and unashamed in her natural state as she seemed comfortable in her own skin. I was intrigued by the electric energy of this piece despite it being a drawing tucked away in a cozy winery in the middle of the top red wine area in Prosecco.

‘Top red wine area in Prosecco’ may seem like an oxymoron to many who know the place for its delicious sparkling white wines. It is natural to assume that a wine producing territory should only focus on what makes it successful but the region of Veneto, where Prosecco lies and has Venice steering its historical influences, is not just any place and Prosecco is not just any wine region.

Prosecco can be divided into many classifications with regards to wine. Conegliano Valdobbiadene DOCG and Asolo DOCG top the quality classification pyramid with Prosecco sparkling wine. Many may be unaware of Asolo as a top Prosecco producing delineated area as it has been in the shadows of its more famous sibling. But what is even more striking is that Asolo has an eastern section that is referred to as Montello that has been making outstanding Bordeaux blends since the mid-1900s.

The winery with the goddess-like woman hanging on their wall is renowned in northeast Italy and has a cult following in New York City: Loredan Gasparini. Before the idea of ‘super tuscan’ became a global trend (Tuscan wines that had Bordeaux varieties in them) the much respected Treccani Encyclopaedia called Venegazzù (a zone that is a monopoly owned by the wine producer Loredan Gasparini) ‘a venerable red table wine produced in limited quantities’. And even more, extraordinary the top selection of their Venegazzù Bordeaux blend, called Capo di Stato, was included in the French publication entitled “100 vins de légende” as one of the top 100 wines in the world.

The Loredan Gasparini winery is currently run by the Palla family – Lorenzo Palla took over as winemaker for his father Giancarlo in 1998. The winery was founded in the 1950s by Count Piero Loredan, a direct descendant of one of the Doges of Venice. Who were the Doges of Venice? The Doges were the chief magistrates and leaders of the city of Venice from 726-1797 during the time of the Republic of Venice. The Doge’s power extended to those who lived outside the city and so Venice and its outlying areas were not under the command of the church that emanated from Rome but under the control of an aristocrat. Books, architecture, and art that were banned in the rest Italy were allowed in Venice during the time of the Doges as well as refugees fleeing religious persecution such as the Jews escaping the Inquisition in Spain.

The people who lived in and around Venice were open to the world much earlier than many other European regions. The founder of the Loredan Gasparini winery, Count Piero Loredan, studied in Bordeaux before purchasing the winery and vineyards. The Venegazzù zone of Montello was valued by Count Loredan for the high proportions of iron in the clay soil that retained higher acidity in Bordeaux red varieties, as well as the aspect of the place creating an overall finesse in the wines.

In 1973, Lorenzo Palla’s father bought the winery and vineyards from Count Loredan as he had no heir who wanted to take it over, and Lorenzo and his father Giancarlo still honor the foresight and talent of the previous owner.

A Label Representing an Evolved Society

Lorenzo talked about the interesting story behind the label of their legendary red wine, Capo di Stato, that included two drawings. A famous Italian artist, Tono Zancanaro, was commissioned by Count Loredan to create a piece inspired by the wine that would grace the bottle. Zancanaro came up with two sensual works that expressed a double soul, one male and one female, and so, Count Loredan, respecting the great artist’s creations, bottled half the bottles under one label and the other half under the other. Unfortunately, the female label was forbidden in other parts of Italy and so mainly the male version is used.

The drawing of the goddess-like woman who first greeted me as I entered Loredan Gasparini winery was the one who once adorned many of their Capo di Stato wines. Although the drawing can no longer be enjoyed by wine consumers, it still holds a prominent place within the winery as a reminder of the open-mindedness that led to such a winery existing and the importance of keeping true to that evolved viewpoint through the ups and downs of life. Loredan Gasparini, Asolo DOCG Superiore Prosecco, Dry, Veneto, Italy ($13.99): Majority of Glera from the 2017 vintage and 8g/l residual sugar. Their Glera grapes are planted on hilly areas with less fertile soil as Glera can be a vigorous variety that creates richer wines when the yields are restrained. I could write a whole article just on the Asolo Prosecco wines of Loredan Gasparini as they use a local yeast that is only known to exist in the Asolo area, as well as have a wide selection of vineyard specific Asolo wines that use different production methods. It is difficult to find his single vineyard Prosecco wines in the US but this Asolo DOCG gives a great impression of how his Prosecco is on another level. Intense juicy peach with a fierce backbone of minerality that had a beautiful citrus laced finish.

2017 Loredan Gasparini, Manzoni Bianco, Marca Trevigiana IGT, Veneto, Italy ($18.99): 100% Manzoni Bianco. Manzoni Bianco is a man-made crossing created by Professor Manzoni in the Prosecco area during the 1930s. Manzoni was a brilliant man who created many crossings but the Manzoni Bianco, a crossing between Pinot Bianco with Italian Riesling, is his most successful as it balances the body and fruit of Pinot Bianco with the sense of minerality and high acidity of Riesling. I was treated to a mini-vertical of this wine (2017, 2016, 2015) and it showed the various faces this grape can show in different vintages. 2017 was rich with pear sorbet fruit that was balanced by a zing of acidity and stoniness that carried across the mouthwatering finish.

2013 Capo di Stato, Montello Venegazzù DOC Superiore, Veneto, Italy ($49.00): a Field blend of Cabernet Sauvignon, Merlot, Cabernet Franc, and Malbec. This wine doesn’t quite make the over $50 price for this category, but it is a fantasy wine in every other respect. Layers of complex aromas of fresh leather, wild brambly fruit and a smoldering cigar note that made every sip addictive… the fine tannins had focused energy that gave a thrilling precision to the body. A wine that is riveting in its subtle, natural grace. I was also treated to a mini-vertical of this wine (2013, 2007, 1997) showing how the Capo di Stato only gets more elegant with age.