I felt melancholy being abroad over the Thanksgiving holiday, so we expats took matters into our own hands and invited our Italian friends for an improvised feast 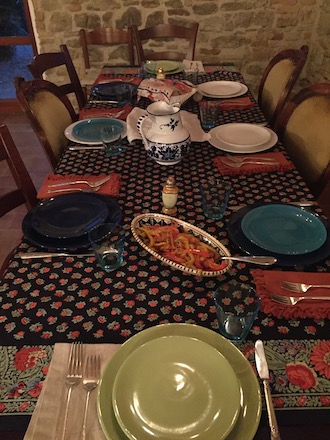 We are spending the entire fall here in Italy while our daughter does her semester abroad in Scotland. It’s been a great experience – cementing our friendships, meeting new people, becoming more a part of the community.  But I confess to having had a serious case of homesickness at Thanksgiving – missing my daughter, my family, my New York friends and missing being in a culture where Thanksgiving is a thing!  The antidote? We threw a belated Thanksgiving celebration for the entire Pascucci clan, (our neighbors from whom we bought our house) – Nonno (the grandfather), two sons, their wives and kids and a new great grandchild on the way.  It was wonderful to have this warm, friendly, appreciative crowd around our table.  It was their first Thanksgiving and since this holiday is all about food, it’s my favorite, if one can set aside the dark side– i.e. America’s persecution of and land grab from Native Americans.  I tried vainly to explain this in Italian – not sure I did a very good job.

Politics aside and back to food, there are certain Thanksgiving ingredients that are not available in Italy – the first being whole turkeys, which are available but they are enormous, tough and unchew-able, and covered with these nasty and dangerous looking spines.  However, there is sliced turkey breast, which is excellent.  The butchers here will slice it thin and pound the filets – they are tender and flavorful. Also unheard of in these parts are sweet potatoes, cranberries and pecans.  Below are my recipes with substitutions and keeping in mind the goal of representing all the colors of the harvest on the Thanksgiving table. All recipes will feed 12 people.

Check with your butcher to see if turkey breast is available.  Ask for some bones to make a broth.  I asked for turkey bones, but the butcher – a wonderful female butcher! – offered me instead some pork bones – the resulting broth was amazingly flavorful and I’ve used it in several different dishes.

First, make the broth, which can be done a day or two in advance.  Place the bones, quartered onion, tough leek tops and rosemary in a large soup pot.  Add water to cover the bones.  Bring to a boil.  Skim off the foam.  Let simmer for an hour or two until the broth tastes flavorful and not watery.  Add salt and pepper if you wish.  Broth can be keep refrigerated in jars for up to a week, or frozen for longer.  Skim the fat before using.

To bread the turkey filets, I use an Italian product called Fritto Misto, made by Le Farine Magiche.  It’s a mix of mostly Type 1 flour, plus a little semolina, rice flour and baking soda.  It is a miracle product and gives anything you’re frying a light golden coating.  You can also use regular flour with a half teaspoon of baking soda mixed in.  Lightly flour the turkey filets and saute in olive oil over medium high heat.  No need to cook them through– just a nice golden crunch to them, about 4 minutes per side.  Set the filets aside.

Using the same pan, add a bit more oil, the leeks and about a teaspoon of the remaining flour used to bread the filets. Stir until the mixture just begins to brown.  Stir in the lemon juice.  Add capers. Add a little white wine and about 1/2 c. of the broth and stir.  Allow the mixture to simmer, adding more broth until you have enough of this sauce to coat the turkey filets.  Season with salt, pepper, more lemon, or a bit of the caper brine, to taste.  If you’re serving right away, add the cooked filets to the pan and warm through.  If you’re serving later, place the filets in a roasting pan or an ovenproof baking dish, gently overlapping them.  Spoon the sauce over the filets and cover the pan with foil.  Warm for 5-10 minutes in the oven and serve.  No dry turkey!  No carcass to dispose of!  Just tender juicy turkey, as nature may have intended!

Nowadays, when I make a turkey in the U.S., I have it spatchcocked, or butterflied, which means there is no whole turkey to stuff.  It’s probably better for you not to stuff the turkey anyway, given fear of bacteria.  So just make stuffing as a side dish– everyone loves it.  This can be made a day in advance and warmed in the oven before serving.

About 1 c. of broth made above

In a large saute pan, cook the onion and sausage in the oil over medium high heat, breaking up sausage lumps, until both begin to brown slightly, about 6-7 minutes.  Add the thyme leaves, apple, chestnuts and bread, stirring to coat everything with the oil and sausage rendering.  Season with salt and pepper.  Add the wine, broth and stir until the stuffing starts to hold together.  Add more broth if needed.  Put the stuffing in an ovenproof baking dish and cover with foil.  Warm in the oven with other side dishes, or refrigerate overnight and warm for about 20 minutes before serving.

This was my first ever attempt at mashed potatoes.  I could not find a potato masher in Italy.  I had to use a spaghetti lifter that had a nice hole in the middle.  These came out really good.  What else can I say?

Bring a large pot of water to the boil.  Leaving skins on, scrub the potatoes, remove any “eyes” or bad spots, cut large potatoes in half or quarters.  Boil potatoes for about 15 minutes, or until fork tender.  While they’re cooking, melt the butter in a small pan and add the garlic.  Sweat the garlic on a low flame, just until it begins to turn golden.  Drain potatoes.  Return them to the pot, or place in a large, heavy bowl.  Mash the potatoes using whatever tool you have available.  Add the garlic butter, cream, truffle oil, parsley.  Season with salt and pepper.  Serve right away, or warm in the pot when ready to serve.

I would’ve used pecans in this dish, but could find none.  Instead, I bought almonds, which oddly enough, came from California, rather than southern Italy where they grow abundantly.  Our fruit guy said they were cheaper coming from California – such are the imponderables of our global economy… By the way, a butternut squash in Italian is a violina – how lovely is that? Sage in Italy is not available in the markets – everyone either has a big plant in their garden, or a large potted sage on their windowsill.  But fresh sage is available in most grocery stores in the U.S.

Preheat the oven to 375 F.  Toast the nuts in a small frying pan or toaster oven until fragrant and just beginning to brown.  Set aside.  On a rimmed baking sheet or roasting pan, toss the squash chunks with olive oil, sage, salt and pepper to taste.  Roast for about 20 minutes, or until fork tender.  Remove from oven and stir in the toasted nuts. 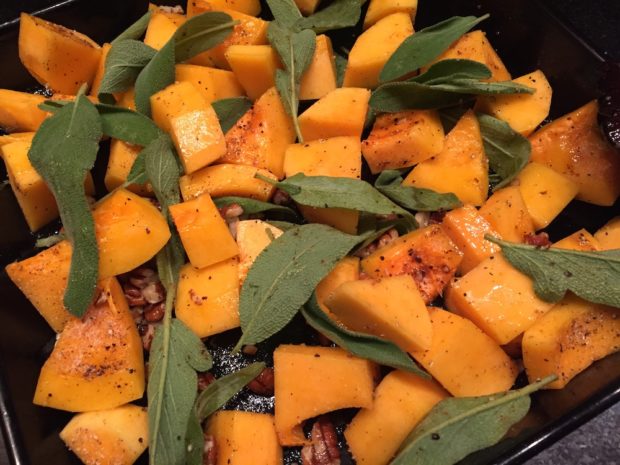 We tried valiantly to have a small late summer orto, or vegetable garden in our yard this year. The arugula, cabbage and broccoli were doing well until the cinghiale (or wild boar) dug up most of them. I shoved the cabbage and broccoli back in the ground, but then some pale green worms began eating the cabbage leaves – I guess that’s how they turned green.  But the critters left alone my fennel and I proudly harvested it for our Thanksgiving meal.

salt and pepper to taste

Preheat oven to 375F. Clean and core the fennel, remove the green stalks saving the fronds, then chop the white parts roughly to half-inch dice. Dice onions. Heat a large frying pan over medium high heat, add olive oil and then add onions and fennel. Cook until just tender, about 7-8 minutes. Chop the reserved fennel fronds. Remove pan from heat and stir in breadcrumbs, parmesan, chopped fennel fronds and salt and pepper.  Place mixture in a lightly oiled ovenproof baking dish or roasting pan. Cook for about 20 minutes and serve. If not ready to serve, delay the last step.

** A note about fresh bread crumbs. We eat way more bread here in Italy than in the U.S.  The bread is so good, cheap and it’s such a part of life.  Consequently I always have leftover bread after a few days. When I have time, I let it get hard, or lightly toast it in the oven, and then put it in the food processor. I process until it’s still rather lumpy and store it in an airtight container in the fridge. When the lumpy breadcrumbs cook into a dish, they add texture and crunch.  It’s worth the effort.

1 pint grape tomatoes, or whatever is most flavorful in season

Wash beans and pinch off the stem ends that connect to the vine. Allow to dry in a colander. Heat a large skillet to high heat.  Add oil, beans, pepper flakes, oregano and then garlic. Stir occasionally, allowing beans to brown partially. Cook for about 7 minutes. While the beans are cooking, cut the tomatoes into quarters or small pieces.  Add tomatoes to the pan, keeping heat high. When tomatoes start to make a sauce, lower the heat and continue to cook until the beans are tender. Remove from heat. The beans can sit in their pan all day and warm up just before serving. 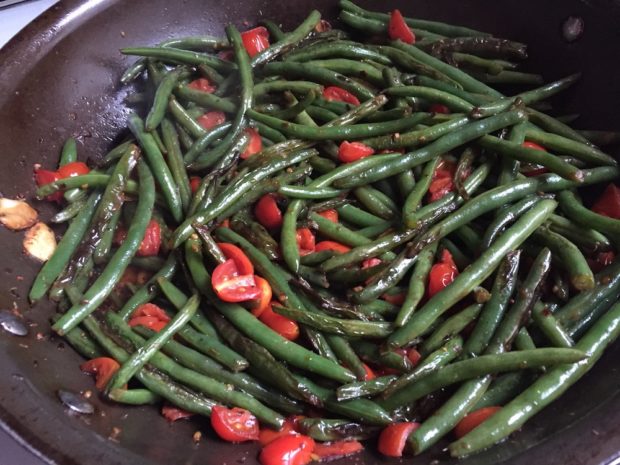 I was so sad to have no cranberries – really wanted to introduce the Italians to this treat that I love to make and eat. Instead, I made a sauce of some quinces that my friend Saranella gave me from her trees. One of my Italian guests kept spooning it onto his plate, so it must’ve been a hit. I’m not actually sure where to get quinces– they are not particularly popular in the U.S.  But it might be possible to find some at a farmers’ market. This is simple to make and you could possibly substitute very tart apples.

Wash, peel, and core the quinces, and cut into chunks. Add to a large pot with sugar and cinnamon. Bring to a boil. Reduce to a simmer and allow to cook for 3-4 hours.  Add a bit of water or sweet wine if it looks too dry. Like jam, this can be kept in sterilized jars, or in the fridge. It’s a sweet/tart condiment, and can be used similarly to cranberry sauce.

I haven’t posted any dessert recipes here since most of the desserts I make are from published recipes. I really wanted to make a traditional apple pie for this meal, but honestly, of all the fruit and vegetables that are far superior in Italy, apples are kind of sub-standard.  We do them much better in the U.S.  So I decided on a pear tart using this recipe from Food and Wine Magazine, substituting walnuts for pecans.  Easy to make and delicious.  Buon appetito, tutti!