The exhibition Italian Futurism, 1909–1944: Reconstructing the Universe, traces the history of one of the most controversial avant-garde movements of Italian art. Our interview with the curator, Vivien Greene. (Leggi in italiano)

At the start of the Twentieth Century, Italy was shaken by a great social and cultural ferment. Artists were championing modernity and insurgency, speed and youthful braveness. They called themselves futurists. The history of their art movement run parallel to the rise of fascism but there was much more beyond that relationship.

From February 21 through September 1, the Solomon R. Guggenheim Museum presents Italian Futurism, 1909–1944: Reconstructing the Universe, the first comprehensive overview in the United States of one of Europe’s most important 20th century avant-garde movements. Featuring over 360 works by more than 80 Italian artists, architects, designers, photographers, and writers, this multidisciplinary exhibition examines the full historical breadth of Futurism, from its 1909 inception with the publication of the first Futurist manifesto by Filippo Tommaso Marinetti through its demise at the end of World War II.

The exhibition, is organized by Vivien Greene, Senior Curator for the 19th and Early 20th Century Art at the Solomon R. Guggenheim Museum. On the occasion of the press preview on thursday, Greene spent a few minutes talking with La VOCE.

“We wanted to do this show because there's never been a large scale exhibition on Italian Futurism in the United States – Greene said – and we felt that it was time to present this great avant-garde to a greater public”.

I think in Italy we tend to think that Futurism, given that is so much related to a specific historic moment, didn't really cross borders. Indeed it seems that it did…

Italian Futurism actually did cross borders. During its life time, Futurism had spread everywhere –in London, in Poland, in South and Central America, even in New York. The Futurist Manifest was already translated in 1909 into Japanese. It's a movement that has a lot of translation capability and many of the futurism ideals, such as the embrace of technology and speed, were very contemporary and permeated the cultural practice. 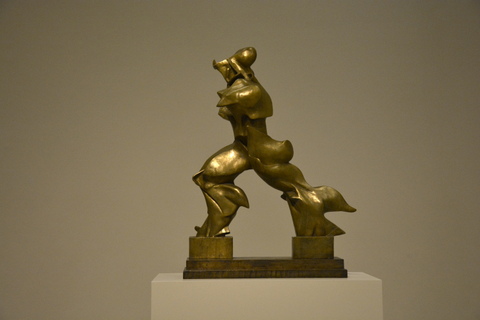 They don't and that's why we are doing this exhibition –to broaden the american view of Italian culture. I think Italy is best know for ancient art, roman art – we know the colosseum, we know the Sistine Chapel in the United States. So to broaden that view and introduce a great avant-garde that was very significant for the development of modernism if part of our goal here.

And I don't think Futurism was well know in the US even when it was happening. It was better known elsewhere. Part of the problem is that in America in the pre War World Second time period people looked more to France and to Paris and that is something that our history in general has to struggle with –this franco-centric narrative of what happened in the world with arts– and look beyond Paris, because there was certainly a great more to see than just that.

It has been often said that the Guggenheim is a challenging space. How did it work with this exhibition?

Well, I worked here for 20 years so I am very familiar with the space. I think I have learned to let Frank Lloyd Wright talk to me when I install exhibitions or even when I work with architects to design the exhibition. In this case the space really lent itself to Futurism – the idea of simultaneity of speed and dynamism, with the rotunda and the ramps, the spectator at the center of the composition, our whole museum in a sense is a futurist total work of art. The walls are very much in tune with both the curves and forms of the futurist painting or architectural work and our own building. We didn't have to fight the building, we went with the building. 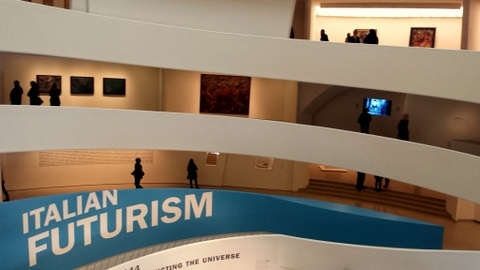 Do you think the experience of visiting this exhibition will be somehow influenced by the social and political message behind this art?

I think visitors will learn. And it's really interesting to learn about an avant-garde that in its early days started off being very revolutionary and of the left and watch their transformation to the right. And for those who know Futurism, there is this stereotype that futurists and fascists were allies when in fact that wasn't an easy relationship, so it's interesting to see how in a sense they were parallel experiences. Fascism is many things, there were many fascisms. And I think fascism took more from futurism than futurism took from fascism. There was a lot of co-option in early days on Mussolini's part.

Being a woman, how do you feel about the way futurists saw women?

There are a lot of contradictions that underscore the Italian Futurism movement and that's certainly one of them. Scorn for woman and yet the call for universal suffrage… it's a little bit confusing. But in the end Futurism had a lot of women practitioners, even early on. Marinetti's maids, the Angelini sisters, run his publishing business. You know, what you preach sometimes and what is actually happening are not completely in sync.

What is your relationship with Italy?

I am half Italian and half American and I grew up part in Italy, in Palermo, and studied in Rome. Also, my area of expertise is Italian modernism.

What is your favorite piece in the show?