For the first time in the States, a large exhibition tells the whole historical course of a movement that has suffered its relationship with Italian fascism, while playing a crucial role in the development of international modern art. At the Guggenheim Museum the works of 80 artists, including painting, theater, poetry, design and advertising (leggi in italiano)

Italian Futurism, 1909-1944: Reconstructing the Universe is the most comprehensive exhibition on Futurism ever organized in the United States. It features over 380 pieces, by more than 80 artists, designers, photographers, sculptors, painters, musicians, poets and writers. "It’s a very pretentious exhibit," admitted Vivien Greene, Senior Curator for the 19th and Early 20th Century Art at the Solomon R. Guggenheim Museum, specialized in Italian Modernism. On display, all the best known futurist artists: Marinetti, Balla, Boccioni, Carra, Depero, Sironi, Prampolini Bragaglia, Severini, Cangiullo and many others.

The exhibition chronicles the evolution of Futurism, unfolding along the different levels of the spiral of the Solomon R. Guggenheim Museum, modernist architecture by Frank Lloyd Wright, which is itself a total work of art. From the first level, where the viewer is guided through the first steps of this revolutionary movement, it continues (following a chronological path, though not strict) to the upper floors, where works by internationally renowned artists are displayed, emphasizing the global influence of this Italian movement. 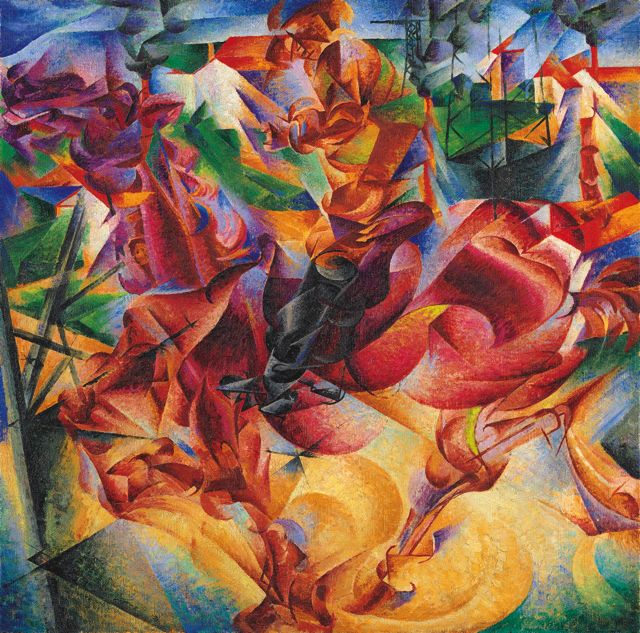 Futurism, which began primarily as a literary movement, was crucial to the development of modern art. The main idea was to give art a boost towards the new and the young, as opposed to the stale and dusty art of the academies and museums. Art should be free, according to Filippo Tommaso Marinetti, the first theorist of the movement, whom, later, also became a supporter of the First World War. He believed that the war would have brought Italy its lands and he also thought that the war itself “had a profound aesthetic value.”

The reputation of the Futurist artists has long suffered for a its closeness to fascist ideals, but today, it is clear that the movement was far more complex than Mussolini’s rhetoric. Taking the necessary historical distance from the events, Futurism can finally be analyzed beyond political judgment, even in America where as explains Green, "Futurism is not known at all”. From here comes the desire to bring these artists overseas and show their works to the large New York audience.

It is not only in America that this project is exceptional though. An exhibition of this magnitude dedicated to Futurism was made only once, at the Mole in Turin in 1980 by historian and art critic, Enrico Crispolti. "Back then the show had the same title and consisted an important analysis of the development of Futurism, typical of those years," said Greene during the press preview of the exhibition, this past Thursday, Feb 20.

Italian Futurism, 1909-1944: Reconstructing the Universe analyzes the drive towards Italian modernism of the early 20th century, from the Manifesto of Futurism by Marinetti of 1909 (of which the publication in the French newspaper Le Figaro is displayed in the exhibition) to the end of World War II when the movement, which in the meantime got closer to Fascism, was finally exhausted. 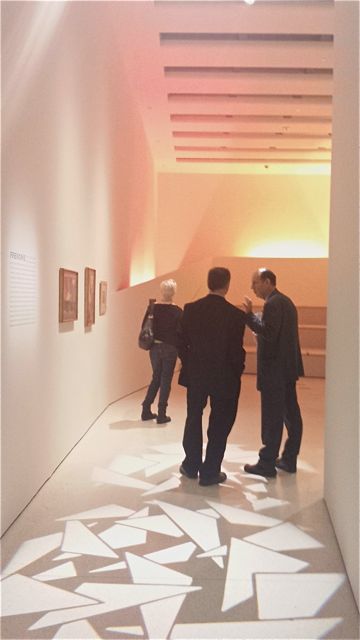 The exhibition consists of not only paintings, but also of numerous writings, such as the Manifesto of Poetry, various theater projects (as the famous serate, evoked through a space on the top floor where the walls are filled with games of lights and colors), sculptures, furniture (as the colorful dining room by Gerardo Dottori for Cimino’s home), and other objects such as the coffee cups by Giacomo Balla and the ceramic plates by Bruno Munari and Torido Mazzotti. Advertisements are not missing, which, in their vision of an art freed from the sanctity of tradition, the Futurists approached without snobbery well before Andy Warhol and Pop Art, creating graphics and logos for several Italian companies.

On display there are still modern poster ads designed by Fortunato Depero (whose works are featured in the exhibition opening on Feb 22 at The Center for Italian Modern Art) for the Italian brand, Campari Bitter. Depero is also on display in a painting made in his New York period, Skyscrapers and Tunnels (1930), which says a lot about the relationship of the painter with the "metrocubica meccanopoli."

The exhibition is sponsored by Caffè Lavazza, another Italian excellence, and marks the beginning of a 3-years collaboration with Guggenheim Museum. Lavazza is not new to the art scene: on the occasion of the 150th anniversary of the unification of Italy, it sponsored an exhibition on Leonardo Da Vinci, and also others by photographers whom helped the company develop its photography calendars. Furthermore, Lavazza has some common characteristics with Futurism movement. “We were born in 1895, 14 years before Marinetti's Manifesto. While he proclaimed his innovative ideals, we were working to create the company. So as he imagined the future, we did it, but we certainly did not imagine that one day we'd be here" Francesca Lavazza said at the exhibition opening.

Italian Futurism, 1909-1944: Reconstructing the Universe offers a multimedia journey through the developments of one of the most lively and complex periods in the history of Italian art. The exhibition opened on Feb 21st and will be on display until Sep 1.

Translated from Italian by Ludovica Martella