An almost cruel representation of a series of characters one more egotistical, spoiled, arrogant, and vulgar than the other. The film is an intense sensorial experience that involves touch, sight and hearing. The view of two American professors on Paolo Sorrentino's The Great Beauty which just won the Academy Awards for Best Foreign Film (Versione italiana qui)

In the English-speaking world, the word is “momentum.” With a Golden Globe, a European Oscar and a British BAFTA, that is what Paolo Sorrentino’s The Great Beauty had, and enough to take it all the way to the Oscars as best foreign language film.

People are taking about The Great Beauty, and have been talking about it for the last few months. More abroad than in Italy, perhaps. And it’s not hard to see why. The Great Beauty is “beautiful and ferocious,” to use the words that “la Santa,” the nun who makes her appearance towards the end of the film, uses to describe the novel Jep Gambardella, the film’s central character, published 40 years earlier.

And ferocious it is, above all in its depiction of the Roman intelligentsia who are at the film’s center. It is here that Sorrentino hits hardest with his almost cruel representation of a series of characters one more egotistical, spoiled, arrogant, and vulgar than the other. These are people he does not like. All of them, in one way or another, are artistic failures: a mute poet, a dramatist whose works are never performed, a conceptual artist who headbuts walls; a little girl obliged by her art dealer parents to produce works of art by throwing multi-colored paint on a huge canvas, all the time crying from the pain it causes her.

Even Jep, played wonderfully by Toni Servillo, and present in almost every scene in the film, is not spared Sorrentino’s arrows. He too is a failure. Author of a successful novel 40 years earlier, he no longer writes as he used to, and now makes his living as a journalist. He can’t find, he tells us, the “great beauty” that would inspire him to take up writing again and to live in a different, more stimulating environment than the one he lives in now, in the Rome of frenetic parties and depressed acquaintances. The film tells the story of Jep’s rebirth as a writer,a rebirth that in this film about films also marks the rebirth of cinema

The great innovation of The Great Beauty lies in how it manages to define film form and how form is central to the imagination and the elaboration of new vision. Like Jep, Sorrentino and his film develop new narative modes and styles: from the jump cuts accompaying the house music beat and rhythm of the awful parties and the “high life” scenes, to the swopoping camera of the film’s very first images filmed on the Gianicolo, to Jep’s often night time walks around Rome’s splendid streets, evolving to the almost pure cinema of the fantastic long take with which the film concludes. Filmed from a boat as it makes its way up the Tiber, Sorrentino’s camera dwells on the river, its flora and fauna, the buildings and bridges, panning from left to right and back again,showing us a solitray diver, people on bridges going about their daily business, Roma as a melting pot of many other cities, the symbol of a multi-dimensional, plural, and ancient story yet to be told, a story demanding a form that can tell it. Narrate the city: this is the great challenge that The Great Beauty sets itself. And in these last few minutes, as the pristine long take unfolds in front of us, it is as if Sorrentino wants to let the city itself speak, give it the time and space to expres itself in its own voice, tell its own story. It’s the city that speaks, that shows itself to us without the intrusive hand of writer or filmmaker telling us what it is saying. 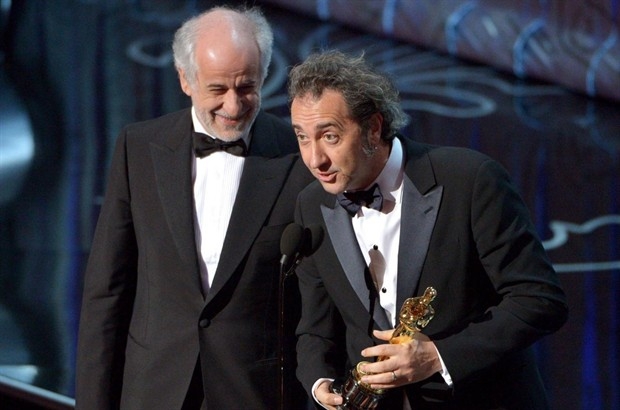 Toni Servillo with Paolo Sorrentino at the Academy Award ceremony

Sorrentino’s film is an intense sensorial experience that involves touch, sight and hearing; a film that explores and challenges our own act of seeing and feeling the world. The film goes into the hidden folds of our life and death, touching its mystery. Experience of the film and in the film is given to the spectator in the form of a quest, like a non-linear journey that holds within itself asonances and contrasts. The music of the film, for example, is sacred and profane, pop, rock and disco. The mix of the sublime and the vulgar is deliberately measured by the consciousness and eye of the film: Jep’s. Servillo is an actor in the best tradition of Italian male leads, but with his performance he goes beyond that tradition to give us something new and unseen, but while also touching on the ancient and the historical. Jep watches, observes, registers, speaks slowly with a wonderful Neapolitan accent, and he walks. He walks on his way home at night and as dawn breaks. He walks through the streets of the center of Rome, passing by and through its monuments, squares, its historic fountains and ruins, the wonderful gardens. Have we ever seen on screen a man who walks as much and as far as Jep? Antonioni had shown us his women characters in which he saw the new and the experimental as they took long walks, like Lidia (Jean Moreau) in La Notte, married to a writer lost in the world of the high life, played by Marcello Mastroianni. Antonioni had his women protagonists wander through the city streets dressed elegantly and with a sophisticated simplicity that hid their inner turmoil. Jep moves slowly, his bearing elegant, his body almost fluid, his movements sinuous thanks to his stupendous tailor-made clothes that caress the body, without swathing it; they are his soft armour, his shield against the ugliness and vulgarity of the world. Sorrentino’s clothes also speak with a Neapolitan accent. They were made by the Cesare Attolini Company, the taylors who, in the 1930s, revolutionized the construction of men’s jackets. Servillo himself chose the clothes he wore for the film, helped by the Costume Designer Daniela Ciancio. In fact, if Jep seems a failed writer, he triumphs with a refined elegance that is both traditional, but also the most modern example of “sprezzatura.”

To be sure, in the film there are a great many references to Fellini and to his great films, from the Dolce Vita, to Giulietta degli Spiriti, to Roma, to name only a few. But Sorrentino, in paying homage to his maestro, also shows a glimmer of originality of his own that allows him to go on with his explorations in cinema and take his art in new directions and assume new dimensions. This is why his quotations are neither out of place nor gratuitous, but are part of the fabric of the film and fit it and its spectacle perfectly.

Jep is the incarnation of seeking and wandering. He is often alone, apart from one occasion when, to remove himself from a high life party in which a little girl is forced into a painting performance, he suggests to the woman he is with, Ramona, played by Sabrina Ferilli, that they take a walk with an acquaintance of his, a gentleman who keeps the keys to several aristocratic Roman palaces in his briefcase. Here the walk is very different from the ones in theDolce Vita when aristocrats, high livers, American tourists are in a garden at night and take part in a seance. In fact, the cloak that Ferilli wears recalls one of the costumes worn by a signora in the Dolce Vita. The three of them, Jep, Ramona and the trustworthy gentleman (that is why he is allowed to have the keys) walk around Rome as if in a Theatre of Wonders as extraordinary works of art burst upon our and their eyes , stupendous and unsettling statues filmed in close-up (which recall a scene from Rossellini’s Viaggio in Italia when Katherine/Ingrid Bergman visits the Museo di Capodimonte in Naples). And paintings, including the Fornarina by Raffaello. Jep and Ramona, and we with them, savor the beauty, the hidden beauties of the city. Ramona above all. She is a very gentle character to whom Sabrina Ferrilli has lent a wonderful performance. Ramona is an outsider compared to Jep’s group of sad friends with whom he lives the high life. With her gaze and her questions she tries to understand, but not becasue she wants to be part of that world. She too travels, but she doesn’t know, due to her illness, the extent of which is only revealed towards the end of the film, when her journey will bring her to a premature end. Death runs through this film like a thread, from the very beginning when a quotation from Celine, on the subject of travel and death, appears on the screen: “Travelling is useful, it makes the imagination work […] It goes from life to death. Men, beasts, cities and things, it’s all invented. It’s a novel, nothing else but a fictional story […] and in any case, everyone can do the same. Just close your eyes.” A warning or an invitation to the film?

At the end, when La Santa asks him: “But why didn’t you write another book?”, Jep answers candidly and without mincing words as he had done throughout the film: “I was looking for the great beauty. But I didn’t find it.” And it is from here, in the film’s final sequences, that Jep is on a journey, to the Isola del Giglio where he contemplates the run aground Costa Concordia, a dead immobile ship, our “marine monster” of today, and then slowly the images flow to memories of his first time, to the wonder and innocence of his first love, Elisa, she too dead. The music intensifies. Jep appears in close-up and says: “It always finishes this way. With death. Before that, though, there was life….” And it is at this point that Jep pronounces the most constructive words of the film, as if all his wandering has not been in vain: “May this novel begin ………..”