Living in Rome, I am intrigued by the resilience of the Italian people and by the influences they accumulated throughout history. One monday morning, at the Quadraro, I found the influential resilience in a mural (Leggi in Italiano)

The resilience of the Italian people, along with their traditions, passion, mind-set and culture, is just one of the many reasons for their influential achievements in all aspects of life. To this day I am intrigued by these defining characteristics and their vast impermeable influences.

When much of Europe was still in a crude and barbaric chaotic state, men (and women) of the region of Italy were throwing around philosophical thoughts and theories like a rugby ball being thrown around at Six Nations Tournament at Olimpico Stadio a few weeks ago.

Throughout history and it's perpetual accumulation, many of these influences still hold true and are very much relevant today. It's cuisine and it's “cucinare professori” still hold up to be some of the best, despite the culinary world's constantly evolving fusions and gastronomy's boggling creations. From the fig leaf to Ferragamo, Milan, especially during Fashion Week, is still one of, if not the, iconic fashion mecca where designers, models, and photographers alike aspire to carve their own niche (stitch) on the runways and catwalks, also under the spotlight in the past weeks.

Where does all this resilient influence and influential resilience come from? 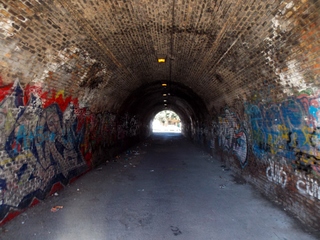 A recent personal example that comes to mind is a neighborhood in Rome I've been spending some time in. The Quadraro section of Rome. It lies to the north of Parco degli Acquedotti, and between Parco della Caffarella and Centocelle. The massive, central street is Via Tuscolana which acts as its 'vene cava'. During World War II the Germans nicknamed this place The Hornets Nest, due to it being a stronghold for Partisans and anti-Fascists standing up to the Evil Axis. I wonder if they're AS Roma or Lazio football fans, Hmmm.

What brought me there the other day, was another form of rebellion, this one in the artistic sense. A number of prominent street or graffiti artists from all over the world have chosen to adorn some of the walls of Quadraro with their murals.

I jumped off the Linea A subway at the Lucio Sestio stop and started walking north up the main vein of the neighborhood, Tuscolana. This being my primo viaggio to the QVIII section, I asked a couple passing by, in what was probably the crudest Italian they've heard spoken in a long time, directions to the cross streets I was looking for. The guy, probably in his early twenties, wearing a NY Yankees hat, black leather jacket, and Nike Blazers, points east and says: “Due strade più avanti e a sinistra.” “Grazie, mille”, I reply. Then with a slight smile and impeccable english he jokingly says: “Try not to get lost”.

I didn't plot any of the more famous 'muros' in my phone or on paper. I wanted to stumble upon these “Sistine Chapels of Spray Paint” organically. I immediately saw a few really nice pieces that were previously unknown to me and much of the globe, and took some pictures. Twenty minutes later I was lost and just one more minority in an already spicey “United Nations” stew that is the spirited flavor of Quadraro.

It was already past noon and the community was carrying on it's usual Monday mezzagiorno rituals. I stopped at a cafe, which seemed to be playing a Spotify playlist from Sanremmo, for a Peroni and an American Spirit to retrace my steps and re-plot my next course. I walked on, at this point not knowing if I was heading deeper into the 'nest' or, towards France. A few moments later, determined not to be saved by Google Maps or a good samaritan, I take a left turn at a mechanics garage, and I discover a superb mural decorating the entrance to a tunnel for an underpass beneath Tuscolana that just happens to be a few blocks away from the Porta Furba subway stop. Now that's the Italian influential resilience I was talking about. Ciao.