In the documentary Men of the Cloth by Vicki Vasilopoulos, the ancient art of master tailors, pride of Italian style in the world. The film was presented at the Casa Italiana NYU in the presence of two of the protagonists, Nino Corvato and Joseph Genuardi. The history of these craftsmen helps us to rethink the neo-liberal economic models (leggi in Italiano)

It was a full house at the Casa Italiana Zerilli-Marimò on Tuesday April 1st for the screening of Men of Cloth. Some people, including some of my students from CUNY, either had to stand at the back or sit on the additional chairs added at the last minute to accommodate the crowd; some couldn’t even enter the room.

The film was followed by a lively discussion with director, Vicki Vasilopoulos, and Master Tailors Nino Corvato and Joseph Genuardi, both featured in the film. Some people did not want to leave, so eager were they to ask more questions. The evening, graciously organized by director Stefano Albertini, was a tangible sign of how important and timely Men of the Cloth is.

The film is a rich human and historical document on the craft of couteur.  It bears repeating that tailors have embodied the best of both the Italian tradition and Italian innovation that is now known globally as “made in Italy.”  This now a metabrand and is identified with a series of complex meanings that are being analyzed by scholars from a variety of disciplines who are dedicating to it the attention it deserves (as is attested by the huge show on the glamour of Italian fashion from 1945 to today that has just opened at the prestigous Victoria & Albert Museum in London).

The importance of a history soaked in humanity and dignity is the central concern of the documentary. It is not by chance that in the epigraphs, the informative texts that precede the documentary, explicit reference is made to the Itaian sartorial tradition and its deep roots in the Renaissance.  In fact, it is in the Renaissance that we find the first portraits of tailors; one of these is by the Bergamo-born painter Giovan Battista Moroni (ca. 1576). In the same period a Milanese tailor,  Gian Giacomo Dal Conte published a catalogue illustrating the models of clothes he produced in his own workshop, as well as testimonials–Renaissance celebrity spokespeople―like the Emperor Charles V who is depicted wearing Dal Conte’s creations.

These paralell stories are told to us through testimonies of the lives of tailors.  The “Master tailor,” the term used to describe the owner of the workshop, was also considered a master of life, even beyond the confines of the workshop, for the training of the young apprentices who began to learn the art of the tailor from an early age.

This, though, is a part of Italian life and culture that risks extinction.  The artisans’ workshop whether of a tailor, a cabinet maker, and other crafts, their accumulated knowhow and the famous Italian dexterity that the whole world envies were at the heart of the success of Italian style.

Men of the Cloth, in fact, present at Tuesday’s event, are the Masters Nino Corvato, of Sicilian origin, who told of when he came to New York from his small Sicilian town and, how with his talent, work ethic and determination gradually built up his workshop, which is still today in business on the prestiguous Madison Avenue. Also in the film, Joseph Centofanti (1918-2011), who had his business in Philadelphia, tells of how he followed his passion and how he had learned from a tender age the segrets of sewing and clothes making. So successful was he that even during periods of economic crisis his business was profitable. He goes on to talk about the fascist colonial period, when he was in Ethiopia, and shows his book (a kind of Tailor’s Bible) in which he keeps pictures of the uniforms he created for Italian soldiers.

The passion, the pride, the dignity of the work of Mr. Signor Centofanti was transmitted to a young tailor, a certain Joseph Genuardi, who―one Sunday morning―walking past Centofanti’s business  asked to be taken in as an apprentice after having earned a college degree. The film, then, spans both older and newer generations, such as Genuardi who learnt and developed his art alongside his master. Now, in fact, Joseph Genuardi is Head Tailor at Martin Greenfield in Brooklyn, one of the suburbs of New York that is at the forefront of the development of new creative industiries in a varity of sectors. 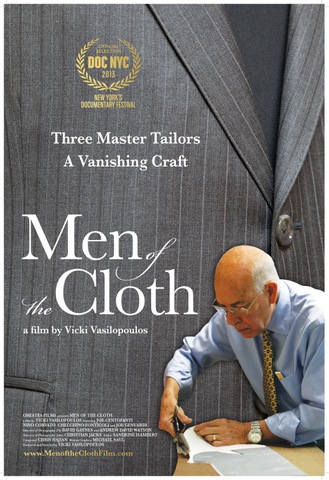 The rich experience enjoyed by Genuardi, born in America of Italian origins, is similar to that Angelo Di Febo, a young man trained at the Penne tailors’ school founded by Brioni  in Abruzzo. In the small town of Penne, we meet Checchino Fonticoli, whose uncleNazareno Fonticoli and his business partner Gaetano Savino founded the first Brioni workshop in Rome’s Via Barberini immediately after World War II. The Brioni menswear line was featured in1952 at the famous Sala Bianca shows in Florence, alongside the women’s wear of Simonetta, Fontana, Pucci, Shubert etc., which launched the notion of Made in Italy in the world.  Mr. Fonticoli tells of his work with Brioni and we see the Penne school where young people learn the art of tailoring. It was here that Angelo Di Febo, one of Brioni’s  stars and who now travels the world, especially to Asia, learned his craft. Online blogs are full of images of his work and interviews in which he speaks of the future of male couteur.In the documentary, Di Febo speaks of the attention and care that must be deidicated to the various phases that go towards the building of a jacket,  the soul of the suit. It is a job that demands concentration and is in many ways similar to the craft of writing insofar as it is a process in which various pieces are put together harmoniously leading up to a final edit, the moment ofpressing, before delivering the suit.

Over the last few years, great interest and attention have been paid to male couture and the power of the suit. This is due to a number of factors. The need to reconsider the value of knowhow  and manual dexterity in an age of fast fashion. This attention is not only present in the world of luxury goods, but also in that of newer brands that explore the opportunities offered by the craft economy. In the world of culture, it is worth recalling that a great deal has been written and is being written on men, identity and masculinity. In addition to the study of men’s clothing, there is a field of study that goes under the name of Men’s Studies. Growing attention is also being paid to ethical questions that touch on the environment, sustainability and working conditions. These are important attempts to eliminate the still massive presence of sweatshops in which workers, often women and children, many of whom risk death every day in the workplace,  as the recent massacre in Bangladesh shows, produce clothes for megabrands in conditions that resemble those of the 19th century . A disgrace that lies on the conscience of us all.

Vicki Vasilopoulos’ film touches on important issues and leads us to reflect on the limits of an unregulated neo-liberal economy, on questions of social justice, how to rein in an insane consumerism and waste, how to foster and train new generations of workers and citizens and imagine new dimesions and conditions for manual work that exalts its noble dignity. Men of  Cloth also helps us to understand what our respnsibilities are and that politics means changing how we look at the world, how we know the secret folds of history and build, from ourselves upwards. Although the great ideologies may have had their day, real politics is still alive elsewhere. It lies in the daily work of humanity, in the passion of achieving a dream such as that of our tailors Corvato, Centofante, Fonticoli, Genuardi, Di Febo. Theirs is a great example of work, clarity, and intellectual honesty.  This is what is needed today, especially in Italy.

*Eugenia Paulicelli, Queens College and Graduate Center, The City University of New York, was one of the panelist at the round table at Casa Italiana NYU following thr screening of Men of the Cloth.