Born and grown up with computers, smart phones, social media, these new students have a very short attention span, have no more interest in verbal communication, do not read, and no longer have a "normal" cultural background. But can these "New Humans" become a form of "Collective Intelligence?" (Leggi in Italiano)

I have been teaching Italian at The New School University for decades, and have every kind of qualification — a degree in Education, 8 certificates in teaching and learning, 9 seminars teaching language teachers, several ‘technique’ workshops, 4 Italian textbooks published. I’ve been Coordinator of the Italian Department at the New School for 21 years, and received a Distinguished University Teaching Award, but nothing has prepared me for the ‘new’ students of the past few semesters.

I call them the “mutants”, a term used in science fiction movies when extraterrestrial conditions modify the “genes” of a part of the population. The cause of this genetic change in my students is …technology! Born and raised with computers, smart phones, and social media (FaceBook, Twitter etc.) these new students have a very short span of attention (a few seconds here and there). They are no longer much interested in verbal communication; they don’t read anymore; they no longer partake of the “cultural background” considered “normal” up to a few years ago (“Who on earth is Robert Kennedy?” “Who is Sofia Loren?” “Roberto Benigni?”). They don’t know how to take notes anymore, they are unable to conceptualize or string together two concepts. The learning activities that were very successful in class up to a few years ago, no longer work with them — “What? Do I have to get up from my chair?”

“Do I actually have to speak to someone?” Games and instructions that used to be obvious, now require long explanations…

They don’t even use the phone anymore. Mere “talking” is outmoded! Difficult discussions with their parents are now done with text messages.

I hear professors of other disciplines say: “These students don’t know anything anymore!” Handwriting is considered obsolete. Pens are …like “clubs” –who knows how to use them anymore?

At the New School (always innovative) they have created a new division – “Digital Humanities” trying to meet the needs of our tech students, and some teachers already teach with the help of FaceBook… The old syllabus is abandoned – even the use of emails! Some students only ever write text messages!

And here I am, reduced to desperation, in my Intro Italian 2 class, at The New School (see photo above).

What is to be done? You improvise, you becomes creative… you can’t just ignore what is happening… It’s still important for me to communicate, even with these “aliens”, and as a teacher I really want them to learn Italian. So I am trying everything possible to make them learn something…One day I

copied out some articles from “La Voce di New York” that I thought might possibly interest my students.

There was an article about “The Italian Fairy” – Italian culture for children; and a new multimedia ecology show “Sempreverde, which means “Evergreen” – I had seen this show and thought it was fantastic! – also articles on domestic violence; Renaissance studies in New York; my home town, Turin; one about young Italians who meet up in New York; one on the Mafia and even one about buying a piece of land on the Moon.

My students chose the article that most appealed to them. I told them to read it closely and then write two paragraphs about the main idea of the articles. Success! They did this assignment well and seemed to be interested. 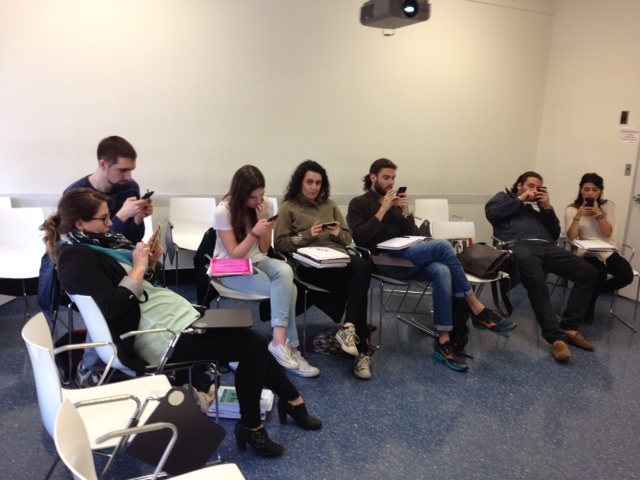 Next lesson – I wanted to talk about the Italian singer Zucchero, but no one was paying attention until I announced “ Now, search on your cellphone – “Zucchero”. Then each of you can tell the class what you found out”. Suddenly they were all smiles -“cellphone? you mean we can search on our cellphones?” For them the cellphone is like a bodily extension, a permanent part of their hands. Professors never succeed in making them put their cellphones away during classes; so I had to repeat “Yes, use your cellphones! They are amazingly adept at finding obscure details in an instant. So in less than five minutes we were overwhelmed with intriguing information about Zucchero.

Seeing the success of the “cellphone”, I told them to go directly to the website of “La Voce di New York” and choose a topic from the various sections – Culture, Politics, Current Events etc – find something that interested them, and then tell the class what it was all about.

In my opinion this Italian online newspaper – the “Voice of New York”- is fantastic! First of all it doesn’t cost anything; it’s easily accessible, and it also has an archive of past articles so that the range of choices is huge. These articles are written in a fluent modern Italian, avoiding journalese and archaisms. so students can read and understand them fairly easily. As for the words they don’t know, they can use the automatic translator and find out the meaning immediately!

I’m eager to share my experience, and I would like to open a dialogue or a blog with other professors and students, to see if we can come up with new methods and ideas that are effective for learning a foreign language in this constantly changing world, where books are already old even before they get published. In the Fall I should like to do a “pilot-class” in which students choose a subject and then create their own book in Italian, looking up information and pictures on different sites… 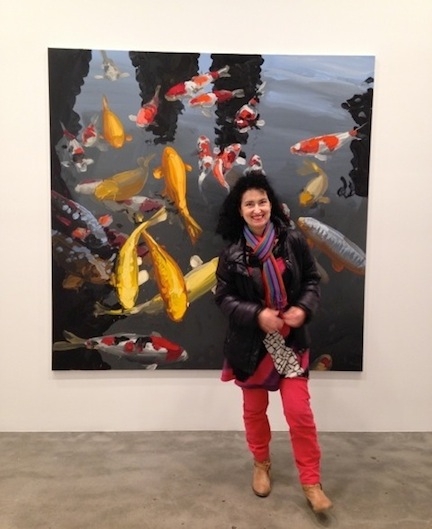 Last night I saw a documentary on “NOVA-Science” (PBS) about different types of intelligence. They showed a kind of plant moss, each cell of which is not particularly “intelligent” at the individual level, but these cells work symbiotically all together, and they have a collective intelligence comparable to our own. Ants, bees and certain types of migratory birds share similar kinds of collective intelligence.

I wonder: “Could these student Mutants, always connected among themselves, and now in touch with the whole world, be the “collective intelligence” of the future?” Perhaps after the development in our time of individualism to its extreme – which has among its consequences – tyranny and wars, life is evolving a collective human intelligence to make us more aware of our fundamental unity –as all spiritual traditions teach – and maybe make us finally aware that if we destroy our “Spaceship Planet” we destroy ourselves with our Mother Earth.

*Caterina Bertolotto, graduated in Turin, Italy. She has been teaching Italian at The New School for many years. Caterina is also an artist and has done many collaborations in the areas of theater, dance and opera.