The history, architecture, stunning scenery and local products grown in the southern sun have always attracted celebrities, artists, and intellectuals from all over Europe to these shores. And don't forget to make a detour to Pompeii, Herculaneum and Posillipo (Leggi in Italiano) 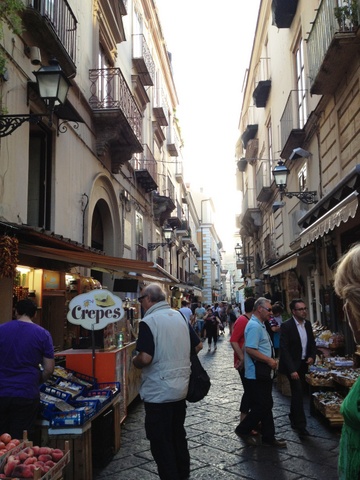 Legend has it that the waters around the Sorrento Peninsula were once inhabited by the Sirens, who lured sailors passing by. The charm of this small village perched on a cliff overlooking the sea still maintains its haunting beauty. What makes Sorrento so unique and memorable? The scent of orange and lemon trees, the gentle breeze that blows from the sea certainly speak to its aura, but mostly it is the centuries of history tangible in the old city walls and ancient doors, and the amount of historic buildings and places of worship that make Sorrento an unforgettable place.

Sorrento has always been a destination of choice for international celebrities. It was a retreat for famous figures throughout the recent history of European culture. Aestheticians such as Goethe, Lord Byron and Giuseppe Verdi, to name a few were drawn to Sorrento because of its beauty. It was also the birthplace of Torquato Tasso.
Sorrento has been inhabited since Neolithic times. With Greek origins and, in imperial times, a city hall, Sorrento became a favorite holiday retreat of the Roman patricians. Under Caesar and Augustus the coast began to flourish with splendid villas. 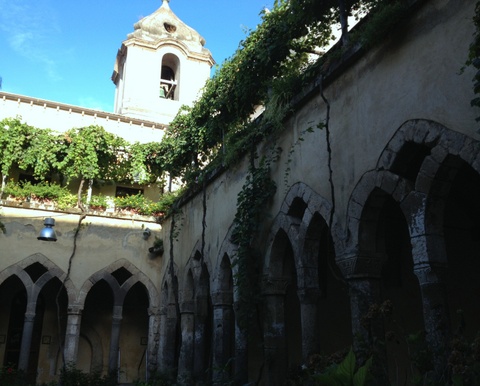 The Roman structure is visible in the historic city center through its decumani and outcrops of ancient ruins. The columns of the temples were reused in the construction of churches, such as the church of St. Anthony; the patron saint of the city. The side doorway of the church dates back to the eleventh century. The Cloister of St. Francis is also of great beauty. The church of St. Francis, attached to the cloister, was built in 1500 and rebuilt after the earthquake of 1688. On two sides of the portico, the arches are made out of tuff from the late fourteenth century. On the other two sides it has round arches on hexagonal pillars. In summer the cloister hosts important cultural events.

The museum Correale di Terranova is definitely worth a visit; a harmonious eighteenth century building which houses an art collection donated by the Counts of Terranova, an ancient family of Sorrento. There are several preserved pieces of archeology, paintings and decorative art works, however, the most impressive area of the museum is the Sala dei fondatori (Founders' hall). It is a small private chapel with a delightful collection of nineteenth century marquetry. Also featured is the Sala degli specchi (Hall of mirrors), where portraits of the ancestors of Correale are on display.

Venturing through the steep streets towards the sea, you will come across the picturesque fishing village of Marina Grande. There you can admire the ancient Greek door in all its splendor. The door was, until the fifteenth century, the only access point from the sea. A little further stands the door of Marina Piccola, with its Chapel of Santa Maria del Soccorso set in the rock.

On the south side of the promontory, a few kilometers from Sorrento, you will find Nerano Bay. This suburb of Massa Lubrense is a picturesque village steeped in history. It is on the tip of the peninsula and has beautiful views of the island of Capri. 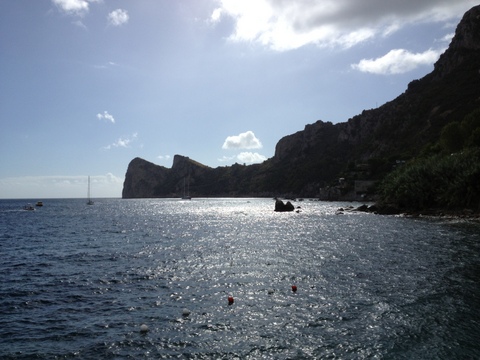 Also unforgettable is the walk to Punta Campanella in which you must travel through lush Mediterranean vegetation – olive and citrus groves. Here the raw material that give life to one of the most famous local products, the fragrant Limoncello, are found. Another curiosity is the extreme edge of the peninsula that seems to touch the island of Capri, called Punta Campanella. It was named by King Robert of Anjou who in 1335 built the Minerva Tower. It was later rebuilt in 1566 as a defense against pirate invaders.
Of the 17 hamlets of Sorrento, Marina Lobra is worth the walk. It is a fishermen village of delicate charm, where a shrine of the same name stands. It was rebuilt in 1564 on a Latin cross layout with an attached convent from 1583. Offshore, next to the rock of Vervece, and 15 meters deep in the water, is a bronze statue of the Virgin Mary, the patron of divers. Here, every second Sunday of September is celebrated not only by divers but also by many local devotees.

Going up the peninsula inward, towards Salerno, brings more worthy attractions. Agerola is the birthplace of mozzarella. It is situated on the slope of the mountains Lattari. Agerola has a typical alpine landscape filled with rich chestnut woods, orchards, and two panoramic viewpoints. One is located at the cape of San Lazzaro, where you can admire a breathtaking view of the Amalfi Coast and the island of Capri. The other is inside San Lazzaro, overlooking the sea and what is now the ruins of the Castle Lauritano which dates back to the eleventh century. It was built by the Republic of Amalfi for a better viewership of the Saracens invaders from the sea. 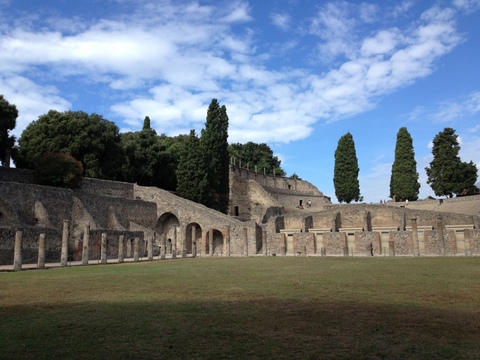 If you've come all the way to the Sorrento Peninsula you cannot skip a visit to Pompeii and Herculaneum which both made their place in history by the great and spectacular eruption of Mount Vesuvius in 79 AD. Fortunately, in this magnificent city remain beautiful treasures. Pompeii was hit by a rain of ash and lapillus while Herculaneum was covered by a flow of lava of enormous proportions. A visit to the archaeological site (now called UNESCO World Heritage Site since 1997) is a dive into the past where one can explore the ancient splendor of the Roman Empire.

In addition to fans of ancient history, Pompeii also attracts pilgrims from all over the world. One destination of religious tourism is the Shrine of Madonna del Rosario which houses a huge number of votive offerings of great value. Built over times, the sanctuary was erected between 1876 and 1891 on a Latin cross layout with a nave. Between 1934 and 1939, to accommodate an increasingly large number of pilgrims, the original structure was expanded with the construction of two aisles. The devotion to Our Lady of Pompeii is so strong that it followed immigrants to New York where, in the West Village, there is a church dedicated to this Madonna.

Before leaving this magical place, it is worth a detour to Posillipo, a residential village in Naples. In the time of Ancient Rome, the hills of Posillipo were dominated by beautiful villas of which only ruins remain today. Of these villas, the most famous is certainly that of Vedio Poliione, who named his villa Pausilypon (which means ‘freeing from worry’).
It is now time to leave behind the ancient history, unforgettable views, the supreme blue sea, and the intense flavors that only the sunny South of Italy could give birth to – this land so beloved by writers and artists. But the chants of the Sirens will remain in the hearts of Sorrento’s visitors for a long time.

Thanks to a mild climate, you can visit Sorrento in every season. The choice of where to stay is difficult, as there are so many offers for all budgets and all tastes. One of these, in the typical style of Southern Italy, is Palazzo Jannuzzi Relais *****, located in the heart of Sorrento with breathtaking views of the sea. Serving unforgettable breakfast with the most fragrant and tasty fruits of the season alongside the superb sweet and savory pies made by Simona. 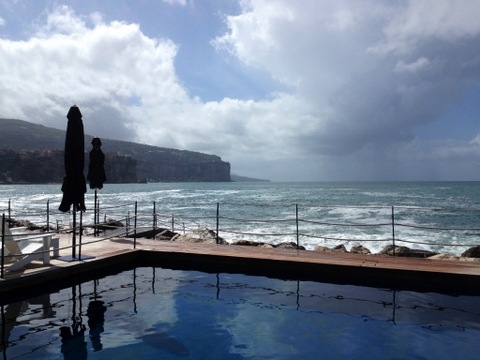 For those who decide to treat themselves to a romantic stay in a five-star hotel, away from the crowd of tourists, the place to go is the Hotel Capo La Gala *****, nearby Vico Equense. It is beautifully set in a small bay overlooking the Gulf of Naples. The rooms are notable for their seafaring Mediterranean style, and one of them even has a private swimming pool. The restaurant is a Michelin-starred where the chef Danilo Di Vuolo serves authentic Neapolitan cuisine reevisioned in a creative way. 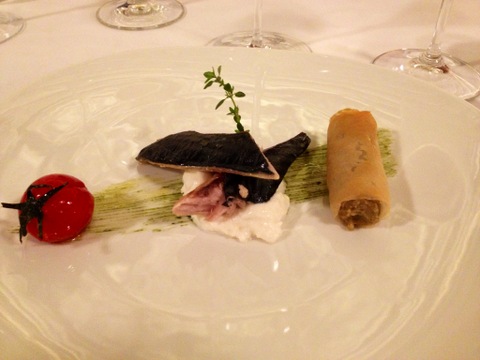 On the Peninsula there is the highest number of starred restaurants in Italy. So why not get lost in the sublime delights expertly prepared by Chef Joseph Aversa of Il Buco, where the worship of excellent raw materials finds expression in a creative cuisine that is never dull, with a perfect balance of flavors?

For those who love to enjoy the excellent seafood 'pied dans l'eau', the ideal stop is Lo Scoglio in the Bay of Nerano. People come from all over to enjoy not just the excellent fresh seafood, but also the house specialty; spaghetti with zucchini …. Memorable!

In the center of Pompeii, a short distance from the sanctuary, Paolo Gramaglia, eclectic executive chef of the President gathers in his dishes memories of experiences in the Caribbean lands expertly combined with its Neapolitan origins. One for all, the amazing fried whitebait of the Bay of Naples on a bed of fried noodles and julienne vegetables in tempura. Last but not least, the restaurant boasts one of the richest and most prestigious wineries of Campania.

In Posillipo, stop by Rosiello in the beautiful Gulf of Naples, between Vesuvius and Capri. Vegetables from the private garden located by the restaurant, fine wines from the family's cellar with prestigious labels, and seafood of the highest quality. Finish your meal with Carmela's famous tarts prepared with local products. They are as sweet as the memory of this enchanting sun-kissed land.

For a hand-crafted Limoncello​, the place to go is I Giardini di Cataldo, which also boasts liquors made from basil, nuts, licorice and even fennel.

In the mozzarella capital go to Gennaro Fusco to stock up on dairy products. The  fiordilatte stands above all and is shipped all over the world. Also produced here is an unforgettable Provolone del Monaco.