The assembly began with a focus of banishing the gamut of global dilemmas and quelling the rapid-rate multiplicity of crises.

“The world’s ‘fasten seat belt’ light is illuminated” were some of the first words that emanated from UN Secretary-General  Ban Ki-moon’s lips during his opening speech at the 69th session of the General Assembly on Wednesday September 24th.

“Barrel bombs and beheadings; deliberate starvation of civilians and assault on hospitals, UN shelters and aid convoys – human rights and the rule of law are under attack,” said Mr. Ban, who added that regarding the principles enshrined in the United Nations Charter, “2014 has been a terrible year so far.”

As always, the annual high-level meeting kicked off with bringing to the forefront actions the heads of States have taken in sowing seeds of hope for the post 2015-agenda of global sustainable development. The meeting discusses initiatives launched in order to accurately nurture the new ideas into bigger, precise and effective results. “That is our duty. That is my call to you today,” Ban said.

That was just the beginning of the week-long gruel over matters around the globe. By the closing session of the GA, Tuesday September 30, the main theme was engulfed by the discussions of the squadron of global gruesome anguish in current focus.

The United Nations High Commissioner for Refugees (UNCHR), António Guterres, spoke at the annual Executive Committee event, saying that since the end of WWII the world has never seen such a vast amount of  displaced persons, neither has there been such an occurrence of refugees and asylum seekers. “Having to cope with five “full-blown humanitarian emergencies this year required a widening of operations,” added Guterres.

From Ukraine’s unpredictable situation to South Sudan’s death toll [ranging in the tens of thousands and an increased level of famine].

From the ongoing Syria crisis [affecting all neighboring States, while causing drudgery to the international global humanitarian system] to the Palestinian-Israeli widening rift.

And from illicit drug trade and organized crime in Mali, the Sahel and The Central African Republic – these are only just some of 2014’s hindrances to achieving peace.

Kings and presidents; prime ministers and special envoys took the stage to speak on behalf of the 193 UN Member States, while under the watchful eyes of two observer delegations, as they reverberated the statement that the globe seems to be moving toward extreme turbulence. “This year, the horizon of hope is darkened,” said Ban Ki-moon. “Our hearts are made heavy by unspeakable acts and the deaths of innocents,” Mr. Ban told heads States.

Guterres mentioned that the UNCHR has become overstrained to a point of risk as it faces a too-wide amount of crises and conflicts. He said that with the exponential increase in current global needs over the last three years, the humanitarian financing system is now almost depleted.

“Never before has the United Nations been asked to reach so many people with emergency food assistance and other life-saving supplies,” Guterres said. He also spoke about the larger amount of deployments [up to 670 new emergency staff members], the urgent recruitment of hundreds of aid workers, the shifting of staff members between existing and new operations. “The over-expenditure of collected humanitarian funding that had reached a record-breaking amount of $22 billion in 2013 is no longer sufficient to keep up with accelerating demands.” 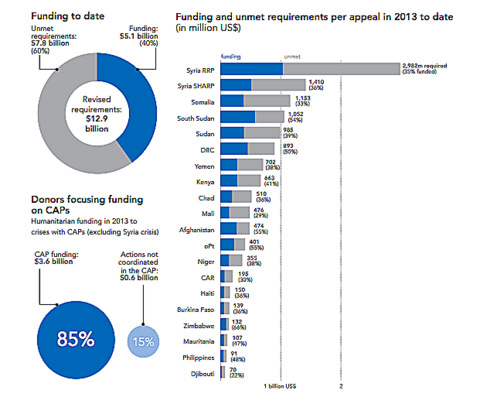 But in every dark cloud there has to be some fathomable silver lining the optimists’ view. According to the UN’s annual report of its work  there has been a 50% decline in global poverty, child mortality and maternal deaths. Classrooms, clinics and other normally unreachable areas rank high in significant headways have been made toward the development agenda. “It may seem as if the world is falling apart, as crises pile up and disease spreads and hope may be hard to discern, but it is there. Everything is not entirely bleak,” Mr. Ban egged on.

With many leaders introducing several other issues, such as climate change/global warming and rising sea levels, massive displacement, the constant fight against poverty, etc., Minister of Foreign Affairs and Immigration, Frederick Mitchell said “The obstacles are many. The lip service is evident. Talking about the issues is indeed important, but more than that has to be done.”

Mr. Mitchell stressed that the post-2015 sustainable development agenda must be people-focused as there are other [just as] important issues. Former President and Special Envoy of the President of the Republic of Maldives Mohamed Waheed Hassan took the podium and echoed  that statement, adding that emphasis has to be placed on the need to center all development agenda in human rights. He spoke of policies that need to be rights-based, and also that the people must be rights-minded – especially regarding gender equality.

“How many women have spoken at this podium so far? How many countries can claim to have achieved parity between men and women at decision-making levels,” he asked, while lauding Maldivian women as being some of the most emancipated in South Asia and reiterated the statement, “More needs to be done around the world.”

Mr. Ban stressed the necessity for gender equality in order to achieve transformation development goals. “I can think of no better place to start than with opening doors and shattering ceilings for women and girls,” he said. “Look at any crisis – from poverty to disaster, and from disease to illiteracy – and you will see women and girls suffering the most. We cannot fulfil 100 percent of the world’s potential by excluding 50 per cent of the world’s people.”

“The General Debate is indeed the world’s premier political global stage,” said General Assembly President Sam Kutesa  of Ghana. “It serves as a unique opportunity to recall the intrinsic value of our mutual engagement in the work of this Organization. More remains to be done, but these and other gains show the power of the Millennium Development Goals and what we can do when we work together. Today an inspiring global conversation is taking place on an agenda for the next 15 years.”

Other calamities such as the thousands of refugees fleeing across the Mediterranean; the unpredictably increasing and interlinked global problems; plus lingering droughts and massive floods that further endanger small countries’ already-imperiled economic base. These factors question the adequacy and sustainability of available resources for humanitarian response.

Minister of Foreign Affairs and Foreign Trade for Barbados, Maxine McClean, spoke out in drawing attention to the necessities of small island states and urging international communities to make provisions for those developing countries. “We continue to suffer the devastating impacts of the global economic and financial crisis and have limited scope, capacity, fiscal flexibility or policy space to respond effectively to them,” she said.

Mr. Guterres, who called on Member States to work toward better resolutions in quelling the tensions that lead to humanitarian tragedies, suggested that prevention was ultimately the best philosophy. Grievingly he said, “We humanitarians can no longer clean up the mess. Someone has to stop it from happening in the first place.”

Concluding remarks by Mr. Ban highlighted that in trying to bring about quicker agreements and resolutions to problems, more creative strategies have to be used. He stressed that humans play a very high role in creating many of the world’s crises, therefore it is now the world’s responsibility to eliminate them.