They were 26 coming from Abruzzo to perform for the Orsognesi d’America in their two most populous colonies, Boston and Queens. In Astoria they performed in front of a large audience with traditional songs and dances from Abruzzo and other regions of Italy. The pièce de resistance was the Saltarello where the women dance balancing copper amphorae on their heads (Leggi in italiano)

On the last night of November, upon the surprise invitation of my old friend Sandy Auriti, I visited Riccardo’s on 21st Street in Queens for the Dinner Dance and Performance of the Coro Folkloristico “La Figlia di Jorio”, founded in Orsogna, provincia di Chieti, in 1921, now the oldest Folkloric chorus in Italy, and now visitng the United States to perform for the Orsognesi d’America in their two most populous colonies, one in Boston and the other in Astoria. Sandy is from Orsogna. 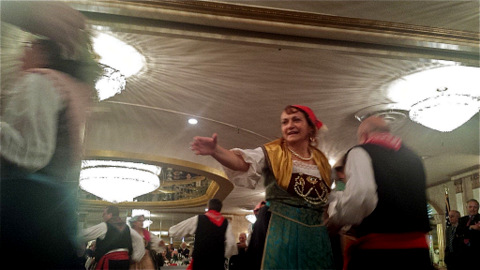 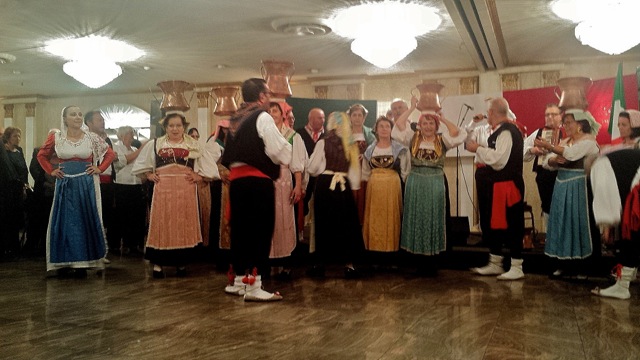 ​The choral director Mario Tenaglia has the same family name as my first friend in Astoria, Donald Tenaglia.  The room was filled with Orsognesi, and I felt at home because my mother was from Salle, also in Abruzzo. Not very near to Orsogna in Italy but cheek-by-jowl in Astoria when my mother was growing up there. I have been so long away from these people that I felt like Odysseus in the Underworld. We spoke of friends so long out of mind that we were pleased even to hear some one else mention them by name. There were very many people there. The populous Orsognesi and the less populous Sallesi have joined together in a single club, and there were at least 350 people there for dinner and the performance.

There were 23 choristers, two accordionists, and the director. The performers all wore the handmade costumes “di una volta,” complete with traditional coiffures and jewels. As musicians they were truly remarkable. Their chorus descends from a much older Schola Cantorum, which flourished in Orsogna in the 1800s, and with the accompanimento spiccato of the two fisarmonicisti, they drew the crowd into their interwoven melodies and harmonies in a program of Abruzzese folksongs, followed by songs of other regions, including ones that all Italians can sing, “O Marinariello” (Napoli) and “Ciuri Ciuri” (Sicilia).  When the crowd knew the song, they joined in, sometimes to amazing effect. Everyone knew the words of the Italian national anthem and of “O Marinariello.”

This singing went on for a long while, and everyone in the room followed it with the kind of delighted attention that any performer hopes to elicit. The pièce de resistance came at the end of the program, when the choristers danced 'a tarantella, 'a quadriglia, and, best of all, the famous saltarello where the women dance balancing copper amphorae (conche di rame) on their heads.  I have heard of this dance all my life, but had never seen it before. My mother said woman was not considered marriageable until she could do this dance, with the conca filled with water.  You can see this feat performed in the dance (on my iphone video), where each woman has a man dancing around her making whoops and whistles that suggest intense interest.

And the meal was good too.

*Robert Viscusi is a writer and professor at Brooklyn College, CUNY. It deals with culture and Italian-American literature.