During the mass protest against the decision of the grand jury on Eric Garner's case, last Wednesday the NYPD arrested hundreds of protesters. A night waiting for their release with the volunteers of legal support and a group of Jewish activists becomes an opportunity for discussion and exchange (Leggi in italiano)

Many people have been under the assumption that the actions in response to the non-indictment of Daniel Pantaleo, the cop who killed Eric Garner, were spontaneous. Quite the contrary; though many protestors heard about the actions through social media or word-of-mouth, numerous activist groups have been planning these actions for some time under the title This Stops Today. The group put a call to action out to 76 other organizations. They have compiled a list of five demands they are presenting to the public. While many detractors claim that the movement is illegitimate because it lacks clear leadership and goals, this information remains freely available.

On December 4th, the second of two long nights of protests in New York, I had been contacted by a Jail Support team working for the National Lawyers Guild. A member told me that arrestees are generally released from the Police Plaza (where the NYPD often detains large numbers of protesters) five to seven hours after their arrest. I was asked to meet there at 1:00am, and when I did I found roughly a dozen people, many regulars, others from Jews for Racial and Economic Justice, and others who were first-time volunteers. Volunteers were trained to answer questions that may come from arrestees. There was also food, water, gloves, and cigarettes among other things that could help comfort arrestees. 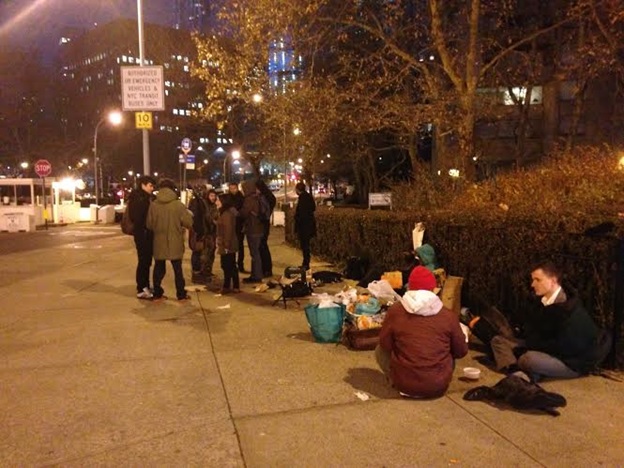 Volunteers waiting for the release of the arrestees at Police Plaza. Photo: Alexander Rubinstein

Despite the bitter cold in the early morning hours on December 5th, the Jail Support culture seemed to be one built on professionalism and teamwork. Alibaba Market, across the street, would let members and arrestees have a seat and warm up, even if they weren’t paying. These supportive sentiments could be heard echoed throughout the entire city, whether it was black cabbies holding their hands up and honking their horns, or businesses that became dedicated safe havens for protesters, like the Feminist bookstore Blue Stockings in the Lower East Side. When arrestees were released from the plaza, they were greeted with cheers and hugs. After the support team had made sure that they’d not been injured and that all their comfort needs had been met, they were asked for fill out a NLG form, so that their lawyers would be better able to find and support them during their court appearance. Arrestees at protests are often given only one, or just a few separate dates to appear, so mandated court appearances for victims of mass arrests often become less like the usual agonizing journey through a bureaucratic system with several thousand financial incentives to ruin your life, and more like a reunion party.

I spoke with a member of the Jail Support team who was able to provide their statistics from the actions on the 3rd. According to him, 83 people had been arrested. Of that, 45-50 had received desk appearances for disorderly conduct, which is a violation, not a crime. Though less than 10 people will be arraigned, all were released without bail. The majority are being charged with subsection 5 and 6 “obstructing vehicular or pedestrian traffic” and “congregating with other persons in a public place and refusing to comply with a lawful order of the police to disperse” respectively. Another 20 are suspected to face similar charges, but the NLG was unable to establish contact with those individuals. I was unable at that time to get statistics for the 4th, though the NYPD claims to have arrested 223.

Another jail support member was able to shed some light on the legal struggles of some activists, cases that the NLG and others are following closely, including Noche Diaz who is currently facing 11 charges by the NYPD for the five arrests he’s accrued since October of 2011. Diaz is a well-known activist, and all of his arrests were related to filming and protesting illegitimate police actions. She also told me of the case for Diego Ibanez, who allegedly threw fake blood at NYPD commissioner Bill Bratton, during a recent protest. The charges Ibanez faces, including one for second degree assault, classified as a violent felony, could be used to sentence him to 14+ years in prison.

Included in the jail support team were several members of the group Jews for Racial and Economic Justice (JFREJ). They’re headquartered in Midtown, but they have members throughout New York State. 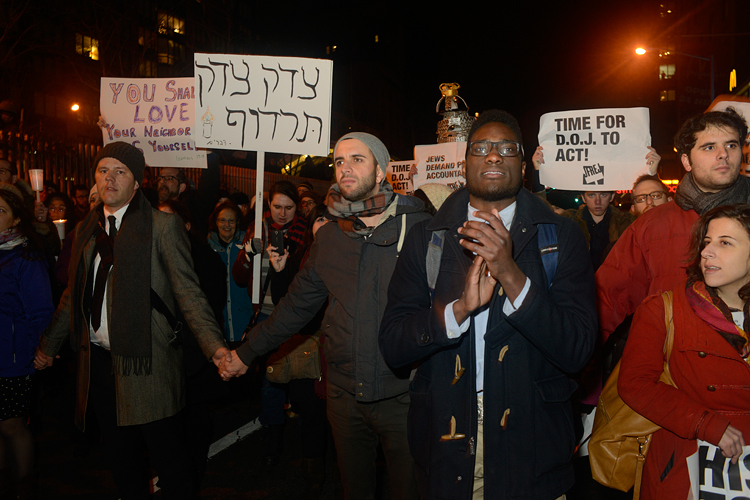 The group Jews for Racial and Economic Justice at one of the marches in New York. Photo: Carolina Kroon

They are also, like an increasing number of activist groups in the United States, teaching a cop watch class, which they developed in partnership with other groups from Communities United for Police Reform, which is organizing to end discriminatory policing and change policing practices in NYC. They call it “Know Your Responsibilities” in contrast with the more common Know Your Rights. It promotes the ideal of ‘radical neighborliness’ by challenging the narrative that discriminatory and broken windows policing makes us safer. It also highlights an unfair treatment by the police towards minority groups. “In New York we are all neighbors, so we have to know that our neighbor’s interest is our interest, and we try to promote that responsibility. Our Know Your Responsibilities class teaches to record the police, in order to protect fellow citizens.” Robin, of the group, told me.

JFREJ is part of a larger group of organizations that helped organize the #ThisStopsToday actions. According to Leo, of the group “The Jewish Progressive voice is important in this movement. Progressive Jews in New York have always been leading voices in activism, and any time people are racially discriminated against there is a reason for us to act.”

JFREJ has over 1000 dues paying members, of which 300 to 400 took to the streets on the 4th. They had just held their annual fundraising ceremony on the Upper West Side, and concluded it by taking to the streets to join the protests. Of the group, 27 were arrested.

I was able to spend several hours talking with the jail support volunteers and many arrestees. One young woman car pooled with her boyfriend and their friend, a medic, before hopping on a train to take them into the city. She was waiting at the police plaza for her boyfriend to get out. She described the situation surrounding her boyfriend’s arrest: They were marching with a group of 100, she estimated, and they had just gotten separated from a larger group. She, her two friends, and her boyfriend were trailing that group of 100 on 54th Street, between Eighth and Ninth Avenue. On Ninth Avenue the group became blocked by the police, but they were further behind, about a half a block. However, when more police rushed in to Ninth Avenue, they arrested her boyfriend without warning; just her boyfriend. “I think it’s because of the way he dresses” the girl told me. “That’s right. When they target you, they gotta arrest you no matter what. You’re an example” a black arrestee concurred.

A white teenager who had been inside also took the time to speak with me. “I was surprised by my cellmate’s intelligence. There were people from NYU, and Columbia. The conversations were real and very supportive.” It is suspected that those arrested under section 5 and 6 would receive an ACD (Adjournment in Contemplation of Dismissal), which basically means that so long as the individual is not arrested again in six months, all charges will be dropped. After being informed of that, he told me what he was really worried about. “I don’t think my parents are going to let me go to the Millions March on the 13th.”

Not everybody was so lucky, however. Those with warrants for their arrest, those arrested on the Manhattan Bridge, and possibly others, were taken to central booking and may be facing more serious charges. 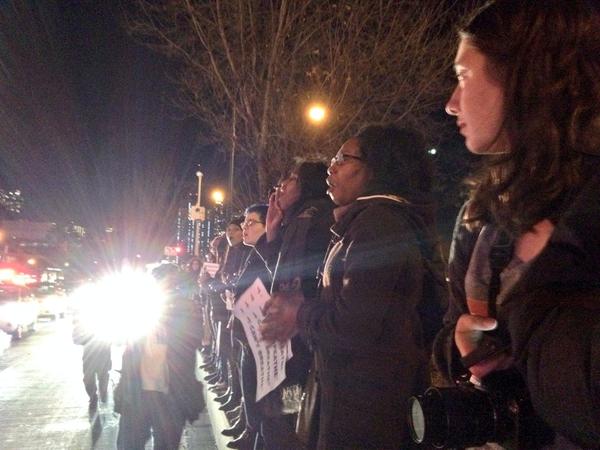 Reports from inside the cell paint a positive picture. All the men were put into one large cell, while women were grouped in smaller cells that hold three to five. Though the benches were uncomfortable, the fluorescent lighting harsh, and the toilets were impossible to use if you were hoping for a little privacy from your cellmates – despite that, arrestees were still chanting, energy and morale were high, and when a new arrestee arrived they would cheer and hug them, and tell the police escorts that the cell was a ‘Pig Free Zone’.

At one point an arrestee, who happened to be a professional comedian, performed a bit for everyone. Several arrestees also told me of an incident inside wherein the police ate pizza outside of the cell’s window in an attempt to mock them. “We cheered ‘No justice, no pizza’”, a take on the popular ‘No justice, no peace’. One person reported seeing two police officers sleeping inside their office; a result of overtime.

I spoke to yet another arrestee. He told me that a group name has been established for communication purposes, and that they already had plans to further organize. I asked him if he thought mass arrests were effective or beneficial in any ways towards the movement. “No,” he told me “they are not an effective form of protest, like direct action. They’re an appeal to a system without a foundation or legitimacy. We try not to get arrested, but sometimes it happens. If we want to progress, the culture has to become more militant and active. People should be taking cues from Ferguson.”

Almost all of the arrestees I interview confirmed a very strong sense of solidarity from inside; they were all in it together – stripped of their technology, and united against the NYPD, all within a context of a social movement that is captivating the world. If not for the anger and resentment protesters have towards the unjust system, these nights of actions could be viewed as somewhat of a victory. The people are more united than ever, and are finally having a lot of conversations that have been taboo in public since we entered into a ‘post-racial society’.

Author's disclaimer – Many of the individuals interviewed for this story were arrested and were advised by lawyers to not discuss their arrests until their court date. Therefore, their names and other facts that could be used to identify them have been left out of this article.