The brainchild of two students who were roommates in Milan, called Orange Fiber, is licensed to make eco-friendly fabrics from scraps of Sicilian oranges. Innovation, respect for the environment and ties to the land are keys to a project that brings ethics to fashion and Italian creativity in the world (Leggi in italiano)

The Made in Italy must be synonymous with innovation, creativity and technology if it is to be credible and exportable not only as an idea but also as a product. Two young Sicilian women from Catania, Adriana Santanocito, 36 and Enrica Arena, 28 have met this great challenge. The two of them are the soul of Orange Fiber, a new eco-sustainable textile, derived from oranges. Thanks to nano-technologies the fabric also has cosmetic qualities, and hydrates the wearer’s skin like a nourishing cream.

But, when did this adventure begin? The two young women were sharing an apartment in Milan where they were both studying, which is so often the case for students coming from the provinces and other Italian regions. In 2011, Adriana was completing her studies at the AfolModa Institute specializing in the field of innovative textile research. While she was conducting work for her thesis she started to think of something that could connect her to her land of origin, Sicily. In particular, she reflected on the huge quantity (700 thousand tons a year) of surplus discharge from the citrus fruit industry. She started thinking about alternative ways to use the fruit in a more productive and sustainable manner. As Enrica recalls, it was Adriana who first came up with the idea, which stemmed from her twin passion for textiles and for Sicily, of producing a textile from what was left over from the citrus fruit industry. Adriana proposed the idea to Enrica and they decided to work together on the project. They founded a start-up and creatively mixed their diverse and complementary areas of expertise, experience and know how: Adriana, an expert on textile and a fashion product manager; Enrica, who studied at the IULM and the Università Cattolica, an expert of communication and marketing. Their start-up was included in the incubator “Trentino Sviluppo”.

Their project is truly extraordinary, thanks to the technology that facilitates the production of new textiles, and has now extended its reach to include operations in Catania, Milan and Rovereto. This is a new industrial triangle that is very different from the one of the economic boom that included the northern Italian cities where hosts of workers from southern Italy found jobs in the factories. Built up and around the Orange Fiber start-up, this triangle is part of a geography of our present and future globalized world; it is also the result of women’s entrepreneurship.

From Catania, their city of origin, to Milan and then Rovereto near Trento, these two young women, without leaving Italy, have succeeded in their entrepreneurial project and have built a concrete job opportunities that link their land of origin to today’s most sophisticated technologies.

In the initial phase of the project, Adriana and Enrica had worked on the feasibility of the orange to textile process with the Milan Politecnico, set up a series of experiments with the Chemistry of Materials Department, availing themselves with a team of highly specialized people. They started looking for financiers and made several applications for support, which brought them their initial funding. Indeed, the first results were so positive that they received awards from Working Capital in Catania, Alimenta2Talent, and the Gaetano Marzotto Award, as well a chance to present their project at the New York Stock Exchange. In 2012, they deposited their patent in Italy, extending it internationally. 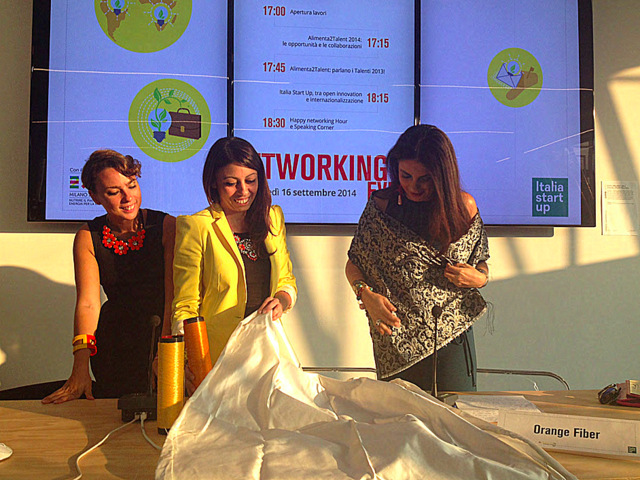 But something else happened that made them think about the possibility of getting involved personally in the production. The new idea came about when they won the Changemaker for Expo prize, an initiative promoted by Telecom for Expo 2015. Changemaker for Expo is supported by the Milanese incubator Make a Cube, which rewards the best socially and environmentally sustainable ideas that could be showcased at the Milan Expo this coming spring.

For the two young Sicilian women entrepreneurs, every stage of the project has been an opportunity to grow. The more they came into contact with professionals who showed them the way to the further development of the production of their textile, the more they refined their idea. Of great help too was the accelerator Working Capital in Catania. They have come closer to their land of origin and are now in contact with a number of Sicilian Transformers of the citrus fruit who have been very enthusiastic of their ideas.

The big moment, however, arrived last year between Christmas and February when some Sicilian entrepreneurs bought a quota of their company. During the Milan Fashion week, on September 16th, 2014, Adriana and Enrica presented the first prototypes of their textiles. One is a satin in a color very similar to its natural hue. During our conversation, Adriana and Enrica told me that they wanted to turn their idea into a fabric that was simple, elegant and clean”; the other is lace, the fabric that for them is the most representative of Sicily, this time in two contrasting colors, black and neutral. Their wish is to create a collection with printed textiles of different typologies of thickness and weft and of such variety that they can be sold in time for the February 2015 shows. Their dream is to be able to produce a bigger variety of textiles that respond to the criteria of sustainability, but also contribute to the healthy being of the body and mind of their customers. For my part, I hope that, come the New Year, we will be able to write about a new fashion collection created with Orange Fiber and on display at the 2015 Milan Expo. And it is with this good wish to Adriana and Enrica for a creative project that matches the color of a Sicilian sun that we say good-bye until January. Keeping the dream alive.