You cannot rewrite the past, but you can reinterpret it, and through the images of the past we can stop and create new trajectories in the present. In the history of women photographers the material culture, brings to the fore new presences. I would like to talk about one of these, Alice Elizabeth Austen whose house on Staten Island is now a museum (Leggi in italiano)

You can’t rewrite the past. We have heard this sentence many times.  It sounds like an invitation to go forwards and not get stuck in a not so pleasurable past, in missing gestures, in traumatic or tragic experiences. Or, it’s an invitation to overcome situations or words that could have been avoided. Not being stuck in the past means being able to write new pages of the present and of the future. But what does the idea of the impossibility of rewriting the past really mean? Does this impossibility, or choice of non-action, give us the gift of freedom to live and shape our present and future in a more creative manner?

To be sure, you cannot rewrite the past, but you can reinterpret it.  This process of re-interpretation resides, in fact, in one of the most creative forms of writing. But this also coincides with the freedom-endowing act of delving into forgotten and dusty places. So, this is not so much a question of finding new material and data, always possible in an epoch like ours that is so obsessed with datology. Rather, the act of revisiting and reinterpreting becomes crucial to the way in which we understand that which perhaps was under our eyes and to which we have never given any value. One rethinks, re-lives, re-interprets the past in the context of historical, cognitive structures and processes that continually evolve and change. The traces of the past come back to us to form new constellations and trajectories of the present.

We find, say, an object, an old photograph or a discarded garment that connects us to a person or situations that we revisit and perhaps offer us the opportunity to know something or someone that completely escaped us.  Here a detail that was hidden in a smile; or in the fold of a shirt. And yet, this detail represents a healthy interruption in our hasty existences; it is from there that a new path can open up for us. To interrupt means to stop for a moment. It is a gesture that gives back meaning and weight to its opposite, movement and flux. Photography, cinema and that which is made available by today’s digital revolution are the materialization of our being in the world. To go, to stop and to go again and then ad infinitum. 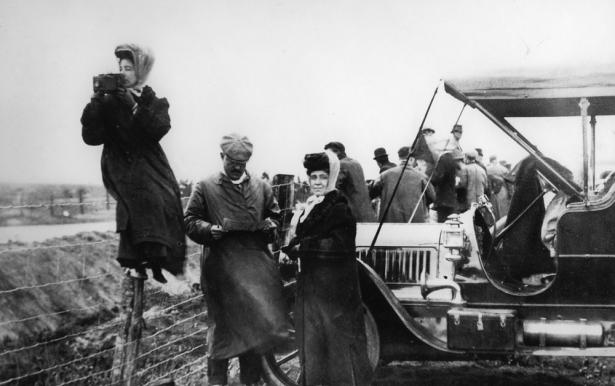 Less concerned with decorum than with getting a good picture of the auto speed trials, Alice perches on a fencepost. Photo: Alice Austen House

In the history of women photographers, images, material culture, fashion, objects bring to the fore new configurations and above all new presences. Today, I would like to talk about one of these, Alice Elizabeth Austen (1866-1952), an extraordinary photographer and artist who lived in a house (Clear Comfort) built in the 1600s in Staten Island, one of NY’s boroughs.

Her former residence is now a museum thanks to the battles of conscientious citizens who in 1960 reclaimed the house, the park and beautiful garden on which a complex of apartment buildings was about to be built. These courageous Staten Island citizens saved the house and Alice’s world that is now a place on the map for New York visitors who are not fulfilled, and rightly so, by the usual Manhattan touristic charm. But Alice’s House is also a place visited by young people, teachers and students; and during the summer camps are held there.

Due to health and financial hardship in the last few years of her life, Alice was forced to leave her beloved home, which she shared first with her grandfather and mother and later with her life companion Gertrude Tate. She had lost most of her money during the Wall Street Crash of 1929.

Alice discovered photography when she was ten thanks to her uncle Oswald Müller, a Navy captain who brought the photographic apparatus to her home during a visit. Alice was absolutely fascinated by this new science and technology and when the uncle left it behind him, Alice’s destiny was already marked. She would never be far from a camera; photography would become her way of understanding reality as well as expressing her creativity and giving form to her curiosity about the world, people and herself. In her photographs, we see her in many different circumstances, poses and dresses. You can see her attention to detail, to clothing and the fashion of the time. As well as being the author of photographs Alice also enjoyed being their subjects. 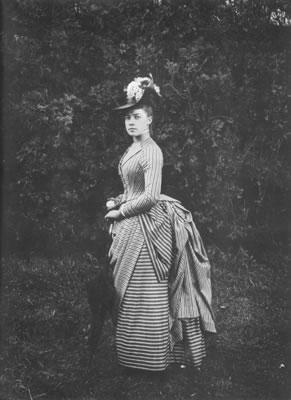 One photograph, a portrait of Alice when she was twenty-two taken by her uncle Oswald Müller, in June 1888, is particularly beautiful. He body is defined by the shape of her dress and corset. The game of vertical and horizontal stripes and her direct gaze into the camera suggest a strong and unconventional personality. In her right hand, she seems to be holding a tennis ball, the sport in which she excelled. Attentive as he was to the smallest detail, Roland Barthes would have called this the punctum in Alice’s portrait. Why does she have a tennis ball in one hand, and an umbrella, an accessory that completed the outfit of a lady, in the other? Whose idea was this combination of sport and femininity? Alice’s or the photographer’s?

Alice left more that 8,000 photographs. They are now held at the Staten Island Historical Society and some of them are on view on the Society’s website. In some of these pictures, we see Alice, Gertrude Tate and other friends.  We can see how Alice uses dress as a mode of performance. Photography represents for her an opportunity, an identity that is open to play. This mise-en-scene is captured along with the portrait. Then in other examples, we see the changes in the female body and in public appearance with the appearance of the bicycle, which revolutionized behavior and life styles and brought a new dynamism to the everyday.  Alice herself was an avid biker and later owned a car so she could travel to take pictures in a city that was gradually being transformed into a megalopolis. It was not easy to transport heavy photographic equipment while she was going out to photograph. And with such encumbering and constricting clothing!

Alice, however, never gave up on depicting life in the streets. Her  subjects are many and different, from the immigrants who arrived to populate and bring new energy to the city, to the children who sold newspapers or the fruit and vegetable sellers in Lower Manhattan markets. Alice is the author of this wonderland and she invites us to take a leap with her through the looking glass.