During the 30s, second-generation Italian-American Nina Piscopo D'Amore designed a collection of house-robes as her graduating project. Her design combined elegance and comfort by defining a style that was to become the distinguishing mark of the Made in Italy. (Leggi in italiano).

While I was reordering material in my research files I came across a piece I wrote a few years ago on Nina Piscopo D’Amore (1917-1994), a second-generation Italian American who designed a collection of house-robes as her graduating project entitled The Art of Lounging (1939).  The collection is composed of 11 fashion plates with descriptions and fabric samples for each design and an essay that accompanies the designs. It was such a pleasure to dig again into Nina Piscopo’s work. Although my essay is still unpublished I wanted to share and resurrect my dormant text here. 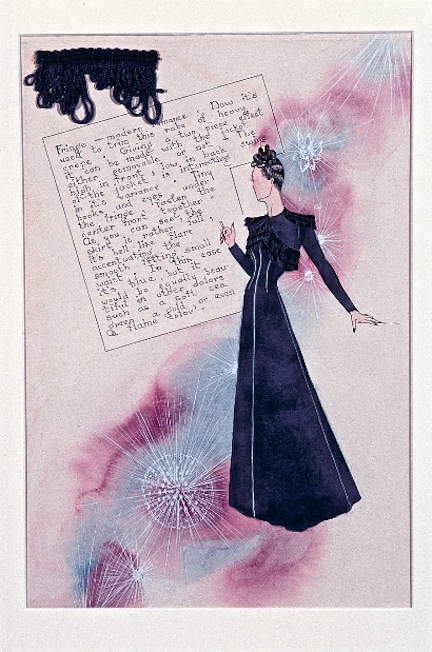 Piscopo grew up in the Boston area. She graduated from the Massachusetts School of Art, having made the most of a rare opportunity for Italian immigrants and even their children, especially women, in the late 1930s. Nina lived a remarkable life as a mother of four children, a social worker who worked to resettle refugees with the International Institute of Boston. She was also an Italian translator in the Boston Courts and a social activist.

Dress, as is clearly seen in Nina’s The Art of Lounging, is an embodied experience within space—that of American society in the late 1930s—and place– the home. For Nina, space and place are never divorced from social practice. Her work can be best understood in the context of her family and the history its components have preserved through not only photographs and objects, but even the swatches of fabric left over from dressmaking.  A powerful female line is maintained, reinscribed in the present and exhibited in a multifaceted language that is visual, material and verbal, working across time and space and bringing America and Italy into a constant dialogue. 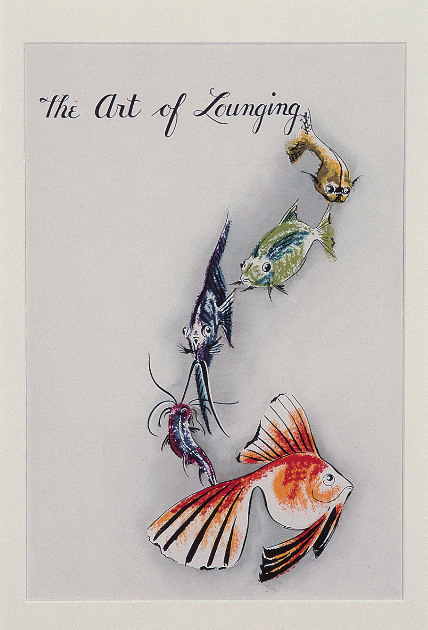 I first came across Nina Piscopo’s life through the exhibitions and book An Italian American Odyssey: Life Line – filo della vita, Through Ellis Island and Beyond by the artist and writer B. Amore who is Nina’s daughter.  Indeed, B. Amore, in one of her most compelling installations, puts at center stage a bedspread beautifully woven by her great grandmother to symbolize the ocean. On top of it, irons and pick-axes stand to simulate both the boats that were taking hundreds of Italians to the promised-land and and the domestic work done by women.

The motifs of fish appear in Nina’s collection, almost to symbolize the fluidity of the sea, and bring with them the mobility of the present and the memory of the past. In this way the work of women is here in constant dialogue with a past in which their role has always been that of the custodians of memory and family legacy, rituals and traditions.

In her  The Art of Lounging we see how the art of dressing was connected with self-fashioning and highlighted a cultural heritage and the discovery of her own fashion sense. The word thread and its image are crucial in telling the story of Nina’s work and her link with past and future generations of women and family members. She reaches back to her mother, Concettina, for whom as B. Amore reports “sewing was not only a livelihood, it was a way of life, her own particular Tao. When she sat sewing, the world was completely composed.” 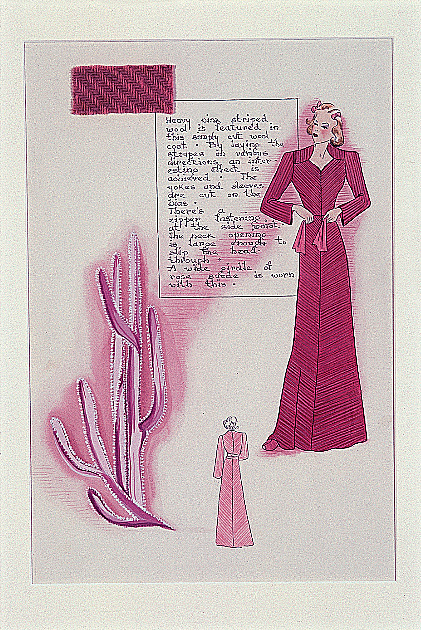 For Concettina and for many other women of her generation sewing was an act of creativity, a form of agency and identity. In fact, many Italian immigrants, although of very modest origins, went out of their way to wear their Sunday best and take care of their appearance at certain ritual moments in family life. For Italian immigrants, as we can see when they appear in family photographs, dressing neatly and well gave a sense of pride and an interruption of their daily routine and clothing. Most of the time, women in the family were able to make Sunday-best clothes themselves and so made sure the different members of the family could appear at their best. In their mind, this was also a way of keeping alive their Italian cultural heritage. In this way, Nina’s designs bear the mark of an intricate and rich cultural heritage and sensibility.

Her designs are a variety of “hostess robes.” Their cut bears a similarity to a shorter and much more casual version of the same kind of garment that resembles the shirt-dress. Nina’s designs, in fact, while recalling the versatility of the shirt dress are much more elegant and sophisticated.

Interestingly, the shirt-dress in  much more casual version can be considered a staple in women’s wardrobes and it has, in the last few years, regained popularity. More recently, in fact, the shirt-dress has been popularized by Diane Von Furstengerg. In her collection, however, Nina dresses up the shirt-dress giving it a hint of glamour and making of it something special that recalls the 1930s Hollywood films.

How and to what extent did Nina’s cultural background have an impact on her design and aesthetics? Certainly in her “Art of Lounging” she combines elegance and ease, two factors that will later on characterize Italian fashion, especially in the Anglo-American market. It will, in fact, be this combination of elegance and ease, a sartorial kind of “sprezzatura,” that was to become the distinguishing mark of the Made in Italy when it was launched on the world stage in the 1950s, and that signaled its difference, distance and independence from French fashion.

My special thank you to B. Amore and the wonderful conversations we had a few years ago.