While in New York Samuel “Roxy” Rothafel was transforming a conventional space into a formidable experience, an exceptional building was being exploited to create a strictly classical concert hall in Rome. The fascinating stories of Radio City Music Hall and the Teatro Augusteo intersect.

John D. Rockefeller Jr.dreamt of building, within his very own Rockefeller Center, nothing less than the Metropolitan Opera of the city. Despite many attempts, he saw this opportunity fade away throughout his career, and nonetheless returned without losing his spirit and launched an even more exciting proposal that involved some of the biggest American personalities of the ‘30s.

He thus turned to the paramount Samuel “Roxy” Rothafel, the biggest theatre manager around at the time, and commissioned him to imagine something that was completely new to their times; and this didn’t simply mean a new building but a brand new theatre concept, but “ the most complete technical structure of the world with a revolving stage, an electronic curtain, 75 shot sets, a 36 meter cyclorama, sound amplification, tailors’ quarters, dancers’ dormitories, rehearsal rooms, a small hospital, and even a tank and fountain to be used on stage- all in front of an audience of 6,000 uninterrupted seats”. 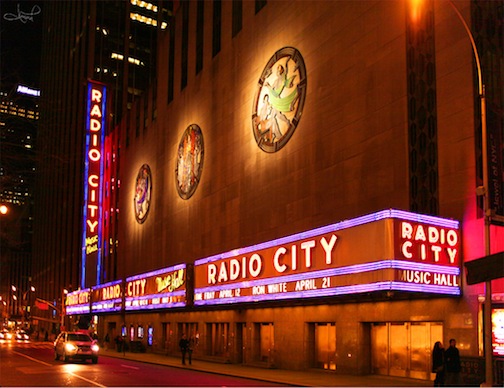 All of this surprised the carefully selected invites to the inauguration of the theatre on December 27th of 1932 when the curtain opened for the first time in the Radio City Music Hall. The Associated Architects team, responsible for not only the theatre but the entire Rockefeller Center, had to reconcile the visionary demands of Roxy with the elegant Art Deco style of the project. Roxy in fact demanded and obtained, with the support of Rockefeller, that the architecture of the main hall would dazzle the public, helping them to make this place “the greatest theatrical adventure in the world”.

And so, within the rigid walls of the music hall, there radiates a series of concentric semicircles made of stucco from the center of the big stage which, that to a curtain made of special reflective fabric and lighting effects, reproducing an artificial sunrise at each interval or at the end of every show. Through the desire to surprise his own spectators, Roxy goes so far as to provoke artificial amazement, not only with the architecture but with the use of chemistry, experimenting with ozone in the ventilation system to induce a sensation of lighter in the audience. Very quickly his lawyers convinced him to cease that strategy, advising him of the risks that it could entail. It was not only a theatre, but a revolutionary experience that proved to be so futuristic that it was incompatible with the shows of the time: the use of technology and the characteristics of the building distracted viewers from the simple shows that were not yet sufficiently revolutionary and so, inevitable, launched a quest to produce a new genre of spectacle that could compete with the splendor of the venue.

To prepare the design for the Radio City Music Hall, the Associated Architects decided to embark on a journey through Europe in order to visit the most important theatres in the world in 1931. They even convinced the unenthusiastic Roxy to join them; he desired to create something new which one could not imagine to find in Europe, however during this trip he found himself admiring a theatre that, though very different from what he had in mind, reflected his idea of singularity.

In fact, in Rome at that time, if one wanted to listen to a concert from the famous Accademia di Santa Cecilia, one would go to a building that was not at all futuristic but rather over two thousand years old: a mausoleum built by the Emperor Augustus who died in 14 AD, the same one that today, though in a state of semi-abandonment, occupies the center of the square. No gimmicks, nothing revolutionary but simply a wooden stage surrounded by circular grandstands for the audience, with exceptional acoustics and built in the tradition of the Italian Theatre. Its uniqueness was found in the “container”- with a concept opposite to what was being built in New York- and the innate architectural capacity of the Eternal City to adapt the old, contaminate it and create something completely new. 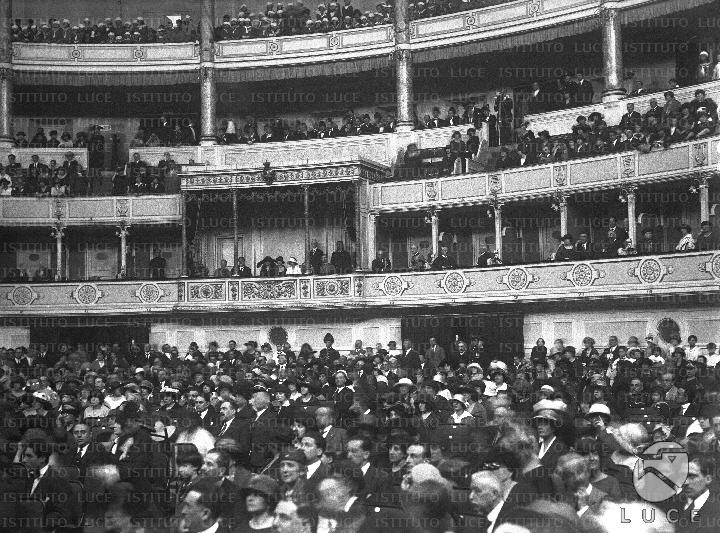 While Roxy was transforming a conventional place into a formidable experience, in Rome, and exceptional building of great importance and significant history was well-designed to get the most classical concert experience. Nonetheless, even the history of the Teatro Augusteo is fascinating- perhaps even more so- than the “Hall” of Manhattan. The ancient theatre in fact, after the classical era, came into possession of the Soderini family who built a “secret garden” inside and, in the 18th century, it was acquired by a cardinal of Portuguese origin Vincenzo Correa Hands (which in Roman dialect became “Korea”), it was transformed into a circular arena equipped with bleachers destined for horse shows and fireworks, with a total capacity of two thousand spectators. These kinds of shows became quite popular to the point where, in 1826, Valadier designed a curtain built to protect spectators from bad weather that unfortunately collapsed shortly after its completion resulting in the death of one spectator and the condemnation of the famous architect. 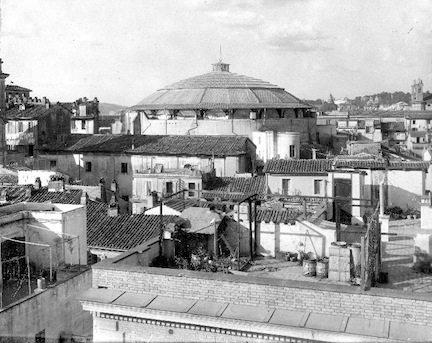 And so we arrive, after many transformations, to 1908 where it is decided to use the space to host performances of the prestigious Accademia di Santa Cecilia, the arena thus becoming a formal audience, with a new seating area in an enclosed space (this time in a permanent way) thus leading to the 16th of February of that year where it was inaugurated as the “new” Augustan Theatre. Those who have been can recall it as a concert hall with extraordinary characteristics, boasting impeccable acoustics through its proportions and located in a unique place in the world. Unfortunately the theatre has a very short life: not even thirty years later, in 1937, the fascist regime led by Mussolini ordered that all new structures be demolished including those of homes that had been erected so close to the theatre walls, with the aim of isolating the building and celebrating the glory of Ancient Rome through the imperial mausoleum: in Vittorio Ballio Morpurgo’s project, the monument was visible in the centre of a new “piazza” nearby a theca for the Ara Pacis. Today the mausoleum of Augustus is in a semi-abandoned and forgotten state, in the middle of a square that should be transformed through an ambitious project that is repeatedly postponed for the last ten years.