For the 50th anniversary of the Selma "Bloody Sunday" march and beating, President Obama delivered a speech in the Alabama town, urging Congress to restore Section 4 of the Voting Rights Act and a new generation of marchers to carry the torch. Obama does not mention the failed policies and loose laws in the United States that hurt African American communities today. (In italiano).

But back in June of 2013 the Supreme Court overturned a key section of the Voting Rights Act which barred repeat offender states and jurisdictions with a history of discrimination from changing voting rules without federal permission. What followed was tragic. States scrambled to pass new voter restrictions including lessening allowed voting hours, destroying voter rolls, banning same-day registrations, and new voter identification laws.

In his Saturday’s speech president Obama alluded to this, saying “Right now, in 2015, fifty years after Selma, there are laws across this country designed to make it harder for people to vote” and “One hundred Members of Congress have come here today to honor people who were willing to die for the rights it [The Voting Rights Act] protects. If we want to honor this day, let these hundred go back to Washington, and gather four hundred more, and together, pledge to make it their mission to restore the law this year.”

The president also made the case for progress, saying “If you think nothing’s changed in the past fifty years, ask somebody who lived through the Selma or Chicago or L.A. of the Fifties.” Ironically, the entire speech was delivered in front of the Edmund Pettus Bridge, a pivotal point in the Bloody Sunday march, named after a top leader in the Ku Klux Klan. There is, however, an ongoing petition to change the bridge’s name.

Some things were noticeably missing from the President’s speech. He called for an increase in voter participation, for fairer sentencing and less crowded prisons, and a renewed fight for voting rights. Yet he did not acknowledge there are 5.85 million American citizens barred from voting due to their criminal records, which the ACLU has mapped.

He even lamented the early deaths of colored men. But just one day prior, yet another unarmed black teenager, Anthony Robinson, was killed by police in Madison Wisconsin, sparking protests. The president opted not to attribute blame for these deaths or give names to the victims. He called for better relationships between police departments and their communities. He said, “Citizens in Ferguson, New York, and Cleveland, they just want the same thing young people here marched for 50 years ago, the protection of the law.” But, as the protests have been a reaction to police violence, it would be far more accurate to say that these citizens are seeking protection from the law.

While the president’s rhetoric was impassioned and powerful he neglected to mention the failed policies that ail the black and other minority communities, nor did he make note of racial bias and its role in the nation’s most striking racial disparities. He made no mention of the Bureau of Justice Statistics March 3rd analysis that over half of all deaths resulting from police shootings are not counted by the FBI, whose numbers have drastically shaped reporting following the death of Micheal Brown, that sparked protests in Ferguson last summer.

The president went as far as to say that the report was reminiscent of the “disregard for citizens that spawned the civil rights movement.” But, when comparing Ferguson today to Selma 50 years ago, he said that discriminatory practices are “no longer sanctioned by law, or by custom.” In every step of the process by which citizens are incarcerated, African Americans are more likely to be stopped by police, searched, arrested, issued tickets and fines to, convicted, and jailed. Due to racial bias in revenue driven policing, prosecutors often treat black defendants more harshly, juries are more likely to convict them, and police are more likely to target them. Despite the president’s carefully worded remarks, this is the custom in the United States. 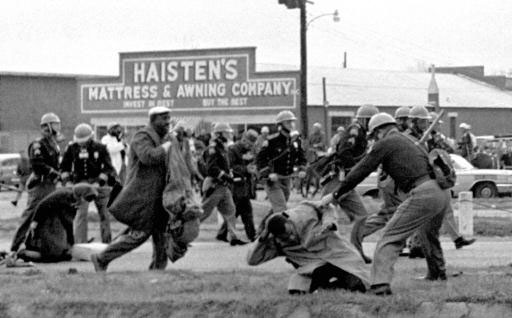 Never was this policy problem more evident than in New York City last January during the NYPD’s work stoppage. The Patrolmen’s Benevolent Association, a leading police union, urged officers not to make arrests unless “absolutely necessary”. Arrests dropped by 66 percent, leading many New Yorkers to question if the NYPD was making unnecessary arrests in the first place, and who were the victims?

Just recently, NYC police commissioner Bill Bratton advocated increasing the penalty for resisting arrest from a misdemeanor to a felony. The charge is often criticized for being used as a pretext for excessive force, and while John Lewis and Barack Obama advocate for peaceful protest, those beaten in Selma all those years ago were in fact resisting arrest themselves.

Back in the era of local and state racial segregation laws in the south, known as Jim Crow, African Americans were explicitly discriminated against, but today it’s better hidden. Thus, any discussion of moving forward should focus on identifying weak policies and amending them. The Department of Justice knows this, and that’s why they’ve been moving towards reforms like body cameras and of civil asset forfeiture.

Yet, even these moves have been criticized as ineffective. While body cameras generally result in a reduction in both use-of-force incidents and complaints against officers, some cops have already been caught turning off their body cameras before using excessive force.

Barack Obama has no intention of getting into the specifics of customs and policies that result in the persistence of racial discrimination in the US and his speech was deliberate in choosing the themes and terms.

He did not condemn even the most brutal acts by law enforcement today but was unhesitant to speak of the brutalities of Bloody Sunday 50 years ago. It is far more politically effective for any president, of any race, to emphasize and rally behind the issues of the past instead of focusing the issues of today, namely, nuances in policies that allow for mass racial disparity across the country. For the president, it is better to align with a good history than with a contentious present.