When you hear talk of Italian art, you think almost exclusively of art from the past. Today, we go to instead find the new face of Italian art- modern art in New York City.

While Art is one sector in which Italy is very well known, in the United States it is mostly Renaissance art that is appreciated. However, today more Italians are trying to promote appreciation for contemporary and modern art made in Italy.

What purpose does contemporary art have?

Within the experimental project Business Italian Style, which involved students from the Italian Program at Montclair State University, our group interviewed Laura Mattioli, founder of the Center for Italian Modern Art (CIMA) and Cecilia Alemani, director of the High Line Art program in New York City; two different people who described to us how Italian contemporary art is perceived overseas and how this sector may be developed in the future. From our interviews and our research, we have concluded that there is a strong cultural tie between the United States and Italy.

Italy has the largest cultural heritage in the world; with 50 UNESCO sites, the largest number of World Heritage Convention protected sites, and more than 3,400 museums and 2,000 archeological sites, the “Bel Paese” has undoubtedly earned this title.

And yet, different studies point out that the revenues coming from the Italian cultural heritage – generated by tourism as well as art sales – are not at the level of countries with a smaller heritage than Italy’s. One study, although a bit dated but still valid, states that the cultural and tourist sector represents 13% of the Italian GDP, against Spain’s 21%, for example.  The same study also showed that art exports from Italy in 2006 only reached 130 million euros, compared to 3.2 billion euro worth of exports from the United Kingdom and the 900 million from France.

This is data that makes you reflect on Italy’s ability to capitalize on its heritage. In particular, it appears that little appreciated is contemporary art, also still not well known abroad, with the exception of artistic movements like Arte Povera (poor art), which reached its peak of notoriety with Christies’ auction Eyes Wide Open: An Italian Vision in February 2014, which had a total profit of 38,427,300 pounds. In New York, the works of Alberto Burri, one of the most famous artists in the Arte Povera movement, will be displayed at the Guggenheim in the fall of 2015, while two shows related to that artistic period will be on display until mid-March.

If art is also business and can represent an interesting opportunity for economic growth for Italy, it is then important to understand why Italy is absent when we talk about contemporary art, while the “Bel Paese” is universally appreciated for art of the past. Many art traders in Italy lament the lack of resources and institutional support. Both Cecilia Alemani and Laura Mattioli underlined this issue during our interviews.

The Home of Italian Art – CIMA 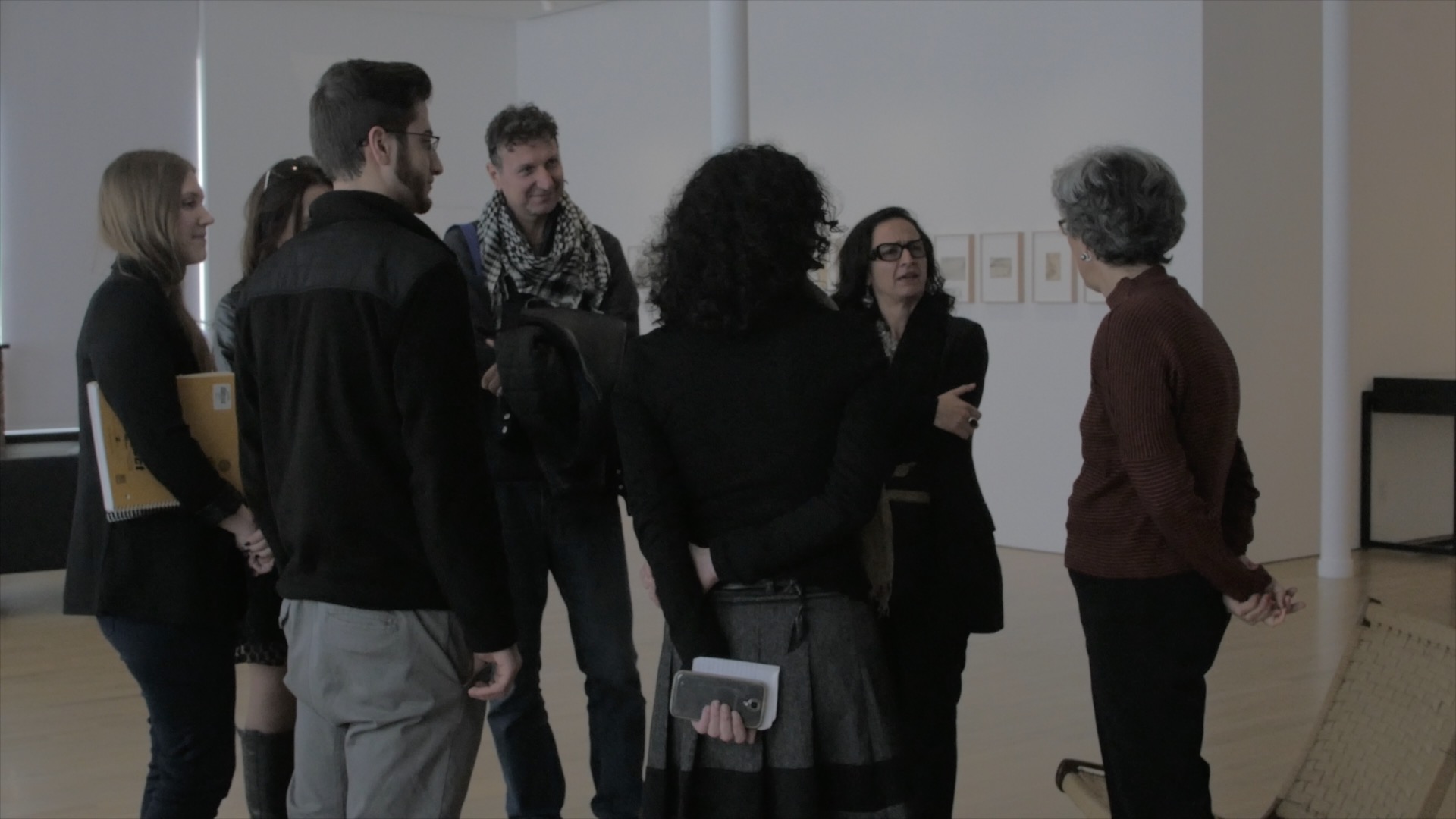 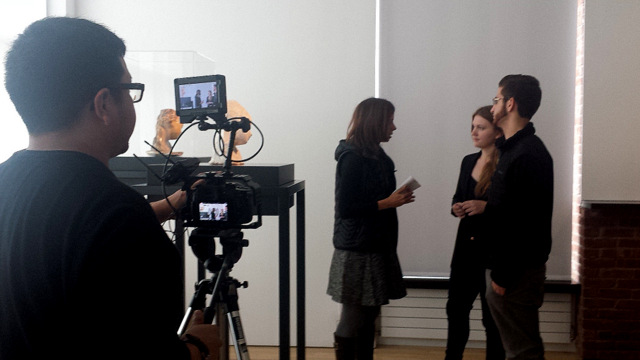 Chiara Fabi, one of the CIMA visiting scholars, walks the students through an in-depth tour of the Medardo Rosso exhibit┬á

Laura Mattioli founded CIMA with the goal of promoting the study of modern and contemporary Italian art and spreading public awareness and appreciation about it in the United States. CIMA was born in SoHo in New York City in 2013 as an exhibition space but above all as a center for the study of the arts. With exhibits dedicated to a different artist every year (last year the work of Fortunato Depero was shown, and from Fall 2014 to June 2015 the works of Medardo Rosso will be on display), CIMA offers the opportunity for visual arts students to expand their knowledge of modern art thanks to scholarships for stays in New York and immerse themselves in the work of the artist featured that year. These students are mostly PhDs  in Art History who, while working on their research, also act as guides for the exhibits. (Visits at CIMA are by reservation only in order to guarantee an experience that is different than that of a traditional museum or gallery). When we went to visit CIMA, the two recipients for that semester were Chiara Fabi and Francesco Guzzetti, who gave us a fascinating tour of the sculptures, drawings, and photographs by Medardo Rosso.

“The scholarship recipients,” explained Laura Mattioli, “can be young adults coming from all over the world who work together on site to study the artists through different methodologies and points of view. Therefore, we try to exhibit artists who offer an interdisciplinary approach. Here, the works are presented as a “jumping off point” for new ideas, a more liberal and creative approach, almost impertinent.”

CIMA has a family history behind it. Laura Mattioli is the daughter of art collector Gianni Mattioli, who collected the bulk of the works during the first half of the 20th century. He began his collection as a response against the violence of World War II, since he was convinced that art could make humankind less beast-like, as his daughter told us  in our video interview (above). Laura’s commitment to art came from that first collection, as well as her desire to spread knowledge of modern Italian artists past national borders. 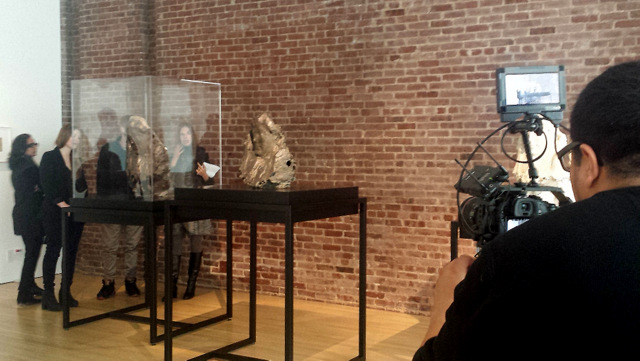 CIMA was conceived as a meeting place; a “home,” as Laura Mattioli put it, to share Italian art.  “This place looks more like a home than as a museum; a home for works of art that, for a large part of the last century had this domestic dimension because they belonged to a private collection. Above all, the idea is to offer a more calm, direct, and personal space of fruition for the works that would be more rigid in a traditional institution.”

The objective is to speak to Americans but also to those Italians who know little of their own art. “I would like it to be an open institution, a meeting place for everyone with a wide-ranging educational purpose. It is also important for the Italian American community to rediscover their own cultural roots.” In this mission, training in the Italian language and culture is useful, but one must also have a view that is open to the world: “We should have a relationship with American society. Equality between backgrounds gives vitality to this country and, if we want to share something, we must share it with Italians and Italian-Americans as well as with everyone else,” says Laura Mattioli.

If CIMA is the home of Italian art, there is a space in New York where the person who chooses the art is Italian, while the artists who manage to reach this important space are placed into a decidedly international environment. This is the High Line, the famous park reconstructed from the elevated railroad on the West Side of Manhattan, for which Cecilia Alemani curates the art program that began in 2009. Her program presents a large variety of works of art and includes exhibits, shows, and video projections. 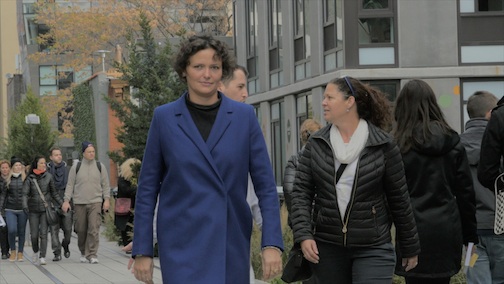 Cecilia Alemani meets the students on the High Line 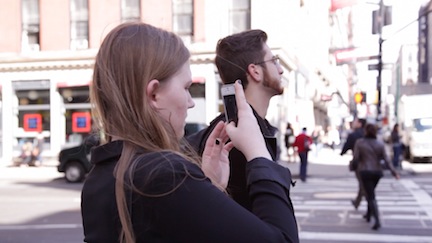 Before the interview, students stop to take a picture of the High Line from the street

Born in Milan where she studied philosophy, Cecilia Alemani moved to Paris, but it is in London that her passion for contemporary art was born. In 2003 she moved to New York for a Master’s degree in Curatorial Studies for contemporary art and in the Big Apple she began to organize various arts-related events and shows. We met with the curator in one of the most scenic areas of the High Line and she told us, “America has a culture that rewards those who are brave or persevering, while Italy is still embroiled in a different culture.”

According to Cecilia Alemani, America sees art as a good and a trade, the opposite of Italy, which sees art as cultural advancement. And while America is the main country in the world in terms of  supporting the contemporary artistic scene, Italian museums do not have funding and are falling behind. “Regardless of how interesting Italian contemporary art is, Italy is missing a structure and a system comparable to the U.S.’. Museums are in a desperate situation; there are very few non-profit foundations; and there are no alternative spaces where artists can work and show their creations outside of commercial galleries. Because of this, an artist who decides to stay in Italy has less opportunities to grow and gain respect compared to an artist who chooses to travel abroad.”

A confirmation that we found in the High Line program: “We had three Italian artists, Paola Pivi, Maurizio Cattelan, and Alessandro Pessoli, and strangely, or maybe not, they are all Italian artists who do not live in Italy,” as Cecilia told us. 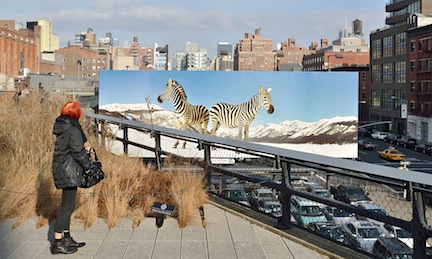 As director of the High Line program, Cecilia Alemani’s job consists of selecting artists whose work is displayed on the elevated railroad tracks. She searches for talent in New York and in the rest of the world; she travels often, visits international biennials, meets with potential artists, and commissions pieces to be created for the High Line. Her outlook is an international one: “I don’t believe in “Italianness” in art. Art is a doctrine and a universal language in which the national labels do not work anymore. In fact, very few Italian artists speak of Italy in their work because it is no longer a source of inspiration.” 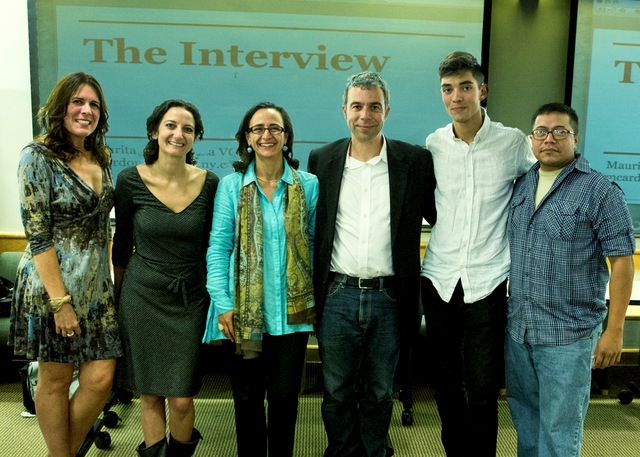 This is one of the four-episodes series Business Italian Style, a project by The Inserra Chair in Italian and Italian American Studies(Italian Program at Montclair State University), La VOCE di New York, and ArtMotion, developed within the Business Italian class (ITAL321) taught by Enza Antenos, and a Cooperative Education class (ITAL385) taught by Teresa Fiore. Each of the four parts focuses on a different Made-in-Italy sector encompassing Design, Art, Fashion, and Food. The interviews were designed by the Business Italian students, while the filming and editing was done by Omar Portilla and Jarrett Strenner.

Second part: Made in Italy? A Question of Style.

Translated from the original Italian by Emilia D’Albero.