The Vito Marcantonio Forum presented "East Harlem Remembered" the new book by historian Christopher Bell a journey down memory lane about the history of a rapidly changing neighborhood. (In italiano).

Anyone tooling social media channels lately cannot help but notice long discussions on Italian American sites of people falling in and out of love with the PBS series The Italian Americans that has been airing on public TV.

One viewer noted, “Once again a golden opportunity was missed – with the investment of something like four million dollars, and they still did not get it right,” meaning that the narrative is, with few exceptions, the played out cliché of rags to riches patriots rather than reflecting the melting pot of immigrants who landed on these shores: from anarchists to labor activists, feminists and conservatives, fascists and numerous Italian American progressives.

So the timing could not have been better for another event from the Vito Marcantonio Forum (VMF) this time celebrating Black History Month featuring historian and East Harlemite Christopher Bell who presented excerpts and slides from his latest and third book East Harlem Remembered (McFarland & Company, Inc., Publishers). The event took place Saturday, Feb. 28 at the Mulberry St. Branch of the New York Public Library at 10 Jersey Street in New York City. 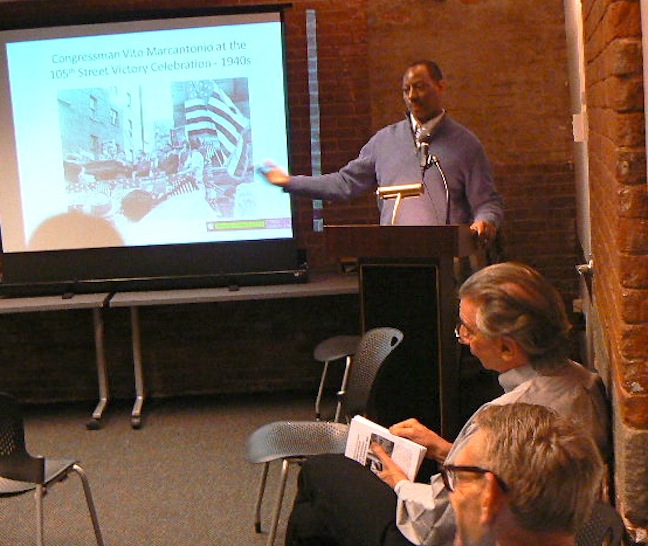 An East Harlem native, Bell has arrived at a crucial moment in East Harlem’s history as gentrification has accelerated through this neighborhood. Through his work, he has preserved a rich segment of ethnic diversity in New York City through a series of in-depth oral histories among characters alive and past, telling their stories. The book reflects the cohesiveness of this fabled neighborhood that formed a unified and progressive electoral block for decades.

Closely associated with Italian, Jewish, German and Irish immigrants, East Harlem’s the African American community has often vanished from the narrative because as Bell said, it is assumed all Blacks lived exclusively in Central or West Harlem.

As has become a tradition at VMF events, poet, translator and independent scholar, Gil Fagiani kicked off the afternoon with a reading of his poem Litany of San Vito printed on what appear to be holy cards or "santini" as they say in Italian. 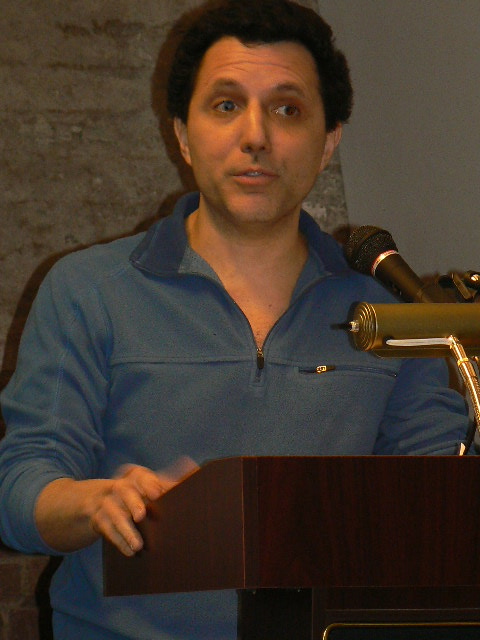 Bell’s presentation described the multi-ethnicity of the Black people who arrived from all over the world – from the Caribbean to the deep South — and settled in Harlem. He brought the audience face to face with an intimate view of daily life in East Harlem when three and four-story tenements lined the streets filled with immigrants of over 35 ethnicities speaking some 27 languages. During the 1930s, there were literally hundreds of small single-owner grocery, candy stores, doctors, tailors, shops, funeral parlors that provided a vibrant local economy.

Bell mentioned how people would climb on to their fire escapes to watch the hotly contested stickball games below on East 100th Street.

With the post-World War II era, politicians advocated for public housing which provided decent housing, but as Bell pointed out, meant the destruction of the tenement row-houses, many of which had been built in the early 1900s tearing the cohesiveness of the neighborhood. 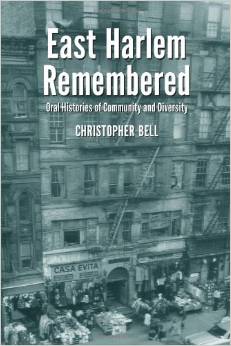 At the same time, Bell drew the strong links between the country’s most electorally successful progressive politician, Congressman Vito Marcantonio, and his efforts to promote Civil Rights legislation, to destroy the poll tax, which prevented both the poor and Blacks from voting in southern states, and in the pre-Jackie-Robinson era, advocated fo African Americans to be included in major league baseball.

During WWII, Marcantonio worked with William Patterson and Benjamin Davis, Jr. in forcing the Red Cross to integrate the blood banks. At that time, he succeeded in bringing about the passage of the Fair Employment Practices Commission that outlawed discrimination based on race, religion, and nationality. Like other VMF gatherings, the event attracted activists, historians, workers, writers, culture workers and New Yorkers profoundly conscious of the city’s history, eager to set the record straight regarding progressive political history while acutely aware of the perils of gentrification sweeping the upper reaches of Manhattan today that threatens to wipe out its glorious history.

The VMF is a historical, cultural, and educational organization that brings together people from a wide variety of backgrounds, dedicated to disseminating and sharing knowledge of the life and work of Vito Marcantonio (1902-1954). “Marc,” as he was affectionately called, ran on the American Labor Party line, and was the most electorally successful progressive politician in U.S. history having served as the congressman from East Harlem for 14 years (1932-1950).

For more information, you can visit the web page of the Forum. The next VMF event will celebrate Labor History Month on Monday, May 4th, from 5:00 to 7:00 PM at the Mulberry Street branch of the New York Public Library.

Gerald Meyer, author of Vito Marcantonio: Radical Politician, 1902-1954, will focus on the American Labor Party (ALP) that ran candidates in New York elections from 1936 until 1954, which tremendously influenced State and City politics toward a progressive agenda. Both Fiorello LaGuardia and Vito Marcantonio ran on the ALP ticket. In 1944, Franklin Delano Roosevelt garnered almost one-half million votes on the ALP line. The ALP attracted support from the City's minorities and had a large following among Italian Americans.

A cultural program will follow featuring Roberto Ragone and LuLuLoLo Pascale. The VMF hopes this program and its other activities will inspire progressives to revisit the lessons of the American Labor Party for our own times.

*Maria Lisella is vice president of the Vito Marcantonio Forum. Her work appears in major travel publications. She co-curates the Italian American Writers Association; Her latest book, "Thieves in the Family" was published by NYQ Books.