Ranging from Judaica to a plastic and extreme modernity, the three exhibits at the Jewish Museum of New York until August 9th play with the concepts of uniqueness and multiplicity, with a touch of black humor, the shows creates an eclectic artistic dialogue. (In italiano)

Housed in one of New York City’s largest single-family mansions, the 1908 Warburg House (Felix Warburg was a German-Jewish banker), the Jewish Museum of New York premiered three exhibits including one which was plucked almost entirely from their own world-class collection of Judaica, and experimental works by contemporary artists. All three will remain on view through August 9, 2015.

The Jewish Museum’s Director, Claudia Gould introduced Repetition and Difference, an exhibit that explores the concept of the aura of uniqueness and multiplicity in art. Uncanny photographs are displayed in Laurie Simmons: How We See. Nicole Eisenman’s Seder (2010) is a painting commissioned by the Jewish Museum, exhibited within the context of portraits and objects from the institution’s vast holdings that are seldom seen.

Audiences tend to place high value on originality and uniqueness in art, while copies of the same artwork are often devalued; concepts that form the backbone of Repetition and Difference. By drawing on 350 works of contemporary art, Judaica and archeological objects, the exhibit shows how subtle changes in form, color, or design can reveal intriguing information about their creation and significance, sometimes by revealing clues to artistic process and production, social values and even prevalent political conditions. 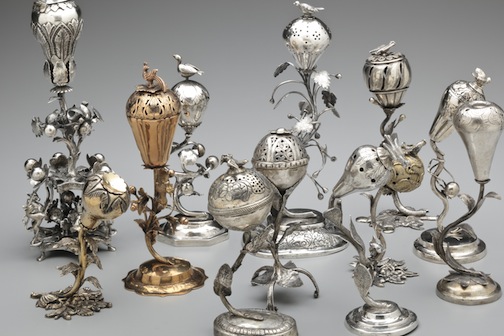 Organized by Susan L. Braunstein, curator of archaeology and Judaica, Jens Hoffman, Deputy Director and assistant curator Daniel Palmer, the team brought large groups of seemingly identical objects together – from Hanukkah lamps to 19th and 20th century Iranian marriage contracts, coins struck in ancient Lebanon, mezuzah cases, elegant silver spice containers and – in a dialogue with contemporary works that evoke the characteristics of mass production, in an effort to humanize their materials through handmade variations on the same themes.

The wall of 45 seemingly identical 18th and 19th century Hanukkah lamps impresses visitors, initially with their sameness and multiplicity. A closer look reveals their flaws and differences, which challenges what at first appears to be conformity. Closer viewing tells the back stories: about the materials used, the shifts in symbolism, the shared themes. More enigmatic are the 37 spice containers created in Poland, fraught with mystical meaning whose designs feature fruit – apples, pears or pomegranates – atop flower stems and snakes, associated with the celebrating of the Sabbath and by extension the expulsion from the Garden of Eden.

Complementing the exhibit, the museum has scheduled several talks including The Lines of Distinction by Susan L. Braunstein about the objects gathered in Repetition and Difference in Art. 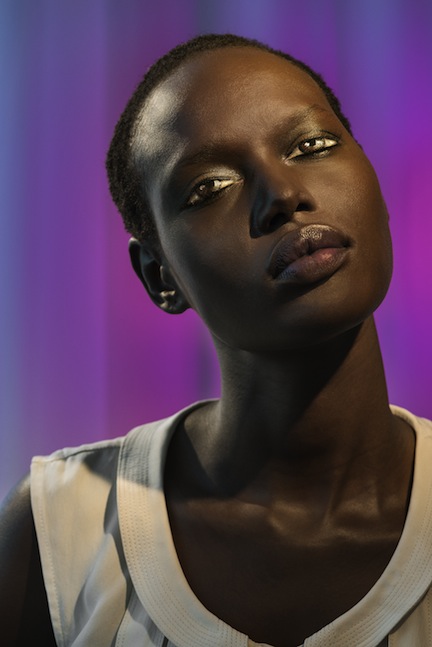 Known for her doll photographs and her nostalgia of the 1940s, 50s and 60s, the Laurie Simmons: How We See is a series of formal portraits set on sherbet-colored backgrounds of models that, while beautiful, stare outwardly at viewers with an alien gaze. Only the excellent museum notes reveal that makeup artists Landy Dean and James Kaliardos used their eyelids as canvasses, lavishly painting eyeballs over their closed lids. Rachel Antonoff designed the unique shirts worn in the portraits. Occupying the former dining room used by the workers of the Warburg mansion, Simmons felt the space demanded “portraiture of a regal nature.”

For Simmons, the exhibit represents a departure. “I am interacting with online culture,” she said, “There is a cult of young girls online painting their eyelids and I think of this as a metaphor for the masks we women wear outside…something like a metaphysical burka.”

The process is an elaborate commentary on the quotidian task of how women “Put on their faces” each day, coincidentally echoing the psychology makeup magnate Helena Rubinstein employed to attract women of all classes to her product line. The exhibit that remains on display at the Jewish Museum throughMarch 22, 2015. 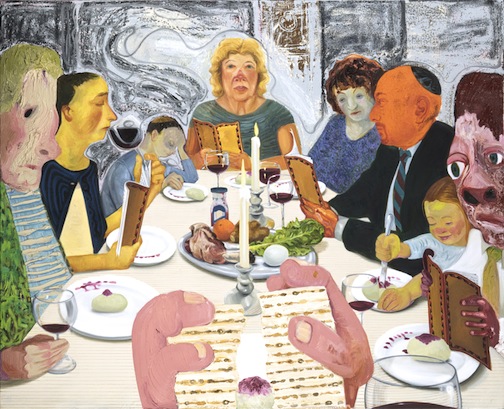 Wine, matzoh, seder plates sit upon the table, surrounded by relatives in Nicole Eisenman’s Seder (2010), a painting commissioned by the Jewish Museum as part of Shifting the Gaze: Painting and Feminism (2010 – 2011). Infused with social commentary from the cartoonish hands breaking the matzoh, to the distorted elders with melting features, to a child playing with her food and a bored adolescent, the painting is the focal point of this Masterpieces & Curiosities exhibition.

Seder is presented within the context of paintings from the 1920s to the 1970s by Moses and Raphael Soyer, Edouard Vuillard, Daniel Oppenheim to more contemporary portraits such as Avraham Ofek’s Silent Conversation, seemingly in dialogue with each other, though they are not actually seated at a Seder table. Yet, Eisenman’s work is the one that carries the weight with its frankness, controversy, dark humor, and unromantic look at a Seder through the eyes of multiple generations.