From (unbuilt) masterpieces, symbols and mysteries, the architecture of the archistar seems to have become synonymous with waste and decadence. Both Rome and New York are two examples of the fine line between extravagance and catastrophe. (Leggi in Italiano)

Eur is a neighborhood of Rome built during the fascist period to host the Universal Exposition of 1942 and show the world the “genius of Roman civilization”. Coordinated by Piacentini, the best architects of the time ignited a lively debate on which the architectural style needed to be adopted to transform this area of Rome which brings “the Baths of Caracalla to the sea”, creating an innovative laboratory for development that is still considered very contemporary even today. Because of the Second World War, the Universal Exposition never took place, but with the imagination of many Italian directors, Eur soon because an urban space with incredible potential. First above all was Federico Fellini, who found inspiration in its metaphysical spaces. Eur continued to evolve throughout the years as the place where one could insert new urban forms, a kind of blank canvas upon which the future of architecture could be painted, until a few years ago with the construction of the conference center known as the “Cloud” by Roman architect Massimiliano Fuksas.

The Cloud was destined to become the new symbol of contemporary architecture for Eur, Rome and Italy. Today, among the great works of the last century and a multitude of new sites lies a lifeless cloud, one of the greatest mysteries of the capital. Certainly known as a symbol for Rome, it represents a waste, the bureaucratic delays and the Italian inability. Few remember when the construction began, but let’s try to retrace the steps of this (unfinished) site. On the eve of the grande Giubileo of 2000, the then mayor Francesco Rutelli proposed a large international competition for the design of the “Nuovo Centro Congressi Italia”. The objective, clearly ambitious, was to give the capital a cutting edge and highly iconic structure that would transform Rome into a showcase for contemporary architecture. The winner was Massimiliano Fuksas, worldwide archistar, with an irresistible project: a mega structure of 55,000 square meters of steel and glass with conference rooms, shopping areas, a hotel, a huge glass enclosure, a rationalist cube, a pure volume that is completely transparent and, contained within it, a sinuous shape in suspension: the Cloud. Expressionist in character, this would contain an auditorium with 10,000 seats. Today, almost twenty years after the event, Rome is still waiting to see the end of this construction which has become, in spite of himself, the symbol of defeat of a country. 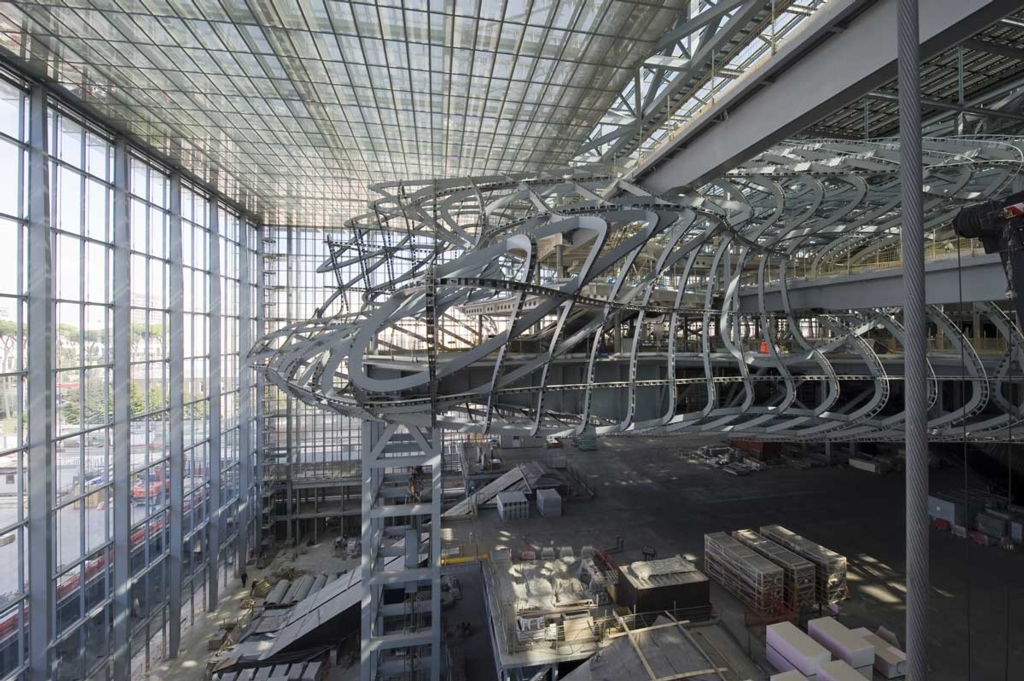 The construction site for Massimiliano Fuksas’s La Nuvola (The Cloud)

To his supporters however, no more was needed; it was simply the promise that this structure would shift the focus and bring it back to Rome, a city that is “sometimes accused of being immobilized by its glorious past”, and would give it a renewed sense of confidence with this “innovative project, bringing prestige and elegance to the capital” without wondering how it would be possible to achieve and, at what cost. Initially, the construction was to cost 130 million euros, but between one contractor and the other, it soon doubled, reaching extravagant figures, especially for a city that currently does not have the resources to run its public buses. But the first stones were finally laid (after the usual proclamations) in December 2007 and the majority of the expenses had to be borne by EUR SPA, a private company with public capital, controlled mainly (90%) by the Ministry of Economy and also (10%) by the Ministry of Finance of the City of Rome, which is in fact the owner of the Eur district and its buildings. Providing this anomaly, that the company was established originally for the organization for the Universal Exposition of 1942 and survived mysteriously to today (though not without scandals). From that first stone began the sad events that surrounded the life of the Convention Center and, to date, no funds are available for its completion. Even Fuksas himself was fired as a result of harsh statements, while EUR SPA has in recent months attempted a puzzling move: changing its statute in order to sell part of the prestigious real estate assets, including important historic buildings such as museums and the Central State Archive, with the aim of collecting funds to complete this unfortunate project. 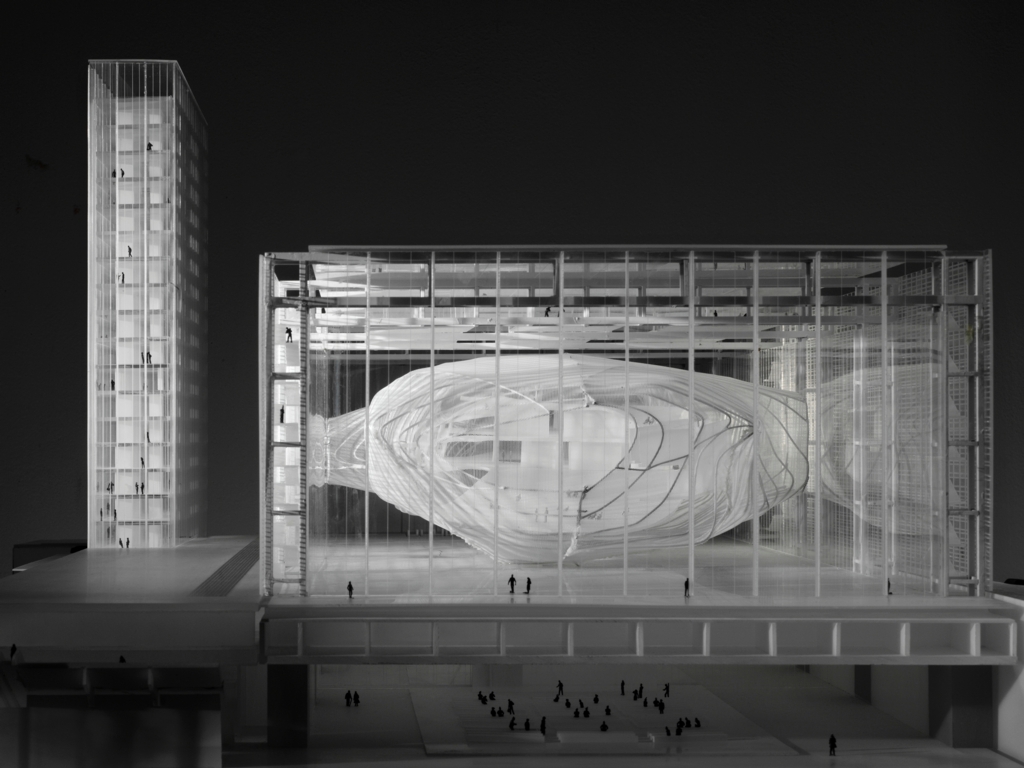 Rather than evoking the lightness of a cloud, the site seems to represent the heaviness of the current situation in Rome. What was to become the new convention center today resembles a steel beached whale: a sad metaphor for the country itself.

On the subject of wastefulness and over-budget projects, let’s look at what happens on the other side of the ocean for one of the most anticipated and talked about projects of New York: the construction of the World Trade Center Transportation Hub, that in recent months has gotten the attention of residents and experts alike, eliciting strong criticism. Its architect is the Spanish Santiago Calatrava, also known for his reputation as an archistar of the 21st century. Many of his fans define his style as delicate yet powerful, likening his work to giant sculptures that illustrate a strong devotion to form. Many critics however, including citizens, architects, academics, and builders, believe that Calatrava is an arrogant architect who is unreasonable and is, for years now, simply accumulating a laundry list of projects painfully marked by heavy cost overruns, delays and glitches. In Italy he is famous (or rather infamous) for the – obviously interrupted – giant site of the “Citta dello Sport of Tor Vergata”, known as the sails and for having built the “Ponte della Costituzione” in Venice in 2008, connecting the Piazzale Roma to Santa Lucia Station, for which the city asked for resources in the sum of 3,8 million euros, significantly exceeding the budget initially declared in the tender. One of the main causes, or rather the most obvious, is that Calatrava seems to solely design singular spaces rather than functional ones: "my objective is always creating something exceptional that can elevate the beauty of a city and enrich the life of its citizens", he says. 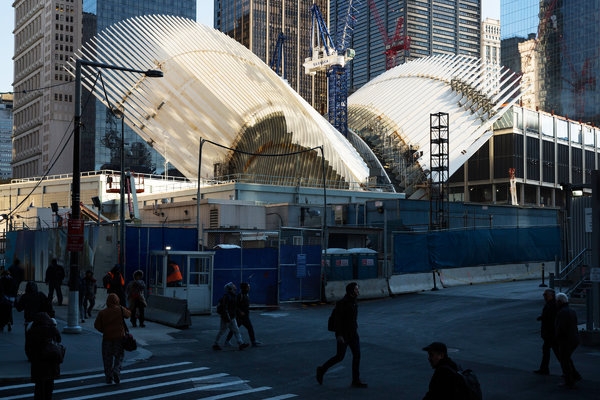 The construction site for the World Trade Center Transportation Hub.

The story that today captures the attention of international newspapers worldwide began ten years ago, during a conference discussing the construction of a great public work on the World Trade Center site. During that conference, many remember Calatrava, who was stumbling to find word to describe this monumental idea to the point where, out of desperation, he left the podium to get pen and paper and finally liberated his ideas through a sketch: the image of a child releasing a dove. That image was the inspiration for the vast structure of steel and glass that is meant to become the heart of the subway lines that converge in Lower Manhattan. It will be a flicker of hope beyond the shadow that was cast by the attacks of 9/11", he says. The project was naturally loaded with symbolism.

A decade later, this transit hub has cost double, both in terms of budget and schedule from what was promised during that conference. Changes to the project (almost all structural in nature) have made it appear more like a Stegosaurus than a dove and made it the most expensive station of the world, costing almost 4 billion dollars. In the last four years in fact, everything seems to be going wrong: request for security increases have increased the number of columns, making the interior structure heavier in turn, construction priorities changed, costs increased, and, slowly slowly critics started to define the project as a catastrophe, placing the station, which has been open for less than a month, under a microscope for its design. In this way, Calatrava, who desired to create an extravagant and futuristic project for the World Trade Center Hub may have arrived at a result which may forever ruin his reputation. After years of delays and cost increases, this bird shaped building certainly seems to be taking flight, but only as the most expensive subway station ever built.