Riots break out in Baltimore fueled by decades of economic violence and police brutality. Freddie Gray dies mysteriously after his arrest by six police officers. Nobody talks about peaceful protests, but cities continue regardless. In New York City the NYPD arrested 143 protesters (Leggi in italiano)

Since the uprising in Ferguson last August, America has paid closer attention to police brutality and by extension systemic racism. The riots in Baltimore made for dramatic television, but what has been viewed by many in the American public to be a spontaneous outburst of violence may not have been that at all.

On the morning of April 12th, a 25-year-old African-American male, Freddie Gray, made eye contact with a police officer, leading to a series of events that would take his life. Gray ran away, followed by the police on bicycles. Ultimately, Gray was arrested for possession of a small switchblade. The antiquated law accounts for one of the top-ten most-prosecuted crimes in New York City, The Village Voice reports.

Officers claimed the arrest occurred without force or incident, but more than one video recording taken after Gray was in police custody appears to show him screaming in pain. The officers ignored Gray’s requests for medical attention. Kevin Moore, who filmed the encounter, claimed in an interview published in the Baltimore Sun that he heard the police tazing Freddie. “They had him folded up like he was a crab or a piece of origami. He was all bent up,” he went on, “the officer had their knees on his neck.”

“The police yelled 'Stop resisting,' but there was no resistance. He couldn't move,” Moore claimed. Resisting arrest is a criminal charge which is often criticized for being used as a pretext for excessive force by police.

After being loaded into a police van, officers failed to place Freddie in a seatbelt, which is a violation of policy. According to Baltimore Police Department officials, the injuries that killed Freddie, a heavily severed spinal cord (almost 80 percent severed) and a crushed voice box were sustained while in the van. An article by The Atlantic claims medical professionals said that those are usually the sort of injuries associated with serious car accidents. This lead many to believe that Freddie was a victim of a “rough ride”, a torture practice by which police officers attempt to jolt around suspects by driving over bumps and making sudden stops and turns.

Freddie Gray died on April 19th after spending over a week in a coma. Peaceful protests broke out in the streets of Baltimore as supporters demanded answers about the circumstances surrounding Gray’s death. The peaceful protests received little media attention or scrutiny. It was not until April 27th, after the funeral, that youths began to riot in Baltimore, looting some stores and burning buildings. Voices on Twitter quoted Dr. Martin Luther King, “A riot is the language of the unheard.” 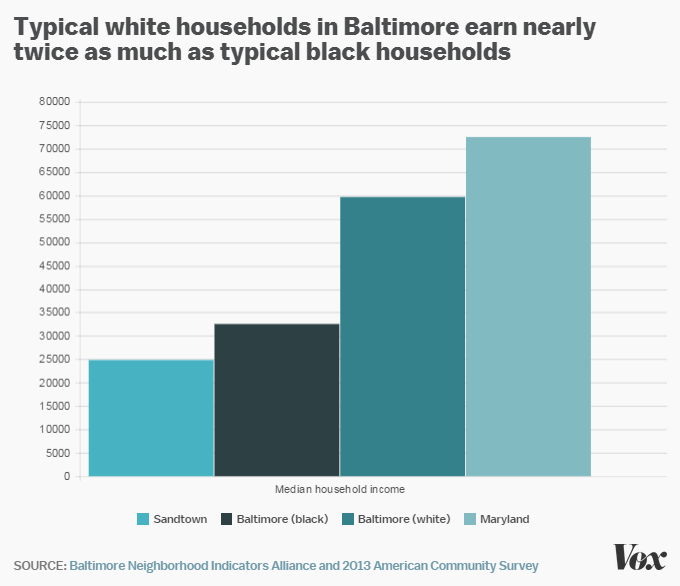 In a heated CNN interview by Wolf Blitzer with community organizer, Deray McKesson, who was on scene in Baltimore, Blitzer asked, “You want peaceful protests, right?” Deray responded, “The people that have been violent since August have been the police. We think about the three hundred people that have been killed [by police] this year alone, like that is violence. There’s been property damage here that has been really unfortunate over the past couple … day or so, here. But remember there have been many days of peaceful protests here in Baltimore City and places all around the country.” Blitzer went on to cite the at least 15 police officers injured, 200 arrests, 144 vehicle fires, and 15 structure fires. Deray accused Blitzer, “You are suggesting this idea that broken windows are worse than broken spines.”

Baltimore, like Ferguson, was a powder keg in that the city suffers from serious racial disparities. In regards to police brutality alone, the city of Baltimore has paid almost six million dollars in over one hundred court settlements related to police misconduct since 2011, and in most cases charges were dropped. The Baltimore Sun argued last September that a hidden cost is that “The perception that officers are violent can poison the relationship between residents and police.”

President Obama, after condemning the violence of rioters in Baltimore, went on to discuss the peaceful protests in Baltimore, saying, “They were constructive and they were thoughtful, and frankly, didn’t get that much attention.  And one burning building will be looped on television over and over and over again, and the thousands of demonstrators who did it the right way I think have been lost in the discussion.” Later, he said “Since Ferguson, and the task force that we put together, we have seen too many instances of what appears to be police officers interacting with individuals — primarily African American, often poor — in ways that have raised troubling questions.  And it comes up, it seems like, once a week now, or once every couple of weeks.” He said, “It’s been going on for decades.” and he added that we cannot rely on the police to solve systemic issues like poverty, disinvestment, a lack of opportunity, and the school-to-prison pipeline.

But the President’s remarks were not enough to quell the anger of protesters in solidarity with Freddie Gray and other Baltimore residents subjected to generations of endemic poverty. Demonstrations, shut-downs, and marches have already taken place in New York City, Boston, Minneapolis, Washington D.C., Philadelphia, Denver, Chicago, Oakland, Detroit and possibly more. 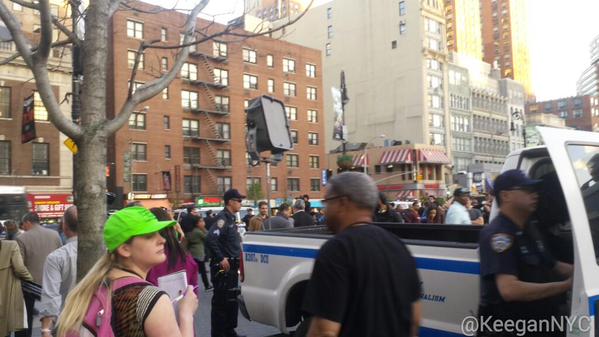 In New York, the Union Square rally on Wednesday was organized on Facebook by Millions March NYC. They organized the Millions March in December, which brought the largest crowd of any march thus far, though arrests were limited. Wednesday, the aunt of Akai Gurley, an African American man who was accidentally shot by police officers last November, declared, “We don’t want 1,000 more cops!” a reference to NYPD Police Commissioner Bill Bratton’s plan to recruit more police for the city (an action took place on Thursday outside of 1 Police Plaza in protest of that plan). The NYPD passed out fliers warning of arrest for disorderly conduct and for obstruction of vehicular or pedestrian traffic, and activists used social media to recruit for jail support; a necessity after mass arrests.

Protesters chanted “Whose streets? Our streets!” but as the volume increased the NYPD turned on their LRAD (Long Range Acoustic Device). LRAD is a sonic weapon that is capable of causing permanent hearing loss and loss of balance, often used to disperse protesters. 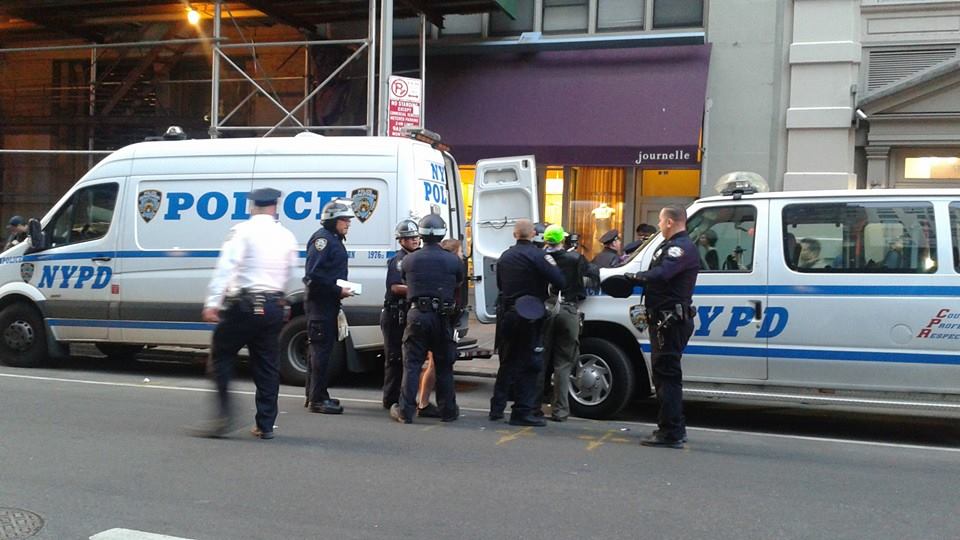 The NYPD surrounded Union Square with police barricades, making it difficult for some to leave. There, a screaming protester alleged that an officer had threatened to shoot him if he jumped over, while placing his hands over his holster. “You had no right to say that to me!” the protester yelled, standing on top of a trash can, followed by a storm of expletives.

Marchers walked through the streets one block before the NYPD began making arrests, and some have claimed that the NYPD made an effort to target journalists and legal observers.

Later, members of the radical marching band Rude Mechanical Orchestra played instruments while others chanted the names of recent victims of police brutality. A representative told La VOCE that ‘rudeness’ is important because “We have seen that the politics of respectability is a dead-end street.”

Throughout the night, protesters shut down the West Side Highway, Broadway, the Holland Tunnel, and Times Square, and possibly other key areas. They were denied access to the FDR. Arrest numbers included 116 violations, 25 misdemeanors, 2 assault felonies, totaling 143. Roughly 30 arrestees are believed to still be behind bars. More marches are scheduled later on Friday, with possibly increased numbers in the tradition of May Day, the socialist celebration of labor.

EDIT: Since the writing of this article, Baltimore City State's Attorney Marilyn Mosby has said that the knife that Freddie Gray was carrying was a legal blade, making the arrest unlawful.