Luigi De Magistris, the Mayor of Naples, talked at the Calandra Italian American Institute of the City University of New York conference. He focused on immigration to and from Italy: “Naples, like New York, is a city on the water. And where there is the ocean there is free thought, an open heart. One can look towards the infinite.”

“He who loves cannot help but create better societies,” said Luigi De Magistris, mayor of Naples, on Thursday evening at the Calandra Italian American Institute of the City of New York, directed by Dean Anthony Tamburri and where Italian-Americans gathered to hear him speak about the controversial issue of immigration in Italy. Since taking office in 2011 the mayor has lived up to his words by actively dedicating his time to culturally revolutionizing the historic city, significantly improving the quality of life for immigrants who settled in Naples, and taking action against the Camorra. 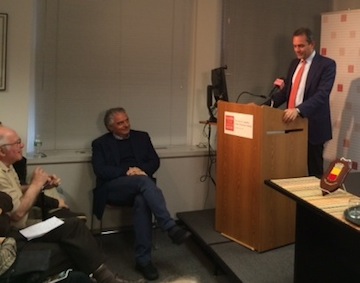 Luigi De Magistris delivers his speech at the Calandra Institute

Over the course of its eclectic history, Naples, which serves as a gateway to the Tyrrhenian Sea, has not only served as a destination for some of the greatest travelers of all time, but it has also been home to numerous cultures and societies, including the Greeks, Romans, Arabs, Normans, and even the Americans. As one speaker, Gennaro Matino, author and professor at Università degli Studi Suor Orsola Benincasa detailed, from the Ancient Greek and Latin philosophies, to pizza and sfogliatelle, and from the influential medieval theological writings of Thomas Aquinas, and the renowned fairytale Cinderella, Naples has produced an infinite amount of art, literature, architecture, and culinary traditions that bear witness to the city’s rich, multi-cultured history. The very fabric of the historic city was woven by various cultures therefore, “it will never be a city that is intolerant of race or culture, it can never be,” stated De Magistris.

In his speech De Magistris aptly likened himself to Paolo Borsellino, an anti-mafia magistrate who was tragically killed by a car bomb planted by the Mafia in Palermo in 1992. Like Borsellino who became magistrate of a Mafia infested Palermo because he saw a situation that needed to be changed, De Magistris stated that he “decided to become the mayor of Naples during one of the most difficult times so that the young generation of people can leave Naples because of their own choice and not out of necessity.”

One of his first actions as mayor included passing an edict that guarantees honorary citizenship to the children of migrants. Unlike in the United States, where if a child is born on American territory he is automatically an American citizen, in Italy, if a child is born to immigrant, or non-citizen parents, he must wait until he is eighteen years old to apply for citizenship. It is an issue that De Magistris believes is unacceptable, and by passing the edict he ensured that the children of immigrant parents will benefit from the rights that come with being a citizen of Naples.

The edict in Naples served as a small yet influential step in mending the situation for the five million immigrants living in Italy, none of which are eligible to vote in political elections, emphasized the mayor. It is an astonishing fact considering that it is the immigrants that are taking many of the jobs that the Italians don’t want to do, causing them to be a driving force in Italy’s unstable economy. De Magistris also reminded the public that these migrants are not settling in foreign cities for touristic purposes, but because they seek a safe haven from the war-ravaged countries they are forced to leave. 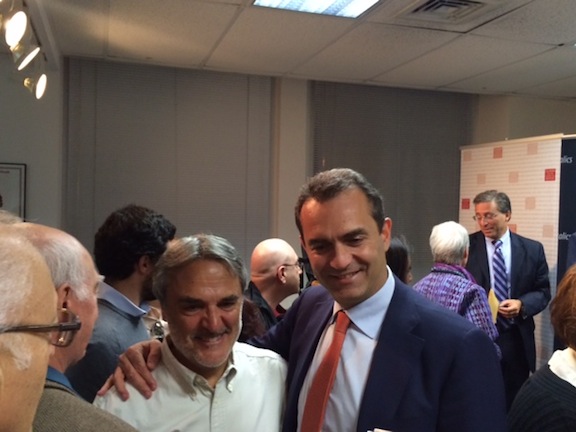 Mayor De Magistris at the Calandra Institute with the Italian Americans

It may seem unlikely that New York City, a modern, sky-scraper filled metropolis shares a resemblance with the ancient city of Naples, but in fact the two have much in common. Upon walking through the crowded streets of this concrete city, which De Magistris is visiting for the first time, the mayor recalled two similarities in particular. Not only do both cities comprise of a population of people deriving from various cultures, seamlessly intermingling with another as they swiftly move through the streets, but he also poetically stated that “Naples, like New York, is a city on the water, and where there is the ocean there is free thought, an open heart, and one can look toward the infinite.” The statement reflects his positive outlook on the possibility of ameliorating the quality of life for immigrants relocating to Italy.

Additionally, New York City, a metropolis whose historical past and present includes a continuous influx of immigrants from all over the world settling on its land, serves as a good example for Naples to follow. According to De Magistris, together, these two momentous cities can work to “build relationships of brotherhood and solidarity, for the globalization of human rights, which is more important than the globalization of money and merchandise.”