The campaign to add “The Art of Neapolitan Pizzaiuoli” to UNESCO’s World Heritage List comes to New York. According to the promoters of the initiative, the exceptional cultural value of pizza transcends national boundaries and meets the guidelines of the World Heritage Committee to be added to the list. The goal is to reach one million signatures by September 2016 / Leggi in italiano

On monday evening, pizza aficionados gathered at Rosso Pomodoro, a restaurant tucked away on the corner of Greenwich Avenue and 13th street in downtown Manhattan, where a vital piece of Neapolitan culture, pizza, is not only being celebrated but preserved. Alfonso Pecoraro Scanio, president of the Fondazione UniVerde, along with Inigo Lambertini Italian Deputy Permanent Representative for the United Nations, and Sergio Miccù, the president of the Associazione Pizzaiuoli Napoletani gathered at the restaurant for a press conference promoting their latest campaign: to add “The Art of Neapolitan Pizzaiuoli” to UNESCO’s World Heritage List.

According to the guidelines set in place by UNESCO’s World Heritage Committee, in order for something to be added to the World Heritage List it must have a “cultural and/or natural significance which is so exceptional as to transcend national boundaries and to be of common importance for present and future generations of all humanity.” Pizza, stated the Italian ambassador of the UN, “Is not only the most known food in the world, but a piece of culture. It is a product of centuries of experience, and of a people who created perfection from nothing. For centuries Italy has transferred it’s food and knowledge to countries all over the world. Now we have this task to enrich the standardization of the classic pizza.”

The campaign aims to preserve the culinary discipline of the Neapolitan pizza, which as it spreads to more and more countries and is imitated and consumed by people all over the world, is at risk of losing it’s original identity. This encompasses not only the use of authentic Italian ingredients, but also the traditional method, or “art,” involved in its preparation. While the art of pizza making was born in Naples, Pecoraro Scanio aims to demonstrate to people all over the world that one “Does not need to be Italian or Neapolitan to make a good pizza, but you do need to learn how it’s done in Naples, where the traditions originated.” 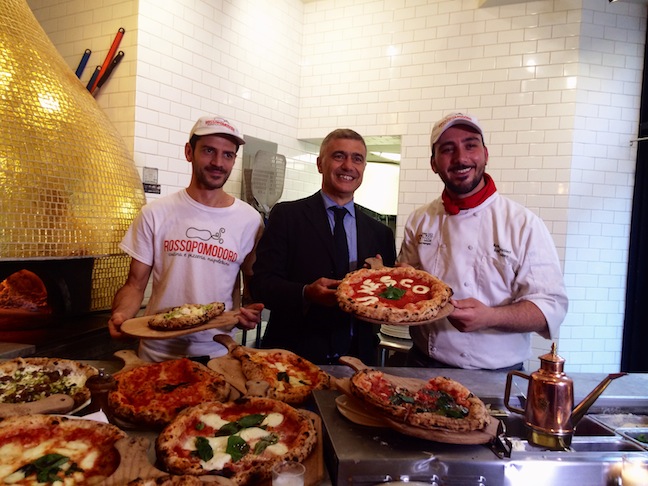 “This has been an idea I’ve had since the year 2000, when I served as Minister of Agriculture,” Pecoraro Scanio told La VOCE. However, the campaign didn’t pick up speed until January, when a nomination proposal for the art of pizza making was submitted to UNESCO. Together “Pizzaiuoli Napoletani” and the “Fondazione UniVerde” have collected 300,000 signatures from people and pizzerias in cities all around the world, including Australia, Japan, Thailand, Seoul, Shanghai, Bangkok, Taipei, Manila, Sao Paulo, Tel Aviv, Moscow, South Africa, and of course, New York. The goal is to gather one million signatures before September 2016 when the application will be submitted to UNESCO in Paris. An official decision will be reached in November 2016.

In order to collect these signatures the campaign coordinators are not only petitioning in Italian piazzas and pizzerias across the globe, but they are also utilizing Change.org, which so far has attracted almost 50,000 supporters. There are hundreds of organizations that create campaigns on the petition platform but, “there was a very rare and extraordinary amount of activity around this issue that was stirred up,” Nick Allardice, Head of Global Campaigns at Change.org, told La VOCE. When asked why he thinks this particular petition has been so successful he responded, “So much of the world has fond memories of pizza, it’s such an important part of so many people’s lives. There’s that thing in common that this campaign manages to connect people to. Everyone has their experiences from when they’re young or when they’re older of sitting down with family or going out to a nice restaurant. I think it’s that memory that this campaign manages to capture.”

Gathering one million signatures is not an easy feat. Each pizzeria participating in the campaign is expected to collect 1,000 signatures. On September 2nd and 3rd, during an event called Pizza Village, which draws over 100,000 people to Naples each year, pizzerias from all over the world who succeed in reaching the goal will connect to a large screen located on the waterfront via Skype. 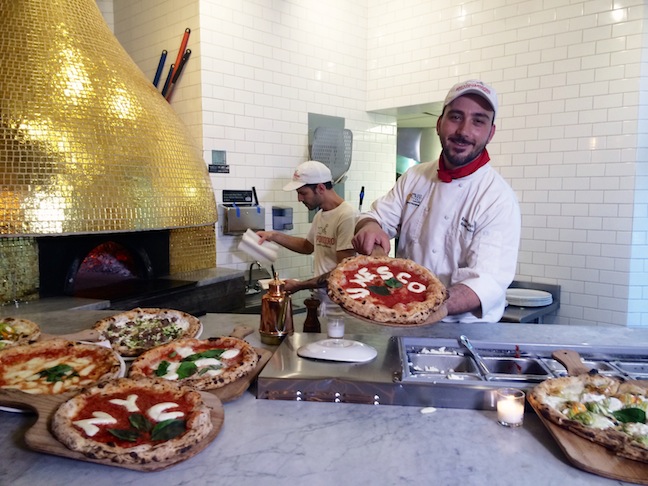 Some campaign supporters who attended the press conference, such Frank and Jeanette Catena, owners of Luna Pizza in New Jersey, work to persevere and spread the “The Art of Neapolitan Pizzaiuoli” on a daily basis. According to Mr. Catena, not only do they insist on using ingredients imported from Italy, but they have also presented their customers with a sort of test kitchen where people aspiring to open their own pizzerias come in to learn how to make pizza. The couple not only works to preserve the traditional art of pizza making by educating their customers on the methods and ingredients that should be used, but also, by filling their restaurant with long community tables they have tried to create an atmosphere evocative of Naples. People can sit at these communal tables, savor they’re pizza, and strike up conversation with their neighbor. “It all goes back to what they’re trying to promote here… it’s about good ingredients, gathering around the table, and preserving an entire way of life,” said Mrs. Catena.

The press conference was one of a series of events that took place in Manhattan this week that emphasized strengthening the connection between New York City’s Italian American community and Italy. The events were brought on by Luigi De Magistris’s, Mayor of Naples, first visit to New York City this week. The mayor, however, did not attend the press conference.