In light of CIMA’s current installation juxtaposing the work of Medardo Rosso and Cy Twombly, CIMA fellow Francesco Guzzetti shares his views on the Cy Twombly show now being presented at Gagosian Gallery in New York. / Leggi in italiano

On view until June 20th at the Gagosian Gallery on Madison Avenue is a selection of late works by Cy Twombly, who passed away in 2011. Five paintingsÔÇòhuge canvases with bright colors and vivid brushstrokes of acrylic paint, six bronze castings of earlier sculptural assemblages, and an hitherto unseen monochrome sculpture of cast plaster and wooden elements painted in brilliant blue compose the exhibition. (Install view 1)

The pieces span from the late 1990s to the last years of the artist’s life, providing visitors with a rich look at the “second youth” the artist achieved in his ultimate workÔÇòyears he mostly spent living in Italy. 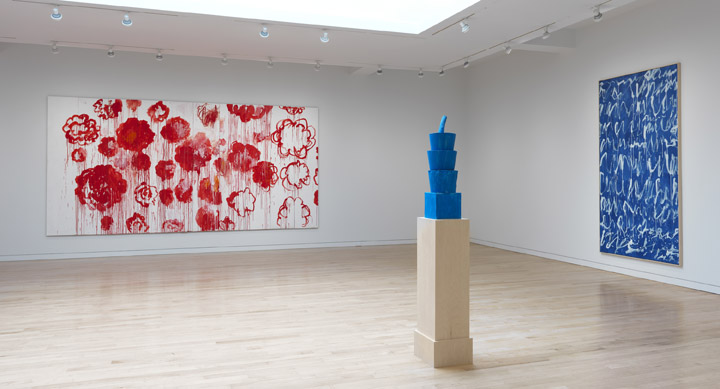 The reference to mythology as a source of inspiration; using abstract composition as a way to evoke literary and lyrical stories; the control of the design so as to achieve a delicate balance between the freshness of gestural strokes and the clearness of drawing; the reference to the tradition of art history as an endless process of acknowledgment of the meaning of artistic practice; the attention paid to the sign itself as a multi-linguistic mark of the artist’s expression; these are all constant features of Twombly’s work, and have been since the very beginning of his career in the late 1940s.

The fascination that his art creates in viewers is made of these multiple layers, and it is summed up in the paintings shown at Gagosian. The two works from the Bacchus series illustrate how important mythology was for Twombly in the creation of a lyrical evocation of an ancestral past, and they show, too, how the artist embodied this with large strokes bearing the vital force of primitive signs.

The two Untitled works in blue and white focus on the importance of the sign. Horizontal sequences of potentially endless white signs look like handwritten lines of a diary sketched on a notebook. They are powerful strokes filled with the tonal effect of a color fading from a thick amount of white pigment to a sfumato effect and interacting with the blue paint laid on the background. 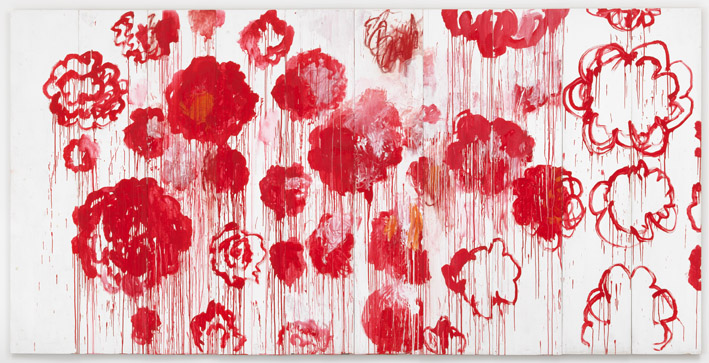 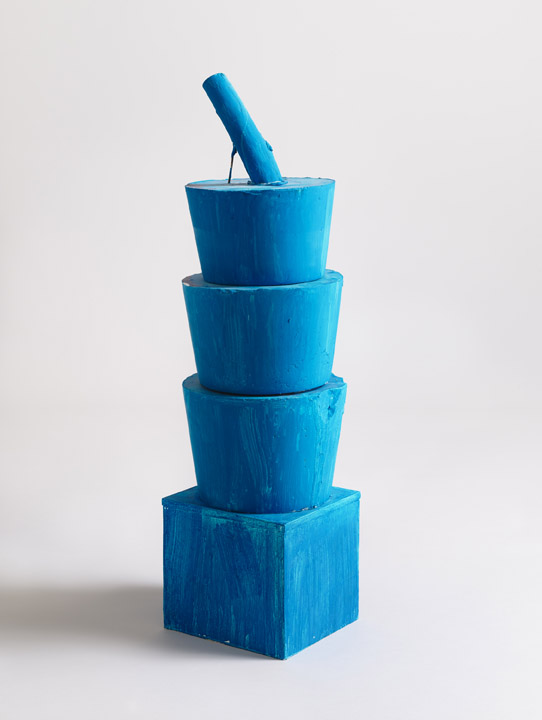 The huge ten-panel painting Blooming, one of the best examples of his works inspired by silhouettes of roses, shows the important role played by material in Twombly’s art. Here, he mixed wax crayon and acrylic, as usual in his production, to create different tones of red in the flowers or of white in the background, depending on the materials applied and on the different thickness of pigment. In this way, the white background itself is no more just an opaque backdrop: it becomes an active counterpart of the colorful signs, reacting with them to create a powerful effect of astonishing brightness.

Brightness is the main features of all the canvases, and also of the plaster sculpture painted blue. Twombly spent about fifty years of his life in Italy, and his last years between Rome and Gaeta. He was charmed by the Mediterranean light he saw by the sea or on the marble and travertine surfaces of Roman palaces. The natural brilliancy of the light of the Italian seashores is the main source of inspiration for the powerful palette of colors he used. It is interesting to note that he made a series of works on canvases that were exactly the same size of the balcony window of his studio in Gaeta, through which he could see the sea. He captured this view in some of his most beautiful photos as well.

Beginning in 1979, Twombly started casting some of his early sculptures in bronze. The idea to do this may have come from his strong relationship with Italy and its artistic tradition. The quite “primitive” and “tribal” assemblages he made in the 1950s and 1960s out of cloth and wood, which seem like fetishes inspired by ancient Middle Eastern artÔÇòtake on a totally new aspect when cast in such a “Western” material as bronze. As we see at Gagosian, they find a new delicate balance between their original fragile and light structure and the allure of eternity conveyed by bronze. The raw surfaces have been left unpolished, as if these pieces were just dug from the earth, traces of an atemporal remote past.

This fragile balance between permanence and impermanence, between time and eternity, between the space of the art and the unbounded lands of imagination is also the impression conveyed by the artist’s paintings. This balance is what makes Twombly’s art seem to whisper to us the innermost truth of our ancestral roots.

*Francesco Guzzetti is a current fellow at the Center For Italian Modern Art.