The process to acquire Italian citizenship is expensive, bewildering, exhausting; yet Americans of Italian origins are willing to put themselves through it with admirable perseverance. Their goal is that long-awaited letter from Rome, with which they can finally and proudly say: "We are Italian citizens" (Leggi in italiano)

I’ve often heard that people of Italian descent born abroad have no sense of patriotism toward the land of their ancestors, aside from superficial aspects that often lend themselves to stereotypes: “Italians are the best cooks, the best lovers, the best soccer players” and so on. But my experience of decades as a translator and consultant at the Italian Consulate General of San Francisco shows me a much more profound patriotism. Thru my computer have passed hundreds if not thousands of people of Italian descent whose determination to reconnect with our land by becoming its citizens defies all bureaucratic obstacles.

The process to acquire Italian citizenship is expensive, bewildering, exhausting; yet these people are willing to put themselves through it with admirable perseverance. Complicated forms need to be filled out, dozens of documents need to be requested, paid for, notarized, amended, copied, translated, mailed; one year’s wait until the Consulate books an appointment, followed by an indeterminate interval of time until the Comuni register the files, followed by a minimum of two years until the Department of the Interior processes the applications, and unforeseen hold-ups at every step. 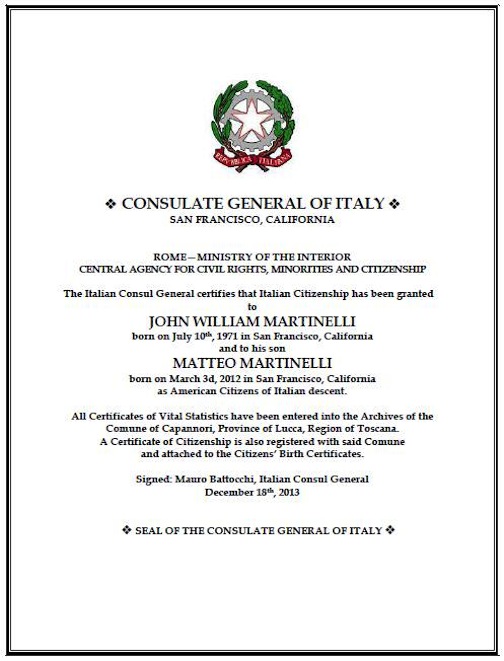 From thousands of miles away and without knowing a word of Italian it’s necessary to go searching for documents scattered thru time and place: the baptismal record of a great-grandmother born in a remote village of Veneto in 1886; the passport signed with an X by a grandfather immigrated from Sicily in 1905; the marriage certificate of parents wed in Abruzzo in 1941; when all else fails, the handwritten passengers’ list of a ship in the archives at Ellis Island. Then there are the names mangled in every possible way by careless American clerks, and for each mangled name the mandatory documentation of the ascendants’ identity.

From those ascendants it’s a cascade of generations reaching down to today’s descendants: doctors and factory workers, newlyweds in their twenties and widows in their seventies who hand over to me their document folders full of the details of their lives so that I can help them reach their goal. And their goal is that long-awaited letter from Rome, with which they can finally and proudly say: “We are Italian citizens. We are the children, grandchildren, great-grandchildren, spouses and relatives of Italian citizens. We have not forgotten our roots.” Patriotism doesn’t get any truer than that.