The exhibition When The Curtain Never Comes Down, on display at the American Folk Art Museum until July 5th, showcases the work of international artists whose lives have been often scarred by traumatic experiences. Four Italians are also featured in this portrait of genius and eccentricity on the fringes of society (Leggi in italiano)

When The Curtain Never Comes Down is the title of the captivating exhibit currently on display at the American Folk Art Museum in Manhattan. Visitors can enjoy a diverse collection of international art works that feature painting, sculpture, photography, audio, video, textile design and fashion.

The show provides an intense experience that can be enjoyed from multiple vantage points: from the sensorial enjoyment of powerful shapes and colors to deep insights into the personal story of each artist. All the artists have one thing in common: a great brilliance concealed under the veil of a peculiar existence on the fringes of society, and a life which has frequently been scarred by traumatic events and, in some cases, by full-blown psychological pathologies. The protagonists of When The Curtain Never Comes Down are self-taught artists, usually poverty-stricken, and with a minimal level of education. Nonetheless, their creations and intuitions often reach the zenith of aesthetics and communication. These works anticipate Contemporary Art at times, and yet recover the traditions and handcrafts of the artists’ homelands. Some of the featured artists are outcasts, who have lived in mental institutions, and whose lives turned into actual works of art. The curator of the exhibition, Valérie Rousseau, describes them as subjects in search “for an alternative space and an alternative state of mind via the creation of an alter ego: they all stepped aside, carving for themselves a new skin to encapsulate a role that suits them better”.

The collection features twenty-seven artists, including the well-known Adolf Wölfli, and four Italians who have lived between the late 1800s and the present day. Included among them is, Giuseppe Versino (1882-1963), a patient of a psychiatric ward and the creator of extraordinary dresses made of old rags that were cut up and then put together again by weaving or braiding. Versino loved to wear his creations that could weigh up to 100 pounds. 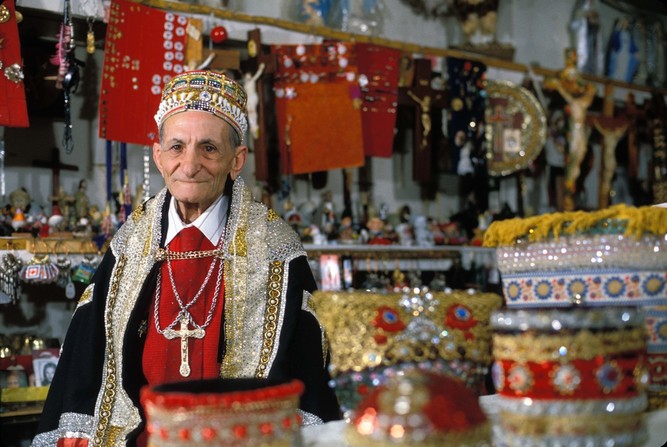 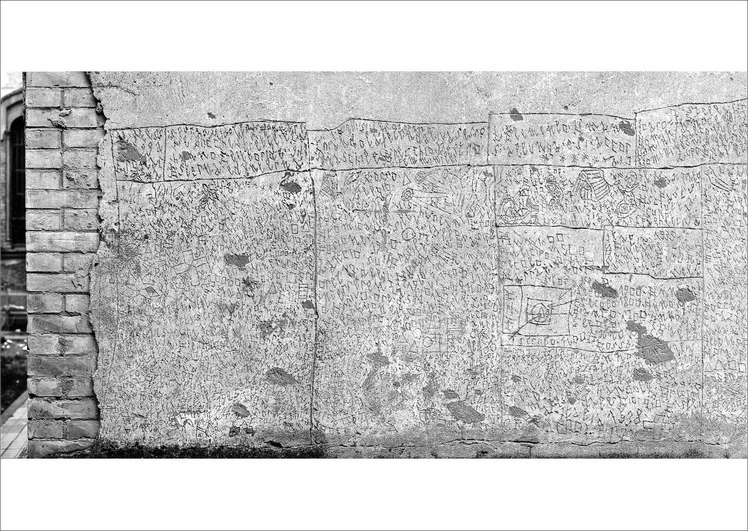 Another amazing example is the work of Palmerino Sorgente (1920-2005), also known as “The Pope of Montreal”, the city he had moved to with his thirteen children. He crafted a series of beautiful papal objects driven by a certainty that he was the Pope. Accordingly, he made portraits of himself surrounded by beams of light and Christian symbols. The museum showcases a series of opulent hats that Sorgente created with trinkets and recycled jewelry.

A personal story of the universe and a new linguistic code are at the heart of Fernando Oreste Nannetti’s work (1927-94). Nannetti carved over 200 feet of the walls of the courtyard in Volterra’s psychiatric hospital, using both texts and drawings to recount his view on life and the cosmos. The exhibition features twenty-four images of his work in an interactive digital format. The images are part of a photo-documentary commissioned to photographer Pier Nello Manoni as a way of preserving Nannetti’s work after the Basaglia Law ordered the shut-down of all asylums in Italy. Nannetti used to define himself as “a mining astronautical engineer,” “a stellar colonel,” and “a nuclear burglar,” and he signed his work as Nanof or Nof4. Nowadays, he is considered an outstanding figure of the Art Brut. 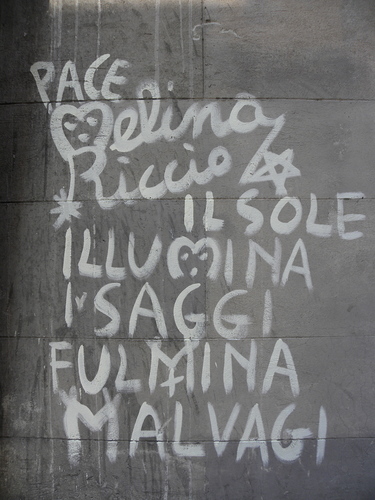 Last but not least, an Italian woman, Melina Riccio (1951-), is featured in the exhibit. Her precious dresses are embroidered with golden designs, unique prayers in rhyme, and patriotic references. In her work the visitor detects a certain naiveté along with a profound sense of beauty. Aside from her dresses, Melina is committed to sharing a message of love and peace in the streets of Rome and Genoa: in order to do so, she uses graffiti, collages, and small paper objects embellished with little hearts and stars. She signs her work with a very unique autograph (see image).

This year, the annual Visionary Award Ceremony organized by the American Folk Art Museum was granted to Ruth DeYoung Kohler, director of the Kohler Arts Center in Wisconsin. The award ceremony took place at the Museum of Biblical Art on May 21st, followed by presentations on self-taught artists. In her heartfelt speech, Ms. Kohler’s shared with the audience the story of some of the artworks that have been acquired and preserved by the Kohler Arts Center. The audience also enjoyed speeches by Dr. Jo Farb Hernandez (San Jose State University) and Dr. Teresa Fiore (Montclair State University), both focused on the discovery and conservation of outsider artists’ creations in their own environments, such as woods, valleys, and working-class districts. In her speech entitled A Home Away from Italy: Self-Taught Environmental Artists in Motion, Dr. Fiore talked about three Italian artists and their works: the Underground Gardens of Baldassare Forestiere (Fresno, California), the Watts Towers by Sabato Rodia (Los Angeles), and the Enchanted Castle by Filippo Bentivegna (Sicily, Italy). Fiore explained the uniqueness of these works in terms of modernity, building techniques, and aesthetics. They all show the recovery of a “memory in motion” that is connected to the artists’ homelands as well as to their experience as migrants in the United States. Just like the twenty-seven artists featured in When The Curtain Never Comes Down, Forestiere, Rodia and Bentivegna transformed their lives into works of art and lived accordingly, as they chose to “inhabit their architectural visions,” said Fiore.

The emphasis that the American Folk Art Museum is putting on the value of Art Brut (or “Raw Art”) with this exhibition is consistent with the appreciation for this genre that continues to grow internationally. Even in Italy, where canonical art and the traditional beauty it represents are at the center of attention, important initiatives are bringing self-taught art into the spotlight. A prominent example is the research of Eva di Stefano, founder of the “Osservatorio Outsider Art” of Palermo, Sicily. The "Osservatorio" is committed to, in their own words, “forms of art that are instinctive, clandestine, irregular, eccentric, made by subjects that can be considered culturally, mentally, and socially marginalized; and to all those art forms that happen outside of conventional paths and the establishment.” The Osservatorio has recently organized “Heterotopias”, the annual conference of the European Outsider Art Association, held in Sicily with great success.

When The Curtain Never Comes Down should not be missed: visitors have until July 5th to visit it at the American Folk Art Museum. Its array of expressive works is touching, shocking at times for the ordeals they recount, and yet deeply fascinating and surprising in revealing the artists’ levity and joie de vivre. The curator, Valérie Rousseau, explains that in these works it is possible to read a caricature of our society. They serve as a mirror for our own small and large daily aberrations, which these artists send back to us in an amplified form, filtered through the lenses of people who are too often easily defined as “outsiders.” It is a crucial lesson that challenges visitors to reconsider the very concept of normalcy, and to reflect upon the importance of art as an expressive need for all of humanity.