The United Nations celebrates its 70th anniversary with an exhibition dedicated to the of the American artist Norman Rockwell, "the people's painter". On display is a painting, considered to be one of the most iconic images of the civil rights movement in the United States, that depicts a six-year-old African-American girl in 1960. The girl in the picture has attended the opening of the exhibition along with Ban Ki-Moon / Leggi in italiano

It is impossible to miss the towering glass mosaic representation of Norman Rockwell’s Golden Rule, on view at the United Nations headquarters since 1985. Sixty-five people hailing from nations all over the world are portrayed looking directly out at the viewer. Donning hopeful expressions on their faces, and the vibrant, rich dress of their home countries, this diverse group of people melds together to form a colorful united whole. It is as if they are saying, “We are all one through our cultural, national, political, racial, ethnic, and religious differences. We are all the same. No one can stand alone. It takes us all working together,” proclaimed Laurie Matoff, Director and CEO of the Norman Rockwell Museum, at Monday’s opening reception of the exhibition, We The Peoples: Norman Rockwell’s United Nations (on view at the United Nations Headquarters until September 15th, 2015). 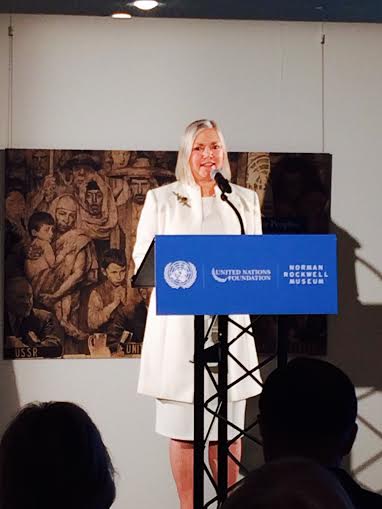 The timely exhibition, organized by Deputy Secretary General Jan Eliasson, celebrates the 70th anniversary of the United Nations, and highlights the most masterful, iconic works of the American artist Norman Rockwell (1894-1978), “The people’s painter, chronicler of America and many nations for nearly 70 years,” stated Matoff.

Among several other works of art, the exhibition features a painting that is considered to be one of the most iconic images of the civil rights movement in the United States, Rockwell’s The Problem We All Live With. The work ironically depicts a clearly harmless six-year-old African-American girl being accompanied by four white police officers to an all-white public school in New Orleans on November 14th, 1960. She walks, with her held high and an impeccably straight back, passed a wall on which are vehemently splattered the remains of a thrown tomato, and on which are roughly scratched the words “nigger” and “KKK.” 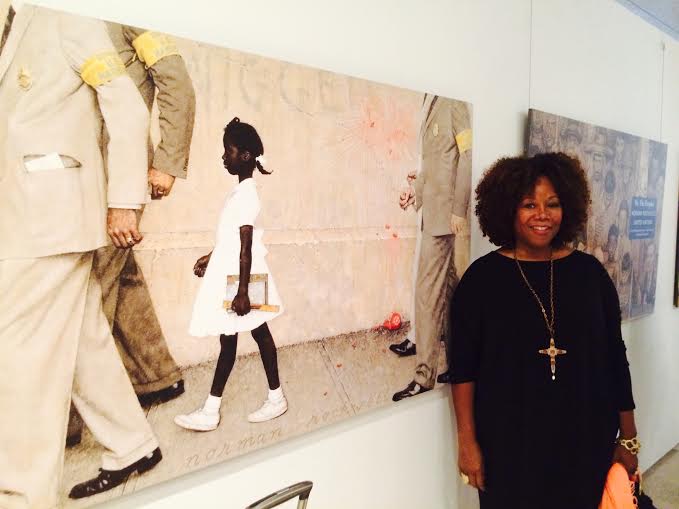 Her name is Ruby Bridges. She was also in attendance Monday night. When asked if as a young girl she understood the importance of the painting she told La VOCE, “No, I was very innocent, not knowing what was going on at time. My parents never tried to explain things to me. They didn’t want me to understand. It would have been very hard for me to go to school with the other children if I really knew. I was about 18 or 19 the first time I even saw [the painting].” 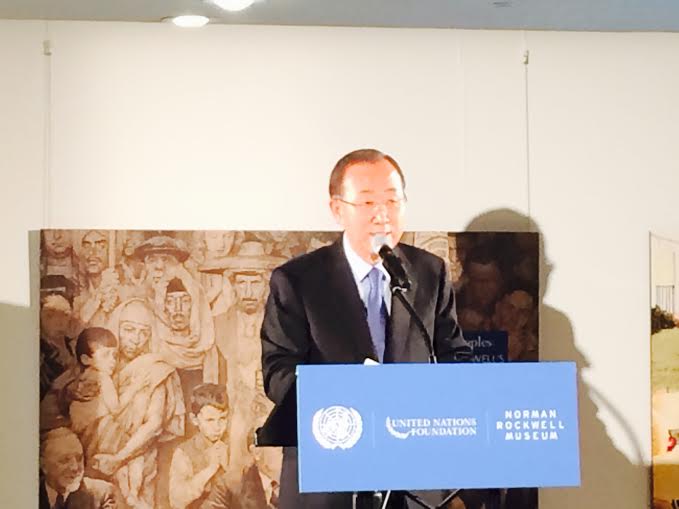 The exhibition also features a work that according to Matoff, “Marked a significant shift in the [Rockwell’s] work and enlarged his vision and his visual commentary from national to international.” She was describing Rockwell’s charcoal drawing titled United Nations, which has never appeared outside of the Rockwell studio, located in Stockbridge, Massachusetts, until now. In 1952, as Ban ki-Moon told to the audience, Rockwell decided to “do a picture that would help the world out of the mess it’s in”. And as it seemed to him that the United Nations was our only hope, he decided to do a picture of a scene at the UN.

At Monday's opening reception Secretary-General Ban Ki-Moon urged a captivated audience to look closely at what is so masterfully illustrated in the full-scale, 8-foot drawing. “You see three ambassadors of the Cold War era representing the Security Council and engaged in a debate. But standing right behind, flanked by the UN flag, are young and old, the hungry and the hopeful, peacekeepers and war-weary – we the peoples,” he explained, quoting the opening lines of the United Nations Charter which was signed 70 years ago on June 26th, 1945. 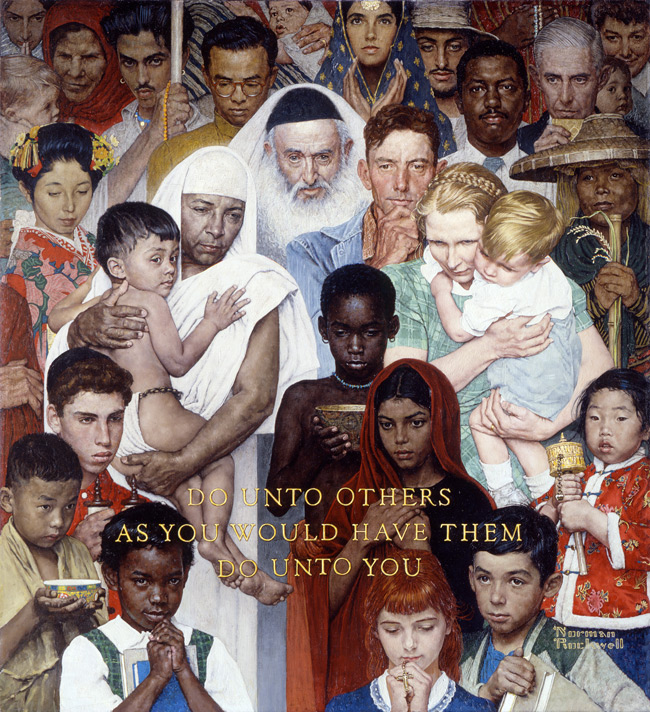 United Nations was never transferred to canvas, but in 1961 Rockwell drew inspiration from the piece to create his infamous painting Golden Rule. This is the same painting on which the UN mosaic, crafted by Venetian artists in 1985, was modeled after.

And so in an intriguing and unexpected twist of fate, we come full circle. “Imagine our wonder when we only recently came to discover that there is a golden thread that leads directly from the Golden Rule right back here to the United Nations,” reveled Ban Ki-Moon.

The exhibition occurs at a time when it is particularly vital to remember, on a national and international front, that despite our religious beliefs, political opinions, and cultural differences, we all bleed the same color, we are all people, all one in the same. Norman Rockwell was a legendary artist who, through his powerful works continues to bring the United Nation’s mission – to maintain international peace and security, and to ensure that people living in nations around the world are freely practicing their fundamental human rights without impediment – to life. His artworks, in the words of Kathy Calvin, Chief Executive Officer of the United Nations Foundation, “Stand as symbols of the human spirit and the spirit of the United Nations.”