Programmer and artist Michael Mandiberg has printed the entire database of the world's largest online encyclopedia. The resulting 7,600 volumes can be purchased online for 500,000 dollars or 80 dollars for a single book. The project Print Wikipedia is illustrated in the exhibition From Aaaaa! To Zzzap!, at Denny Gallery in the Lower East Side until July 11 / Leggi in italiano

In the year 2010 the Encyclopædia Britannica, spanning a total of 32 volumes (32, 640 pages), was the largest printed encyclopedia of the English language. Fast-forward five years. As of 2015, thanks to the ambitious project titled Print Wikipedia, Wikipedia now takes the prize for the largest printed encyclopedia, spanning an astounding 7,600 volumes. At 700 pages per volume, the collection runs a total 5,320,000 pages.

The mission to download and print the free-access, free-content online informational resource in it’s entirety is headed by Michael Mandiberg, programmer, artist, and professor at the College of Staten Island and at the Graduate Center of the City University of New York. On June 18th, at the opening reception of the exhibition “From Aaaaa! To ZZZap!,” on view at the Lower East Side’s Denny Gallery until July 11th, many gathered to watch Mr. Mandiberg begin the upload of Print Wikipedia, a work totaling 11 gigabytes of data, from a Mac Mini to Lulu.com, an online print-on-demand platform. 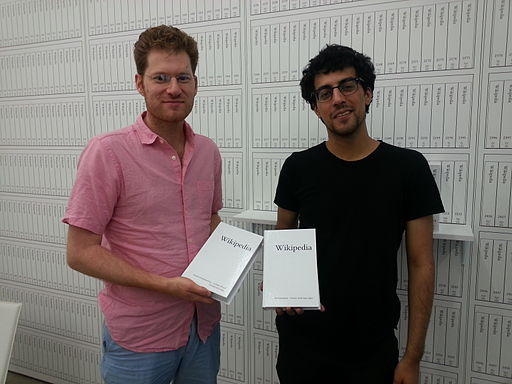 Michael Mandiberg with his assistant Jonathan Kiritharan. Photo: By HaeB (Own work) via Wikimedia Commons

Before pressing “start” however, Mandiberg, along with several other programmers and designers, including Denis Lunev, Jonathan Kiritharan, Kenny Lozowski, Patrick Davison, and Colin Elliot, had to prepare the data for upload. One might expect an undertaking of this size to take months to bring to completion, but in reality it’s only a one-month process. On April 7th Mandiberg started a 4-day download of database backup from dumps.wikimedia.org. He then spent a week unpacking the file into a MySQL database, and next wrote and ran a Java code that turned all the Wikipedia entries into PDFs. After two weeks of preparing the files, they were ready to be uploaded to Lulu.com. Each time a volume is uploaded a tweet is posted to the Print Wikipedia twitter page.

“Essentially, I have written code that mimics a human clicking on the webpage to set the titles, books sizes, choose files for upload, etc,” Mandiberg told La VOCE. 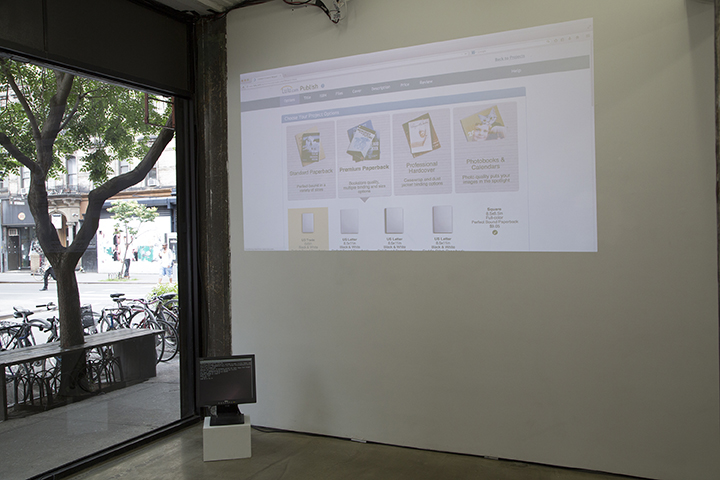 The upload is projected on to one wall of the Denny Gallery, where visitors can watch it happening live. The gallery was open and the upload was run 24 hours/day from 6:00pm on June 18thto 6:00pm on June 21st, save for a few hours on Saturday June 19th when the projection was temporarily taken down due to adjustments that had to be made to the code.

For those of us who can better visualize the enormity of the project in print, and who continue to prefer the, what seems now antiquated, tactile experience of flipping through the pages of a book, two walls of the gallery are lined with wallpaper on which are printed the spines of the first 1,980 volumes. There are also 106 physical volumes on view, which are available for browsing through and can be purchased individually for $68. Any one volume of the encyclopedia can be purchased from Lulu.com for $80, and the entire printed set of the 7,600 volumes can be purchased for $500,000.

Unlike the text of a book that, once it is sent to the printer can no longer be changed, Wikipedia’s content is constantly being edited. Since April 7th have already been over 7.5 million edits made to the data. Mandiberg states that he, “Wnot be outputting a new version every month, or every year.” He does, however, plan to run replicate the encyclopedia in other language. “I would like to upload a Chinese version from Beijing, or a German version from Berlin,” he says. 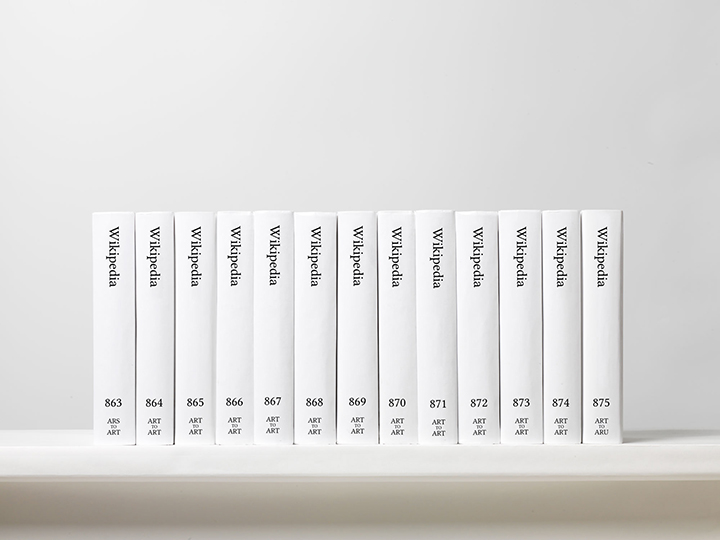 In a recent New York Times article Mr. Mandiberg’s endeavor was questioned as being “futile,” but the programmer disagrees with this criticism. The aim is to measure and understand the size of the free-content encyclopedia that, according to the Wikipedia: Talkpage, claims to “compile the sum of all human knowledge.” “I’m really interested by the ways in which we define and are defined by information,” he told La VOCE. “The Wikipedia database is big data that we can just barely understand. We understand a book as a marker of knowledge. We know how long it takes to read a novel. This [project] offers the opportunity to understand where that threshold is.”