Since Matteo Renzi's former Foreign Affairs Minister has been nominated High Representative of the European Union for Foreign Affairs and Security Policy,  the EU establishment in Brussels has tried very hard to weaken her power. Now, with the "scandal" of porcelain dishes and crystal glassware, Federica Mogherini's "Mission Impossible" becomes even more so... / Leggi in italiano

Why don’t you do the dishes? — Federica Mogherini is an energetic and able woman who has been sacrificed to show just what Italy really counts for in Brussels – not too much, as it happens. Her nomination as chief of EU diplomacy as High Representative of the European Union for Foreign Affairs and Security Policy was a triumph of Italian political will, that is, of form over substance.

“Europe,” which bartered to Italian Prime Minister Matteo the right to nominate the EU’s High Representative for foreign policy and security matters, expected to see a respected former EU Commissioner, Emma Bonino, arrive to take up the job.

When instead the guiltless – and perhaps somewhat hapless – Federica Mogherini showed up in Brussels, the EU establishment decided to make her life a hell, stripping her of all possible powers and leaving her the empty shell of what many people believe is already an empty shell, since the European Union does not, in any real way, actually have a unitary foreign policy to execute.

The role in the Iranian nuclear negotiations of her predecessor, Lady Catherine Ashton – who did not stand out for overwhelming ability – was immediately extended to last for many months after Ms. Mogherini occupied the position, “in order not to disturb the contacts underway.”

This February, the President of the European Commission, Jean-Claude Juncker, suddenly decided to nominate his own Special Advisor for Defense, another former EU Commissioner, France’s Michel Barnier.

Ms. Mogherini found herself in the unpleasant position of having to insist that she herself had agreed to the Barnier nomination “together with President Juncker” and to explain to skeptical listeners that “Obviously, all those prerogatives that the EU Treaty grants to my role; that’s to say, guiding EU foreign affairs, security policy and defense; will stay in my hands.”

At the height of the Ukraine crisis – that is, of a clash between the EU and Russia – the first decisive encounter with Vladimir Putin was handled by German Chancellor Angela Merkel and French President François Hollande. Mogherini, a former Italian Foreign Minister, was not invited. She then explained that she preferred to be a “team player” rather than attempt to manage her own personal image… 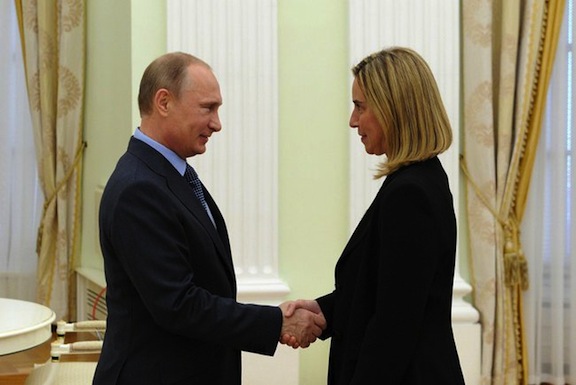 Brussels has, in other words, largely stripped her of any authority that goes much beyond dishes and table settings for state banquets. Now some EU joker has slipped Britain’s Daily Telegraph a copy of a request for tender issued by the European External Action Service – the EU’s diplomatic corps – for the purchase of vast quantities of fine porcelain dishes, crystal glassware, silverware and furnishings for table service, all up to the startling value of three million euro, roughly 3.3 million dollars.

The tableware and place settings – of the highest quality and bearing the EU logo, complete with silver coffee services, ice buckets to keep the champagne cool, candelabras and many thousand of fine crystal whiskey and cognac glasses – are expected to be sufficient to serve as many as 3,360 individuals during banquets at the EU diplomatic service’s Brussels headquarters and at representational offices in 140 countries.

In a phase when the European Union is brutally critical of member states on an almost daily basis over presumed wasteful spending and budget deficits – let’s avoid speaking about Greece in this context – this was not the most appropriate of all possible news breaks.

And in fact, it was denied – well, sort of denied. Ms. Mogherini, or whoever does this for her, rapidly “tweeted” that: “The 3 million is not the real cost, but instead a hypothetical maximum value for this expected expense” and – worse – that the purchase would “enable a savings with respect to past practices.”  Worse because, on reading those words, every reasoning human being would immediately wonder: “What in the hell were they spending before?”