An ongoing exhibit at The Brant Foundation Art Study Center is dedicated to the work of the post-pop artist Rob Pruitt who curated the exhibition himself. Featuring giant pandas, emoji-like faces and a flea market, the show offers a retrospective of the work of this contemporary artist and an opportunity for a natural getaway / Leggi in italiano

On July 10th, CIMA went on a field trip to Connecticut to visit The Brant Foundation Art Study Center, a former fruit barn located in the middle of a field of green that was converted by architect Richard Gluckman into a gallery space.

Opened in May 2009 and founded by the American industrialist and art collector Peter Brant, the non-profit organization seeks to promote education and appreciation of contemporary art and design by making the artworks available to the public through scholarly study, examination and loan.

Mr. Brant’s interest in art was initially triggered by his father, a collector of French Rococo paintings—who taught him how to appreciate art, its history, and its aesthetics. Since his first acquisitions as a young man of two Warhols and a Franz Kline, Mr. Brant’s collection has kept on growing, slowly becoming vast and renowned.

Featuring works by the American post-pop artist Rob Pruitt, the long-term exhibition Rob Pruitt 50th Birthday Bash opened to the public on May 10th, concurrent with the artist’s birthday month, bringing together artworks from the Brant collection as well as loans from Gavin Brown’s Enterprise. As a good friend of Peter Brant, Rob Pruitt got the chance to be the curator of his own exhibition, and he fashioned many of the works right on site. 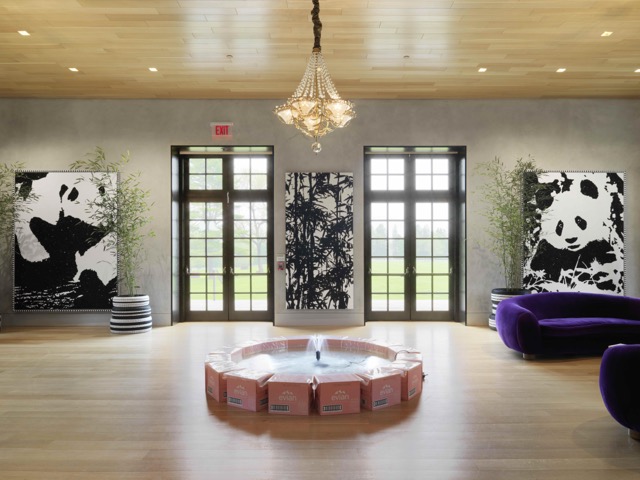 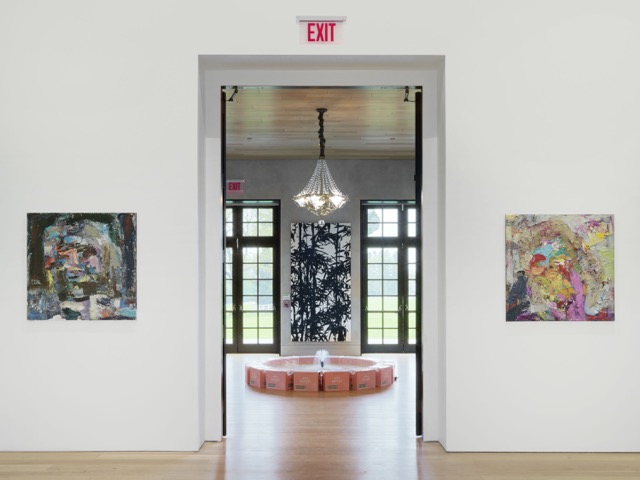 Upon entering the Library Room facing the polo field, Pruitt has taken the foundation’s velvety purple couches and juxtaposed them with a chess-like coffee table evoking the blacks and whites of his signature tire pieces and his glitter panda paintings—also known as Pruitt’s most famous body of work. Lying in the middle of this room, the artist placed a water fountain made out of sixteen Evian water boxes: a product of our Warholian consumer culture as well as a source of beauty and purity. Speaking of Warhol, moving into the next room, one can find hanging on the walls four Ikea canvases of his noted “Marilyn Monroe” bought by Pruitt himself. However, these canvases show barely any signs of the original Marilyns, as the artist has painted over them using his own highly expressive brushstrokes.

In relation to Pruitt’s AbEx Marilyns, there are also six Pollock-like canvases with splashes of pink and red paint on aluminum panels located in the Mezzanine Room. The painting Cotton Candy Frappuccino, named by the youngest daughter of the Brant family, is Mr. Brant’s wife’s favorite, according to the family “likes” system—in which every member placed next to their favorite artwork a heart-shaped Instagram “like.”

In the middle of the Mezzanine Room, we can also see a wave of thirty-four pairs of jeans and poured cement reflected in a large-scale mirror. Obsessed with dance and the idea of becoming a choreographer, Pruitt created Esprit de Corps with the intent of translating his passion for dance into an art form, merging the two of them together. 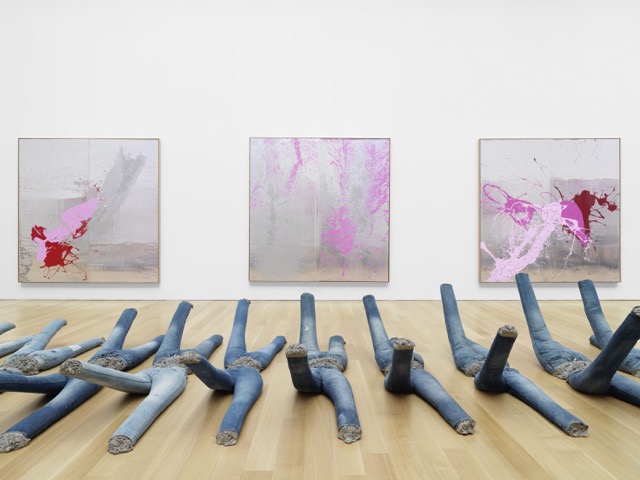 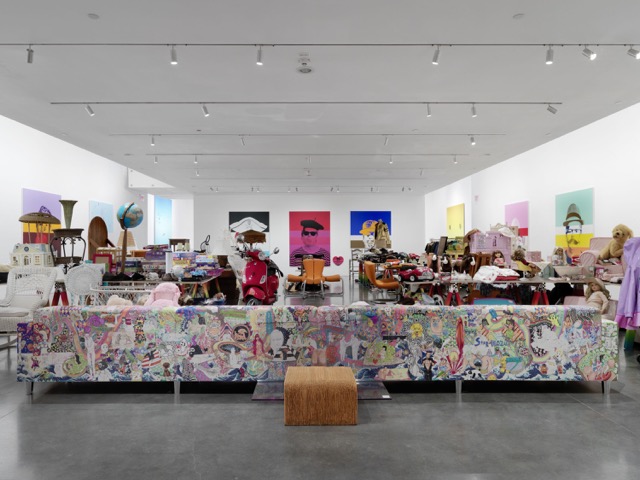 The walls of the staircase that brings us to the lower floor are covered with a crowd of 244 drawings of emoji-like faces with different facial expressions taken from people seen on the streets. Once on the lower floor, we are surrounded by five other bigger emoji-like paintings, this time composed of various color gradients — something Pruitt is really fond of. Tires dipped in chrome paint are stacked up around the room, exploiting old materials in order to make them suitable and pleasing for our disposable society. Seashell and panda white sculptures made of styrofoam are lying on the floor to complement the colorful ambience, while a pair of dyed jeans recalls the vibrant emoji-like paintings on the walls.

The last room of the foundation is the most intimate of the exhibition, because it shows the link that has developed between the artist and the Brant family through the interactive process of choosing the artworks. Being the curator himself, Pruitt invited the Brant family to curate their own items for the show. The Brant Family Flea Market is probably the peak of the artistic ensemble, as it presents old personal belongings of the family members that they decided to sell to the public for charity. Each table represents a family member and their related hobbies. Hanging on the walls are a series of thirteen Surrealist-inspired Exquisite Corpse self-portraits of the artist, where each portrait of Pruitt is assembled with funny and unrelated images of himself.

Before leaving the Brant Foundation, we decided to spend a little time shopping at the Brant Family Flea Market. My friend and fellow intern Erica bought a cute stuffed unicorn for $2, while Heather and CIMA fellow Ilaria found some nice shoes from Mr. Brant’s wife’s vintage shoe collection. Too bad I don’t have the same shoe size as Stephanie Seymour… If you are a 9/9.5 (US) you don’t want to miss out on that!

*Alice Cavallo is a current fellow at the Center For Italian Modern Art.