Introducing NY Artscapes, a new column that will provide an inside look into the lifestyles, the ups and downs, struggles and victories of the artists that shape the dynamic landscape of the contemporary art world of  New York, a city that has a lot to offer, but also asks for a lot in return. / Leggi in italiano

It’s 1913, New York City. The Armory Show has just opened, and it has utterly shattered American ideas about art and beauty. For the first time, the revolutionary event brought the greatest avant-garde, European artists of the age, including Marcel Duchamp, Edgar Degas, and Henri Matisse to Manhattan. The famed show de-, and then re-constructed the long established rules of art making, awakening a spirit among New York artists that, over the next hundred years, would place the city at the epicenter of the international art world. 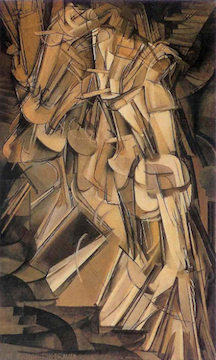 Almost 90,000 Americans attended the Armory show. Most were shocked by what they saw: flat planes of color, plant life unrealistically depicted in shades of blue and red, “primitive,” unrecognizable, representations of the human form. In his The Nude Descending a Staircase (Nu descendant un escalier) Duchamp radically broke down the traditionally classical representation of the female form into a series of splintered, and aggressively linear geometric shapes. One art critic writing for The New York Times derivatively referred to the work as “an explosion in a shingle factory.” Critics mocked and ridiculed the paintings, which obscenely broke from the traditional themes and styles of Realism that thrived in Europe and America in the years before World War I. They criticized the artists as lacking any sort artistic talent.

Others, however, were profoundly impacted by the controversially abstract work, in the best way possible. The show ignited the mindset that would bring about the works of some of New York City’s most famed artists such as Jacob Lawrence, Jackson Pollock, Andy Warhol, Jean-Michel Basquiat, and Donald Judd, to name a few.

There was a time, around the 1950’s, when Downtown Manhattan was the epicenter of New York City’s art scene, home to the city’s most creative and intellectual “left-of-center” minds. Writers, artists, performers, and musicians resided in the then-affordable spacious apartments of SoHo and the East Village, socialized in bohemian bars and cafés of the area, and exchanged ideas in the unconventional art galleries. In the mid-1990’s most of the galleries that once lined the streets of those neighborhoods relocated to Chelsea and the Upper East Side. Today, many of them have started to move to the outskirts of the city, settling in parts of Brooklyn.

Over the last century New York City’s art scene has been in a constant state of flux. From the Abstract Expressionists of the 1940’s and 50’s and the Pop Artists of the 1950’s and 60’s, to the Post-Modernists of today. And from painting, sculpture, and photography, to today’s more experimental mediums and art forms, including body-immersive installations such as MoMA PS1’s Rain Room (2013) and performance art such as Marina Abromovic’s The Artist is Present (2010) (which also took place at MoMA), New York artists daringly continue to push the limits of traditional artistic categories.

Through in-person interviews I aim to gain an inside look into the lives of the artists, whether emerging, mid-career, or successful, who travel from all over the world, and come from all walks of life, to settle in Manhattan, and create and display the artworks that have established the city as the cultural and artistic center of the world. But while Manhattan’s cultural scene does have a lot to offer in terms of inspiration, it also asks for a lot in return. Long gone are the days when artists could afford to live cheaply in spacious SoHo lofts and Lower East Side tenements. Today, rents are high. Most artists are denied the luxury of their own studio, and are forced to seek housing in more affordable neighborhoods surrounding Manhattan, such as Brooklyn or Long Island City. It’s rare that an artist living in New York City can support him/herself solely on their artwork, and most are forced to take on full or part-time jobs. This column will provide an inside look into the lifestyles, the ups and downs, struggles and victories, of the artists that shape the dynamic and constantly changing landscape of Manhattan’s contemporary art world. I hope you’ll join me in my quest to uncover New York City’s enthralling art scene.