The Soho Arts Network was born with the mission “to support Soho’s creative history and growing artistic community.” It was initiated by the Center for Italian Modern Art to combat the misperception that Soho has “lost” its artistic community, by providing a platform for creative collaborations among institutions and artistic leaders. We took the time to explore some of these spaces / Leggi in italiano

Since the closing of the Medardo Rosso show at CIMA at the end of June, we have been taking the time to explore some of the other arts organizations in our neighborhood. CIMA is part of the Soho Arts Network, a family of some 15 non-profit art spaces in Soho. As an intern this summer for CIMA, I was introduced to this extensive network of galleries and museums and have been exploring all that they have to offer.

The Soho Arts Network was born with the mission “to support Soho’s creative history and growing artistic community.” It was initiated by our very own Center for Italian Modern Art. These cultural organizations seek to combat the misperception that Soho has “lost” its artistic community by providing a platform for creative collaborations among institutions and artistic leaders. Their success in increasing awareness of Soho’s artistic community could not be more evident from their participation in this year’s Armory Arts Week.

One of the SAN members closest to CIMA is Storefront for Art and Architecture, situated in the slim and cozy space on the corner of Centre and Kenmare Streets. Founded in 1982, Storefront engages in discussions and ideas at the intersection of art and architecture, and is committed to bringing forth innovative and critical positions. Until recently they were exhibiting Facing East: Chinese Urbanism in Africa, a show that sparks curiosity in international social relations and the rapidly evolving African urban landscape. Curated by Michiel Hulshof and Daan Roggeveen, a journalist and an architect hailing from the Netherlands, the show presents us with an array of photographs the two took on their travels through six African cities. 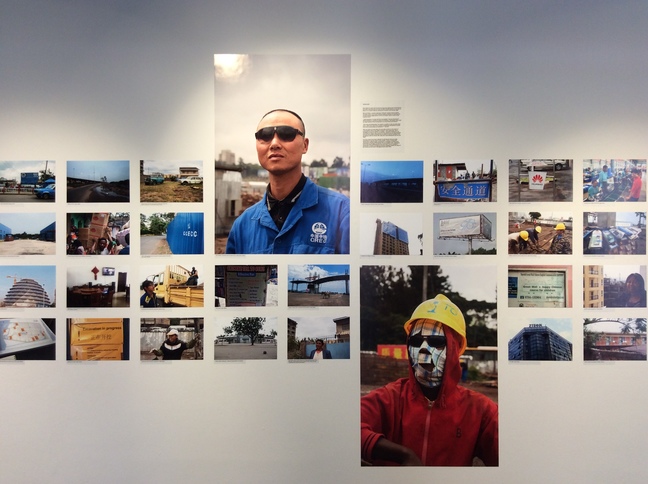 A View of “Facing East” at Storefront. Photo by Cecilia Erica Blume.

As I was born of two distinct cultures (British and Japanese) and raised across the two continents, I was interested in witnessing how two very different cultures and cities, separated by leagues of ocean and land, would come together. The photos on display show ordinary daily scenes in Africa, where we can catch a glimpse of Chinese culture and tradition entering in. This phenomenon of Chinese cultural influence in Africa has been interpreted by some, such as Hillary Clinton, as a new form of colonialism. In Facing East, however, Roggeveen and Hulshof’s approach neither celebrates nor criticizes this connection. As China “gifts” and funds new infrastructure, roads, buildings, and national monuments in booming African cities, you can also see their marks being made on a smaller scale: a fire extinguisher in a building where the instructions are all written in Chinese, or an ATM machine’s home screen that depicts Chinese architecture accompanied by words such as “It’s like you never left home.” 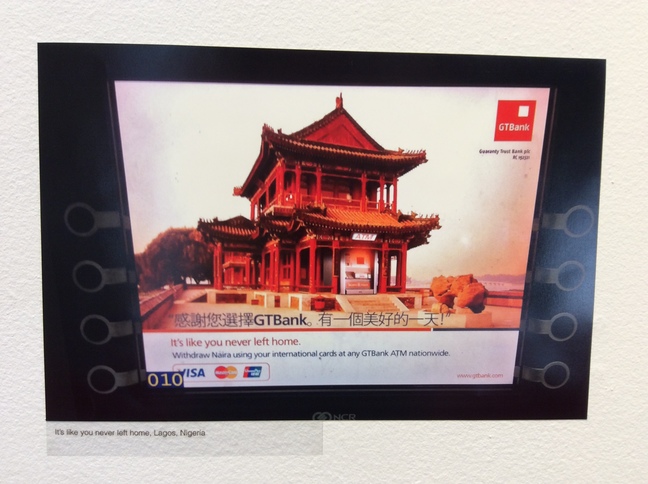 Snapshot of the photo of an ATM in Nigeria at Storefront. Photo by Cecilia Erica Blume.

I also visited, together with the other CIMA interns, The Drawing Center on Wooster Street. This gallery has a frequent turnover of exhibitions and is worth checking up on each month to see their latest presentations. The Drawing Center prides itself on its dedication to the “medium of drawing as primary, dynamic, and relevant to contemporary culture, the future of art, and creative thought.” Their activities include open drawing sessions, education and public programs, and a publication series. 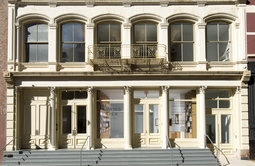 On our trip we were able to see the exhibition Robin Rhode: Drawing Waves (on display until August 30th, and definitely one not to miss). Rhode, a South African-born German-based artist, worked with a group of children ages 8-10 years old to create a large mural in the lower level of the Drawing Center. Rhode’s signature pieces often involve stop-action photographs, in which a person is photographed as if mid-movement, pretending to perform an action. This particular mural started off with black vinyl cutouts of mid-seventeenth-century mercantile ships stuck on the wall, and then the artist invited the children to draw wave lines across the wall using enormous, custom-made oil crayons. The result is an inspiring chaos of free and shaky blue lines, which is nevertheless peaceful as you walk from one end of the mural to the other, following along the children’s lines. 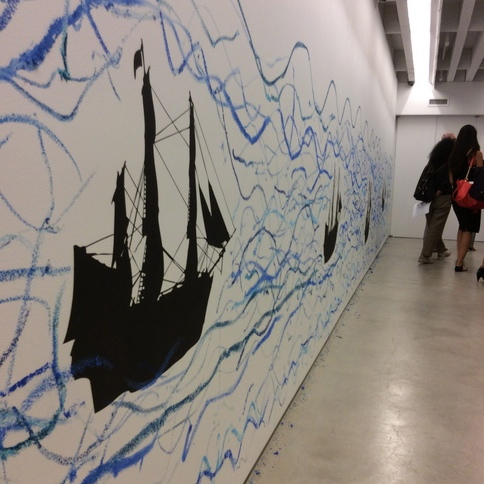 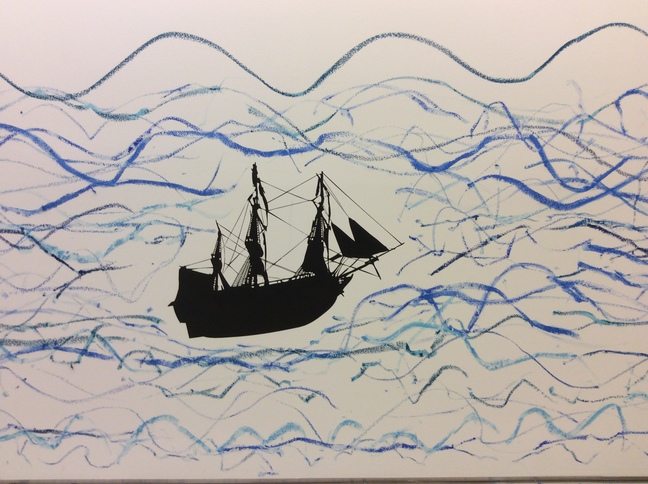 Spending the three months of my internship wandering around the Soho area, feeling the vibes of a flaneur, I was able to engage with different forms of art on a daily basis. To think that some perceived Soho to be losing its artistic heritage almost seems absurd when around every corner, in between every other boutique, you find a space dedicated to design, architecture, photography and so on. The Soho Arts Network certainly helps in increasing the appreciation for these institutions and the long and interesting history of the arts in Soho. I look forward to seeing their future collaborative events. Next time when you find your feet aimlessly leading you through those streets, keep a map of the SAN around and don’t miss what these spaces have to offer! There’s something there for everyone.

*Cecilia Erica Blume is a Summer Intern at CIMA.