Sunday 23 dozens of topless women and many more photographers marched on the streets of New York. The women were protesting for equal rights, for the right to stop hiding their bodies out of fear of being sexualized / Leggi in italiano

On the Sunday afternoon of August 23, in Midtown Manhattan, topless protesters gathered at Columbus Circle for a parade to Bryant Park.

Roughly a few dozen women went topless, as well as some men. Far more numerous than the protesters were the photographers eager to capture the spectacle of a bare pair in bustling Midtown.

“All in all, I expected there to be more topless people,” a woman who identified herself as Luna told me, saying that both sexes were underrepresented. “There’s a ridiculous ratio of photographers to actual participants.” 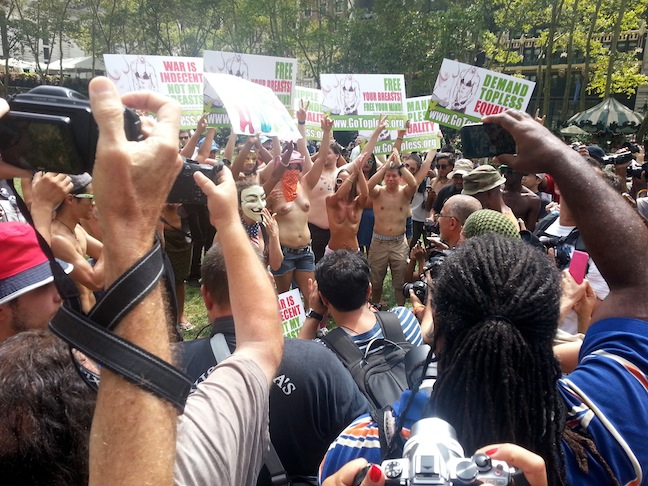 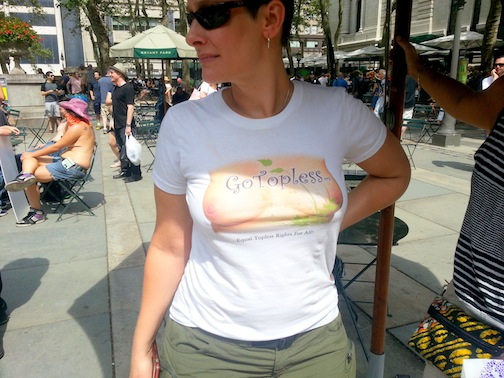 During the march, one topless woman walked along the police barricade shoving her smartphone and snapping pictures of the innumerable faces of gawkers with cameras. The women were protesting for equal rights.

It is legal for women to be topless in public in New York. The Court of Appeals’ 1992 ruling established that woman may go bare-chested, but may not do so for commercial reasons. The case centered on seven women, the Topfree Seven, who picnicked shirtless in Rochester, New York. The court ruled in their favor, and New York women won the right to toplessness though the court did not find the old law discriminatory, reports The New York Times.

The parade coincides with the controversy of Mayor de Blasio and his promised aggressive crackdown on the naked body painted women who solicit tips from tourists in Times Square. He is considering tearing down the plaza to deal with the issue of tip solicitors in Times Square. 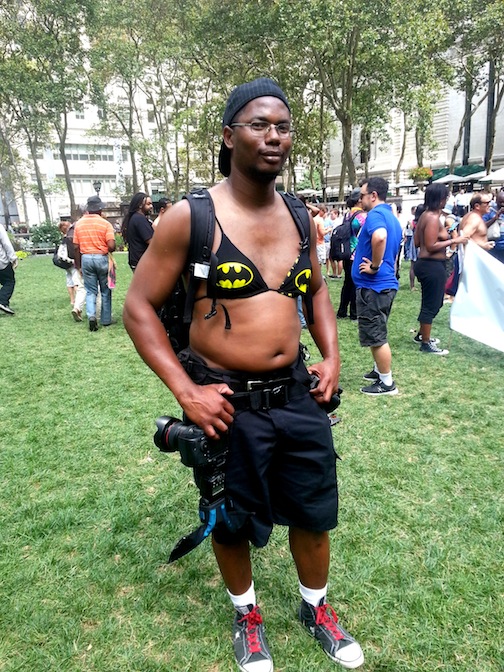 In the days prior to Go Topless Day 2015, August 23, talks of the liberation of the nipple could be heard on the street, or promoted on a bar’s sign. A movement of women on Instagram was spawned this year under #freethenipple. Even the bookstore I frequent is selling felt nipples.

Phoenix, a speaker with GoTopless.org, a group that organizes topless protests in more than 60 cities worldwide, spoke over the microphone at Bryant Park. Shaking, her voice drowned out the incessant quick successions of a camera’s click.

“We need to stop it now. We need to make it so that mothers can breastfeed their kids without getting stigmatized, harassed and kicked out,” Phoenix said before making the case that such stigmas lead to body dysmorphia. “The perversion is your problem, not mine. You stop it,” Phoenix said to the crowd’s cheers.

“This is about going topless as much as Rosa Parks was about buses,” Phoenix told the crowd at one point. She went on to encourage participants to go to New Jersey next for a mass protest, where she has encountered legal problems and has been arrested for her activism. “I hope to go back there with all of you. Please come with me. I hope to do a mass-total topless demonstration. We can all get ticketed, we can all bring it back up to the supreme court, and in the numbers I am hoping that we can make it a federal law (to allow women’s toplessness).” 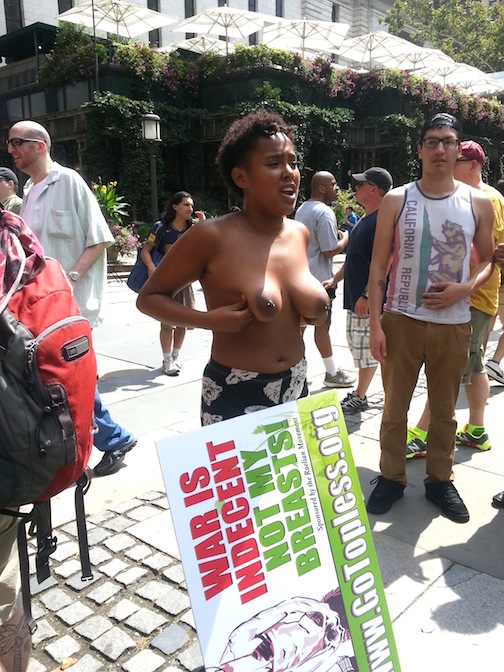 Another speaker spoke more on the history of women’s rights. “It was in 1920 that the equal rights amendment was passed,” she said. “We now take the right to vote for granted, but still we have inequality. Being topless may sound like a silly thing. It’s silly because people still aren’t comfortable with it.”
“In the 1920s it was considered risqué for a woman to show her ankles, and women would be fined or thrown in jail if they exposed their knees.”

After the rally I took the time to sit on the grass of Bryant Park with three topless women and a topless man, from Brooklyn, they said.

“We came here because we wanted to experience toplessness in New York City and to feel the excitement and fear,” one of the women, Rachel, told me. Another did not wish to speak.

“There are a lot of people sexualizing us without our permission, though,” Rachel said.

In discussing the Times Square controversy, which is partly due to City efforts to make Times Square more ‘family friendly,’ Luna, who was sitting with the group, said: “Children see more breast than anyone. Five years ago, they were very familiar with the breasts.”

What could be more family friendly than a mother’s breasts? “Menstrual cycles,” Luna tells me. 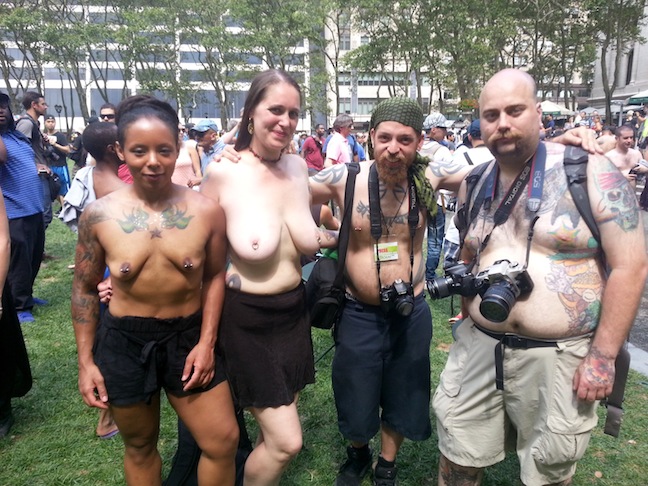 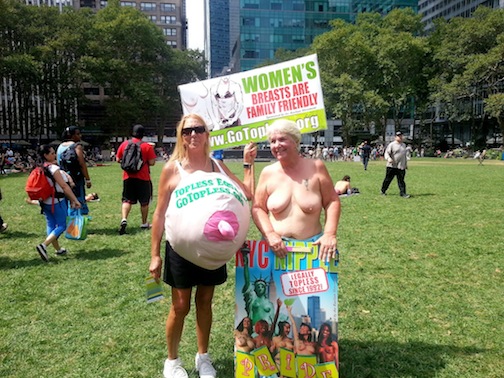 The man sitting with the group, who identified himself as Charlie, took issue with de Blasio’s stance on the painted women in Times Square, though he acknowledged that it was a separate issue from the protest. He said that 30 percent of the tips that the girls make go to their bosses, who are “pimp-like characters.” He spoke in favor of Ruben Diaz, a New York State Senator who is proposing legislation that would make toplessness for both men and women illegal. “At least he’s not being sexist about it,” Charlie tells me.

Others were more skeptical of legislation that could lead to a new low-level offense for the police to enforce.

Charlie came shirtless to the protest, which he began following three years ago, to support the cause. “Ultimately it’s about normalizing it so that woman (who go topless) don’t get harassed,” he told me.

“Because I have more fatty mammary glands I don’t get equal rights,” Rachel pointed out. On the many photographers present, she said, “In our attempt to desexualize our bodies they are further objectifying us”. 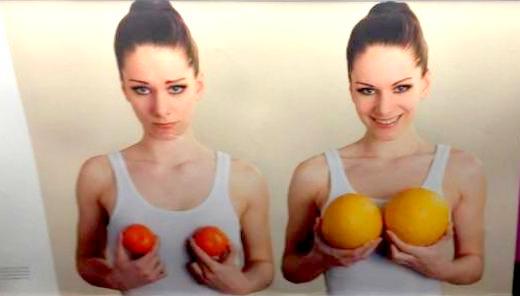 On desexualizing the breast, Luna added, “You have to decide whether reacting to other people’s perceptions is more important than acting own your own perceptions.”

While I stood on the downtown F train on my way back home to begin writing this story, I contemplated the things that I heard and the bravery of the woman who protested topless amongst a sea of cheap thrill-seekers. I looked up and I saw a familiar advertisement, one for breast augmentation. On it there are two pictures of a girl. In one, she is pouting and holding a tangerine-looking fruit over her breast. In the other, she is smiling and holding up grapefruits.

Such is state of women in New York City in 2015. Toplessness has been legal since 1992, but what’s behind the bra is still subject to much scrutiny.

This article was originally published on WordOut.nyc