Experimentation, improvisation and a reasoned anarchy of sounds: in these elements lies the strength of the band OU (‘egg’ in the Sardinian language) founded by the jazz trumpeter Ersilia Prosperi. After two long tours in the US, they now present their new project Scrambled!, produced by the exceptional American multi-instrumentalist Amy Denio / Leggi in italiano

About a year and a half after the presentation of their first recording Pisces Crisis, and after two long US tours with a stop in New York last spring, Denio released Scrambled!, the second album by OU, (‘egg’ in Sardinian), the eclectic band founded by Ersilia Prosperi, who is a jazz trumpeter, composer and much more. Scrambled! is the title of OU’s latest recording project; from the first listen it reveals a fresco tinged with eccentricity and savage irony, experimentation, improvisation and a rational anarchy of sounds. 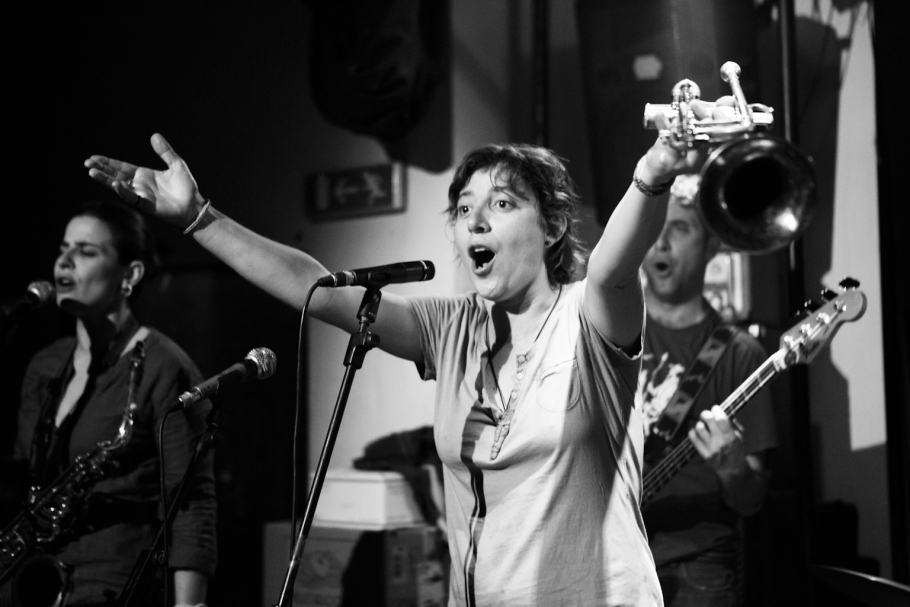 In this spectrum of expression one hears the strength of Ersilia and other members of the OU: The soprano Cristina Pecoraro who also plays the alto sax; Martina Fadda the lead singer; and three Roman musicians: Andrea Pesce on piano, fender Rhodes, Hammond organ; Claudio Mosconi on bass; and Christian De Fabritiis playing drums, vibraphone, glockenspiel.It’s necessary to abandon all other activity, close one’s eyes and listen to the crooked free jazz and enthralling American swing, detecting strains of a bit of English folk à la Nick Drake and the delicate touches of many other elements, then spread out the written texts which target and desecrate newspapers and common places. You’ll hear Non c’è niente da lavare (there is nothing to wash), built on a joyful and unleashed bass line, and s'OU Abbattadu (scrambled egg), created with a large horn section and elaborated with the "preacher" Keni Cohen describing the world through the eyes of a hard-boiled egg. The other pieces follow this research design, while the carefree trumpet of Ersilia rages a little bit everywhere ~ with irresistible panache.

Even if Il Volo wins the Independent Italian Music Producers Award in 2015 for the "high contribution to the enhancement of Italian musical culture in the world", the case of OU shows that mainstream music is not the only Italian commodity exported abroad. One person convinced of this is Amy Denio, the exceptional multi-instrumentalist recently voted into the Jazz Hall of Fame in Seattle, who had no hesitation in producing Scrambled! for her record label Spoot Music, in collaboration with Public Eyesore Records.

Amy, how did you get to know the band OU, and why are you passionate about their sound?

"I’d played in Rome many times with my all-women sax quartet with drums The Tiptons Sax Quartet, often in a double concert with one of Ersilia’s various projects. In June 2013 I returned to Rome to play on the occasion of my birthday at Baffo della Gioconda with Roberto Fega and Adriano Lanzi. I met Ersilia once again that evening, along with other members of the group. They gave me a heart-shaped red balloon covered with ‘Happy Birthday!’ and ‘Best wishes’ with a CD dangling below. I listened to the CD many times in the following days and was completely impressed by the vital music filtered by the compelling and strong colors of the Mediterranean. Ersilia called me a few days later, and asked me to produce her new album; I said yes without hesitation. OU came to Seattle in October 2013 to record their first album Pisces Crisis, and since then we have rarely parted ways. We toured the US in June and October 2014 playing concerts in delightful places, greeted by audiences passionate for the music of OU and their joie de vivre." 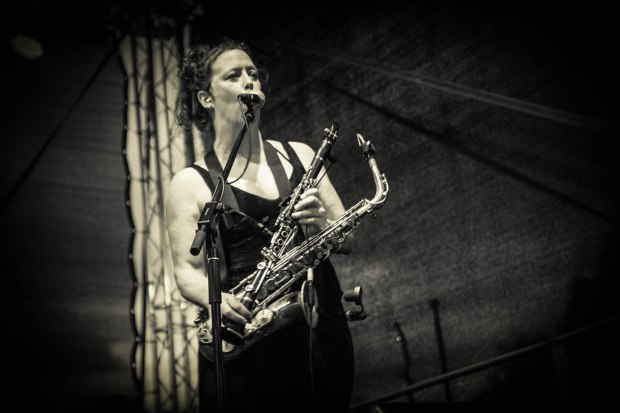 Will there be concerts presenting Scrambled! in America?

"We are not certain when the next concerts in the US will occur, but we’re working on it. Obviously, one can’t miss New York City, which remains a landmark for indie and experimental music from around the world. But first we want to win the European public. I will arrive in Italy in early October 2015 to begin our tour in the Old Continent."

In your opinion, what is the ideal audience of OU?

"During our tours, we discovered that our ideal audience is made up of courageous and lively people, those who still want to have fun and to listen to music outside of the influence of mainstream culture. And let's not forget that American music is composed of a mixture of influences from Europe and beyond. It so happens that in the United States, the listeners are more willing to accept those projects, especially when it comes to discovering new music in which they can find clues of their original cultures."

How has the American independent music scene changed?

"I’ve been part of the American independent music scene for almost 30 years, and one can no longer speak of niches or categorize culture. Now there are tour routes, the scene has developed its own dialect, and the audience grows continuously. Today, more than ever we need musicians able to disassemble commercial music’s typical conventions of linear smoothness, and to offer provocative perspectives on social issues, to take responsibility to do something courageous, and not get sucked in by the carousel of ether. OU provides a perfect example of bucking the system."