Set your eyes on one of Giorgio Casu’s paintings and you’ll feel yourself being whisked away to a colorful realm reminiscent of Oz, full of exotic animals, mythological creatures, spiritual symbols, and fanciful architecture. In a city known for always keeping things too real, through his artwork, Sardinian-born artist Giorgio Casu makes the impossible possible. “I want to show people that if you believe in it, you can create something that doesn’t exist in nature, and make it become art,” he said. 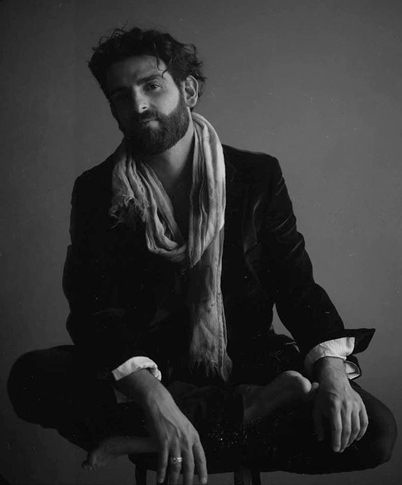 Messy brown hair, unruly beard, Casu looked like the quintessential New York artist when I met him on West 38th Street. He was departing for Milano the very next day to participate in the Biennale. But first, he needed to dismantle his latest New York City exhibition, “One Perfect Darkness,” on view at the Hueb store on Madison Avenue from July 23rd – 30th, 2015.

His life as a full-time artist began in a rather unexpected, roundabout way. “I never studied painting, not even for a minute,” he said. The self-taught artist, born in 1975, is actually a Doctor of Education. During the 1990’s he worked in a psychiatric center with children with disabilities. Unbeknownst to him, he was about to discover a painterly talent that would alter the trajectory of his career. “I started practicing art therapy with [the children]. I explored drawing and painting. By 1999 I was ready to work with color.” In his studio located in his hometown in Sardinia, Casu produced vases, caricatures, masks, and paintings on wood. “I have a twin brother, Giovanni, he’s been painting since he was 18. Our house was always filled with canvases and artworks,” he recalled. But Casu didn’t start working with acrylic paint until 2002 when he moved to England, where he began exhibiting his work through various shows. Today, though he considers himself primarily a painter, Casu’s talents extend far beyond the canvas. He also organizes and participates in music and cultural events around the globe, does body painting, and creates street theatre performances.

His art and his passion for traveling have led him to lead a nomadic life. Paintbrush in hand, he has voyaged to Australia, Mexico, Costa Rica, England, Fiji, India, and the Philippines. In each place that he visits Casu fully immerses himself in the culture, practices the traditions, explores the religions, and innovatively translates it all into his artwork.

His travels continue to have a very visible impact on his work. While in Australia he worked with aboriginal artists and carried out ethnological research on the territory. Aboriginal art is based on symbols and ancient stories that have been handed down through the generations and are centered on 'the Dream Time,' the period in which Indigenous people believe the world was created. Therefore, it is no coincidence that if you take a look at one of Casu’s acrylic paintings, which colorfully feature surreal settings, you will feel as if you have been immersed in an enchanted dream world. A realm far removed from reality, where time does not exist, events unpredictably unfold, and possibilities are endless. 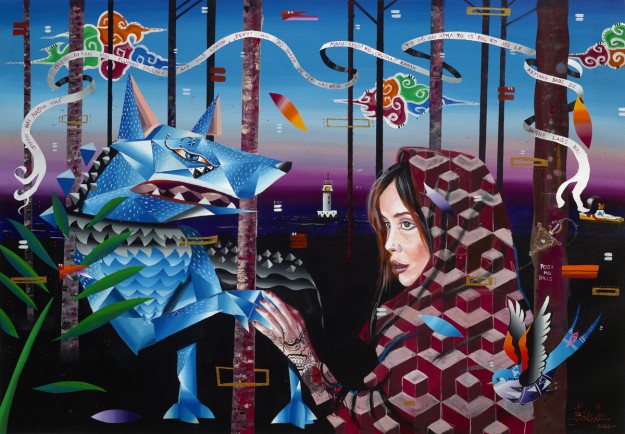 While Casu’s oeuvre undoubtedly evidences an individual style and a visible break from the traditional canons of painting, I can’t help but be reminded of the 15th century Netherlandish painter, Hieronymus Bosch’s "Garden of Earthly Delights". Though the medieval piece is submerged in religious meaning and depicts scenes from the bible, like Casu’s paintings, it is packed with unnatural landforms, fantastical architecture, and hybrid, sometimes-monstrous creatures. In Casu’s artworks an octopus uses it’s tentacles to play with a Rubik's cube, Little Red Riding Hood falls in love with The Wolf, and a mermaid, who in the Yoruba religion represents motherhood and is a protector of children, appears in the ocean.

Casu not only takes inspiration from, but also leaves his own mark on the territories he visits, often in the form of murals. In 2014 Casu completed “El vuelo de Pakal,” a mural in Tulum, Mexico. The work is one of 14 new murals that were painted on to the city walls as a part of the Tulum Art Project, an initiative organized by Tulum businesses and the local community to reenergize the city, draw the attention of local and international artists, and create a lively exchange between the community and the artists. The animated mural, which took 13 days to complete, is located across the street from the Mayan Church and depicts a scene reminiscent of those painted on the ancient Mayan ceramic drinking vessels, revealing stories of the Mayan creation, portraits of mythological deity, and creatures of the underworld. In Casu’s rendition, a Mayan figure dressed in the traditional garb flies a carriage or shuttle, which is being pulled by an exotic bird-like creature with a pointed beak nose. Their destination (it seems) is outer space, identified by the stars and constellations depicted on the wall.

Casu has also produced murals in Miami for Art Basel and in Costa Rica, and he says, “I want to fill up Sardinia before I die with ten to twelve huge murals.” 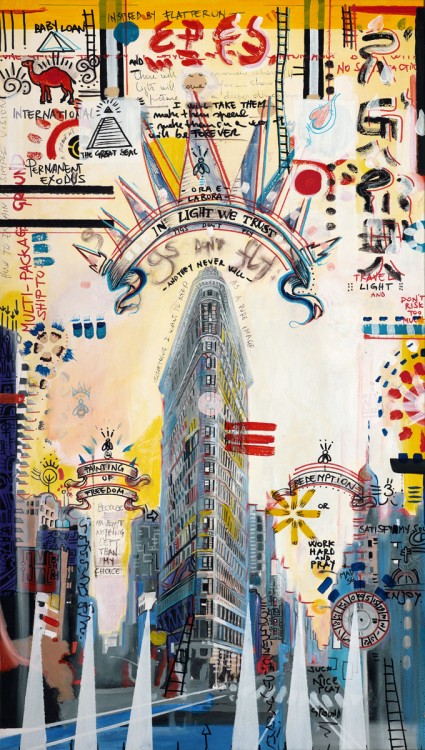 The practice of researching the history and culture of his environment is one that he applies to all the places he travels to, including New York. “I do it as a way of relating myself to the history of the place in which I am living,” he explained. When he moved from Australia to Manhattan 8 years ago, the shift from a flourishing natural environment to a concrete city wasn’t all that Casu had to adjust to. He also acclimated himself to a city with a more modern history. “In Australia I worked with a lot of Aboriginal artists, and in Thailand with a lot of Indonesian artists. There it was fascinating how I could translate the ethnic research that people had been producing for thousands of years [into my artwork]. Here in New York, it was what people like Basquiat and Warhol had been doing in the past hundred years,” he explained.

If there’s one thing that Casu loves about being an artist in New York it’s that one’s success is dictated first and foremost by his talent, and not by who he knows. “Here, people like your painting, they like what you do, they don’t care who your father is.” He was comparing his experience in New York to that of being an artist painting and exhibiting his work in Italy. “Make sure you’re kind, make friends… I hate that. If he likes your work great, if he doesn’t I don’t give a damn,” he said.

Though he still considers himself a starving artist, since his arrival in New York City, Casu has enjoyed several moments of recognition: a lucrative event with Amazon in which they bought 500 of his paintings, his mural at Art Basel, a billboard with his artwork in Times Square, an exhibition with The New York Times, and a show at the White House in 2010 based on a winning portrait he made of President Obama. 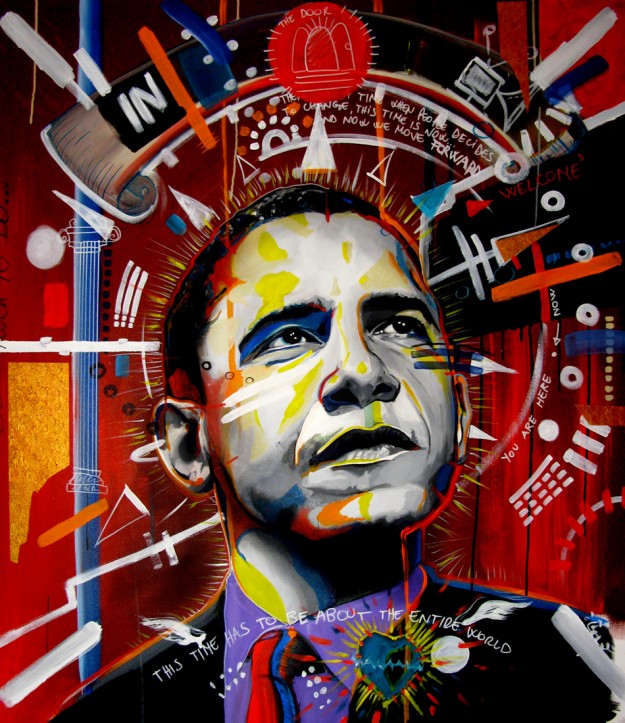 That last show, while it was great for publicity and recognition, is one he’d rather not focus on. “Obama was the biggest name in the world, but the production of my work is not about that,” he insists. The exhibition was organized to create funds for Haiti after the earthquake. They sought the artist who could paint the best portrait of Obama. The curator traveled to Casu’s studio a week before the exhibition and asked him to participate. “When the exhibition finished, the van that took the painting from Washington to New York was in a big accident. Everyone was in the hospital for four to five days. The van was demolished. I thought I lost the painting forever,” he said. Luckily, everyone was okay, and the painting made it out intact, save for a few markings where it was crushed. After the show he was asked to donate the work to the White House’s permanent collection, but when they refused to give him a certificate confirming that the work was his, he declined the offer. “I still have the painting in my studio, I never showed it again. I was over it.”

These days, Casu is working on more exciting projects, the most recent being his solo exhibition at the Hueb store. Though it was only up for one week, “One Perfect Darkness” was a success. Set against the dark grey walls of the elegant store, amidst the glinting diamonds that delicately scintillated through the glass vitrines, Casu’s artwork really was presented in a ‘perfect darkness’.

When thinking of a name for the exhibition Casu says he thought about two things. The first was the creative process that an artist usually goes through. “When you’re in a subconscious perception of reality, you’re not thinking about reality, and metaphorically, the darkness is in your brain, and your mind starts producing creative ideas,” he explained. The second thing he thought of is a time of day. “’Perfect Darkness’ is a name that I give to the moment after dusk, and right before sunset when the light is perfect. The colors are completely saturated because there’s no reflection from the rays of the sun.” 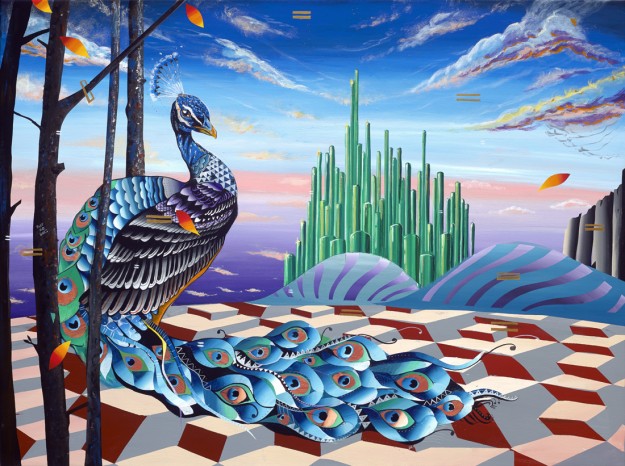 The exhibition featured some of Casu’s most hypnotic acrylic paintings including, “Marlene,” “Red Riding Hood,” and “DoDo,” as well as a collection of scarves, and a butterfly guitar on which his designs are printed. “I like to put art in everything that I see… shirts, watches, guitars, surfboards, scarves, dresses,” he remarked.

But perhaps the greatest hit of the night was a 3D experience created by Giulio Serafini, a multimedia designer and animator based in New York City. Visitors were invited to wear a pair of Goggles, in which was screened one of Casu’s paintings. With the Goggles on, they could virtually move through the whimsical setting of Casu’s imaginative work. “Everybody loved it so much we decided to do it better,” he says. Casu is now working on a project that will be presented in a multimedia based exhibition in New York this coming December, in which he is preparing 5 different masks, each with a different painting. “We want to create an exhibition that is about new ways of exploring art,” Casu said.

Also on view at the “One Perfect Darkness’ exhibition were Casu’s elephant eggs, which seem to best represent the message that is at the core of all of his artwork. The elephant is a symbol of the Indian god Ganesha, and it represents knowledge, travel, and discovery. Casu started creating a series of 20 eggs for his 2014 New York City show titled ‘Magical Realism’. He explains, “Elephants obviously don’t lay eggs, so the fact that I was creating the eggs and calling them elephant eggs makes the impossible possible, and makes the regular magical.”

Whether creating in South East Asia, New York, or Europe, on canvas, a brick wall, or through body painting, there is an underlying message that resonates through all of Casu’s artwork: “You can create the magical, and make the unexpected real.”