Alberto Burri: The Trauma of Painting, the first comprehensive exhibition dedicated to this influential Italian artist in the States since 1977, opened October 9th at the Guggenheim. His torn, tattered, burned, pierced, and stitched canvases are characterized by an unmistakable sense of brokenness and destruction that evokes the trauma that the artist witnessed as a protagonist in the war

Alberto Burri: The Trauma of Painting, the first comprehensive exhibition dedicated to this influential Italian artist in the United States since 1977, is on view at the Guggenheim until January 6th, 2016. As the president of the Fondazione Palazzo Albizzini Collezione Burri, Bruno Corà, stated at Thursday’s press preview, “[I will say] two words for Burri, but only two, because the artwork speaks for itself. I would like to recognize how radical his choices were in a moment when his choices were unthinkable.”

Alberto Burri (1915 – 1995) became an artist via rather unconventional means. He was originally trained as a doctor in his hometown of Città di Castello, Italy. During World War II he joined the Italian army, serving as a medic in North Africa until his unit was captured in 1943. It wasn’t until he was held as a prisoner of war in a camp in Hereford, Texas that the doctor discovered his artistic talents, which would reinvent painting in the 20th century.

In some of his works Burri combines his medical background with his artistic vision, creating compositions such as Lo Strappo that somewhat gruesomely evoke the sense of torn and flayed human skin being stitched together. 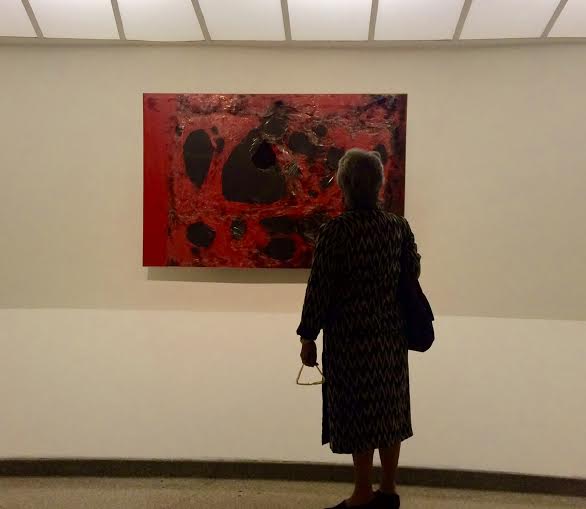 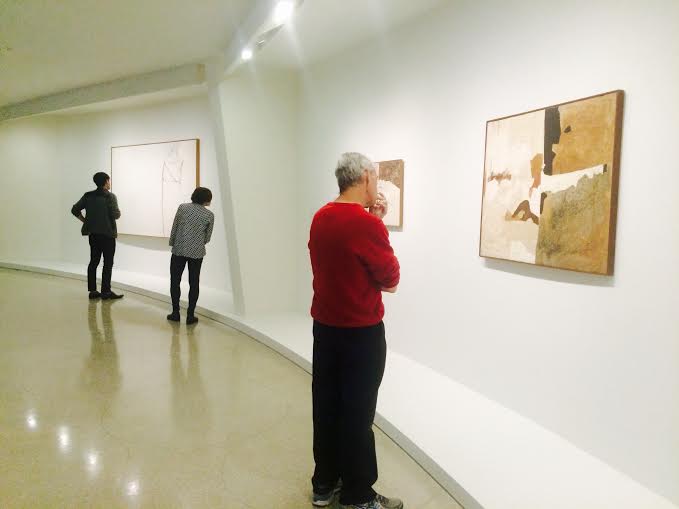 As the title of the exhibition suggests, Burri’s torn, tattered, burned, pierced, melted and stitched canvases are characterized by an unmistakable sense of angst, loss, brokenness, and destruction. “Burri’s work is a reaction to the shame and devastation in Italy [during World War II],” stated guest curator Emily Braun at the press preview. It is as if he inflicted the trauma that he witnessed as a protagonist in the war onto his paintings, which in reality don’t involve much use of “paint” at all. Burri instead used cheap materials prominently found in the war including torn and stained rags, fragmented wood veneers, welded steel sheets, melted plastic, and his infamous burlap sacks to create his unparalleled, complex compositions of varying colors and textures.

In order to place Burri’s work in a historical context, the exhibition begins with an Italian newsreel film showing the bombardment of Italian cities. “A large part of the American public has forgotten the history of World War II,” said Braun. The exhibition is then organized chronologically, allowing the viewer to circle the rotunda and experience Burri’s oeuvre, from the Gobbi of his early years to the to the Cretti and Cellotex works he created towards the end of his career. The artworks are grouped according to the series in which they were created. Burri not only departed from the traditional conventions of painting in his use and breakdown of utilitarian materials, but also in the way he titled his compositions. Rather than have the titles of the works reflect their subject matter, he titled them according to the materials, colors, and processes that he employed: Sacchi (sacks), Catrami (tars), Muffe (molds), Gobbi (hunchbacks), Bianchi (white monochromes), Legni (wood combustions), Ferri (irons), Combustioni plastiche (melted plastic sheeting), Cretti (induce cracking), and Cellotex (peeled fiberboard). 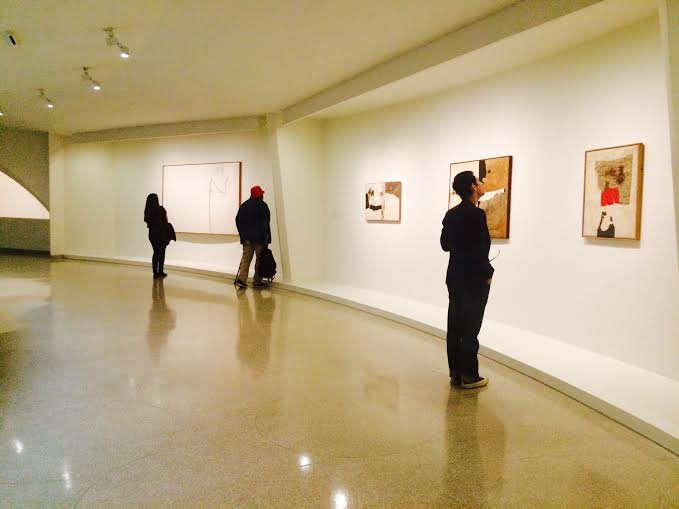 As the viewers near the top of the rotunda, they find a second film installation. This time it is a film by Dutch filmmaker Petra Noordkamp. It takes the viewer through Burri’s monumental land art memorial, Grande cretto, completed after his death, in Gibellina, Sicily in 2014. The memorial commemorates the earthquake of 1968 that destroyed the small city. Large blocks covered in white cement form a winding pathway. While immersed in the installation the viewer feels as if they are meandering through a maze. The only thing visible to the viewer is the pathway ahead, and the solid walls rising on either side. An aerial view reveals that the installation very much resembles a life-size version of Burri’s Grande bianco cretto canvas, which evokes a mass of land shattered and cracked into pieces.

The Burri show is brought to the Guggenheim with the support of Lavazza. In the press release statement Francesca Lavazza stated, “From the ashes of World War II, Alberto Burri overcame defeat and suffering through iron will, determination and originality, using materials like burlap sacks and charred wood, to lead a new generation of Italian artists… Burri's at once jarring and riveting pieces will permit us to rediscover another tumultuous period of Italian contemporary history, and the thrust of his influence on the art world on both sides of the Atlantic.”