From mechanized metal humanoids to organic inflatable forms Chico MacMurtrie’s robots challenge viewers to think about human motion and the cycle of life. The Robotic Church performance returns for its third season from October 9th – 11th in Red Hook, Brooklyn. / Leggi in italiano

The town was Red Hook, Brooklyn. The church was built in the 1880’s by Norwegian sailors. The wedding was one like you’ve never seen before. Chico MacMurtrie and his wife, Luise, were married in 2012. The protestant pastor, Luise’s uncle, dressed in a beautiful gown and delivered the sermon (consisting entirely of poems) from beneath a makeshift arch created for the intimate occasion. Family members witnessed the joyous event from the wooden pews set up in the church’s nave. Surrounding them, and standing in the vestibules typically occupied by statues of saints, were the guests of honor: Urge to Stand, Drumming and Drawing Subhuman, String Body, Transparent Man, Bellboy, and Rope Climber. Hissing, humming, whizzing, shrilling, thumping, these skeletal, grotesque, yet endearing characters assisted the pastor in delivering the sermon, and provided the musical entertainment for the evening. They were MacMurtrie’s robots.

Chico MacMurtrie, originally born in New Mexico, has been making robots since the 1980’s. He holds a B.F.A. from the University of Arizona and an M.F.A. from the University of California at Los Angeles. In 1992 he formed Amorphic Robot Works, a San Francisco-based group of artists, engineers and technicians who join forces to create robotic performances and installations. 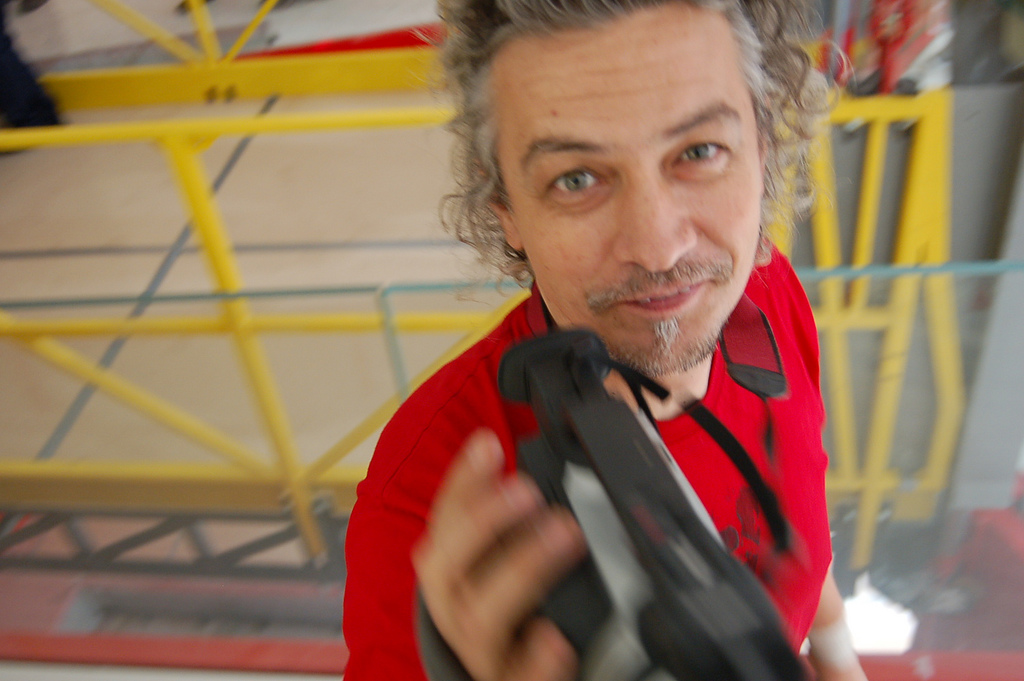 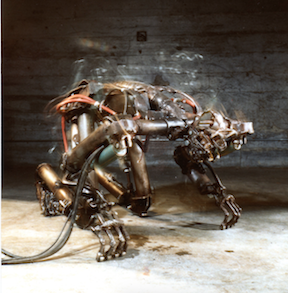 The year 2000 marked a momentous change in MacMutrie’s artistic career. He remembers it as the year he turned forty, the year his mother passed away, and the year he made the life changing move from San Francisco to New York. “Prices of real estate doubled [in San Francisco]. I was moving out of my studio there and figured I could live in New York for that price,” he explains. However, he would soon discover that finding a suitable space for him to create his large-scale artworks in New York would be a bigger challenge than he had anticipated. He made the move to the East Coast with what he thought was enough money to buy his own space, when in reality it was only enough to live on for a year. “The reality of the first year in New York was really, really hard. It’s a very tough place and if you don’t have a reason to be here, it’s really hard to stay. You have to have a reason or [the city] eats you alive,” he says.

At first, he uncomfortably settled into a less than ideal warehouse space, crowded with another person’s belongings. But then, as if it were a gift sent from God, he found the church. It’s the church in which he would marry his wife, the church that would become his workshop, and serve as home to over 35 of his robots.

The wedding marked the first time in six years that his robots had been brought back to life. In 2000 MacMurtrie was commissioned to do a show with these metal humanoids, and so he created an organic environment for them to live in. It was called the Amorphic Landscape and it toured Europe until the year 2006, when the robots were put in a storage facility. “When I set up The Robotic Church for the wedding, the idea was that it would inaugurate the robots. They could become saints, in essence. All of them went under the knife and were restored, but they look exactly how they did in their previous incarnation,” explained MacMurtrie. 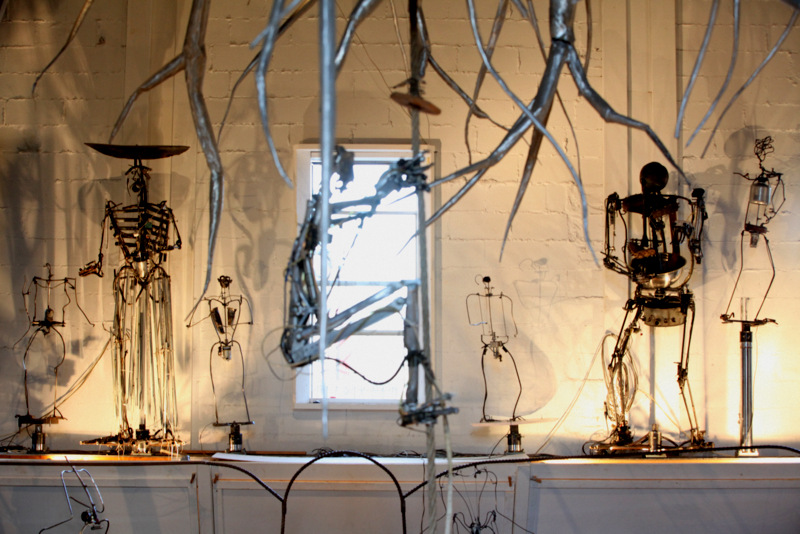 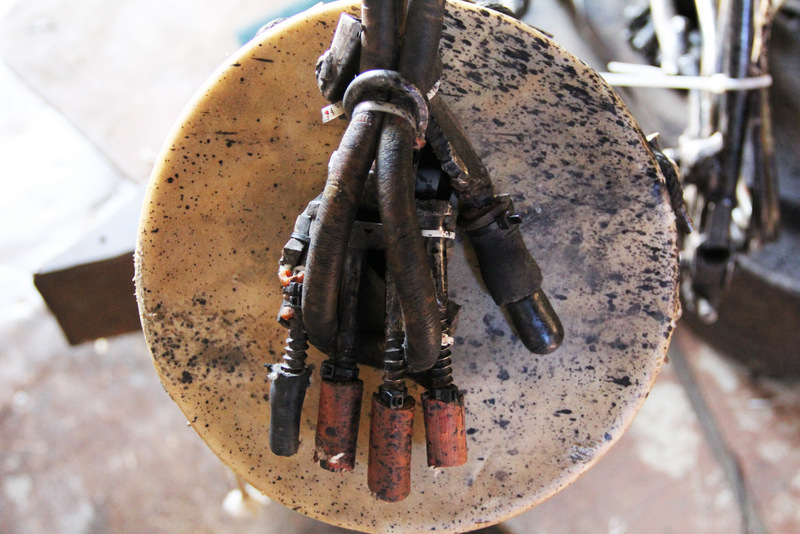 From October 9th to 11th The Robotic Church performance, organized in conjunction with Atlas Obscura, will be returning for its third season. MacMurtrie presents his audience with an eerie, uniquely immersive experience in which humanoid robots, ranging from 12 inches to 15 feet, are programmed to orchestrate a musical performance. One robot playfully tumbles across the floor, another thumps on his drums, and yet another shimmies his way up a rope to the ceiling. The electrifying performance sends the visitor’s visual and auditory senses into a temporary state of disarray. Each movement sends a consequential screech, clank, and thump into the air, filling the space with a dizzying cacophony of sounds, and offering the viewer something unusual to feast his or her eyes on.

The robots aren’t only there to make noise, however. Each is embedded with its own personality and meaning, some humorous, while others are more serious. Urge to Stand, for instance, opens the performance by standing on a welded Earth. “His main objective is to stand up each day. Urge is about the equality of mankind,” explains MacMurtrie. In order to represent this idea he divided the robot straight down the middle, one half represents the male side, and the other the female. 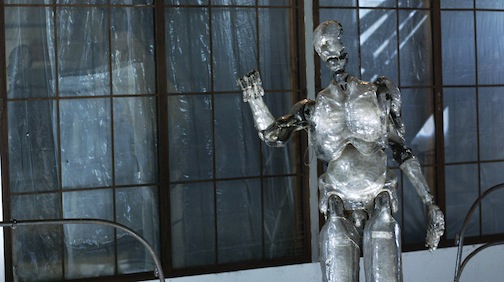 So how did MacMurtrie start making robots? It extends back to his days of doing performance art in graduate school. In his performances he would paint his body with a material that would eventually harden and then shed, the way a snake shed its skin. “When the skin came off me it was like it transformed into its own figure and I thought, ‘This has life in it passed, the life that I gave it,’” he said. The skin itself became the performer. MacMurtrie turned it into a puppet by adding structure to it. He then created a harness for the puppet and held devices that allowed him to move the puppets limbs or shake his head, echoing human motion.

MacMurtrie pushed his work to reach new heights through Tumbling Man. He developed a telemetry suit that allowed him to let go of the harness. Like a mirror images, now the artist and machine moved independently, but in unison. “[The suit] was padded so I could summersault on the concrete, and [the robot] could mimic my movement, and summersault as well,” he explained.

Finally, the artist removed himself from the performance and started using computer technology to animate the puppets. When he embarked on this new project in the late 1980’s computers were not yet user friendly, and so he had to hire software engineers. They would hack used (because they couldn’t afford new) computers to find a way to get the machines to function. “The era of robotics has undergone quite a change,” said MacMurtrie. “In the 80’s you were innovative, today it’s commonplace. These days computing is so user friendly that you can go online and order the Arduino and animate your home. You can program your kitchen to make breakfast for you now!”

The metal robots continue to astound audiences through the somewhat disorienting Robotic Church performances, but these days, MacMurtrie has been working with a different kind of robot. The new machines, made of plastic and a high-tensile fabric, are much larger, and softer compared to their metal humanoid cousins.

Though he has lived in New York for fifteen years, MacMurtrie hasn’t forgotten his roots. It is made evident in one of his latest projects, The Border Crossing. The work consists of a tower that, when inflated, reaches soaring heights, and then ideally bends over the Mexican border, where MacMurtrie grew up. “When I was in grade school the children would come through the fence. Then, it was a chain-link fence, made of wire. Now it’s a fortified border. These kids would come across the border to go to school and learn English. It was positive and cool. Now those kids have to illegally cross to work, yet they contribute to our economy, so isn’t that really interesting,” he pondered. The project is still in the fundraising stages, but his goal is to produce it not only on the border of Mexico, but also on various borders across Europe. “This issue exists throughout the world, the notion of border and where people belong and don’t belong. In the end it’s so fascinating where we’re genetically from. We all come from the same place. Putting up the wall is so negative,” he said. 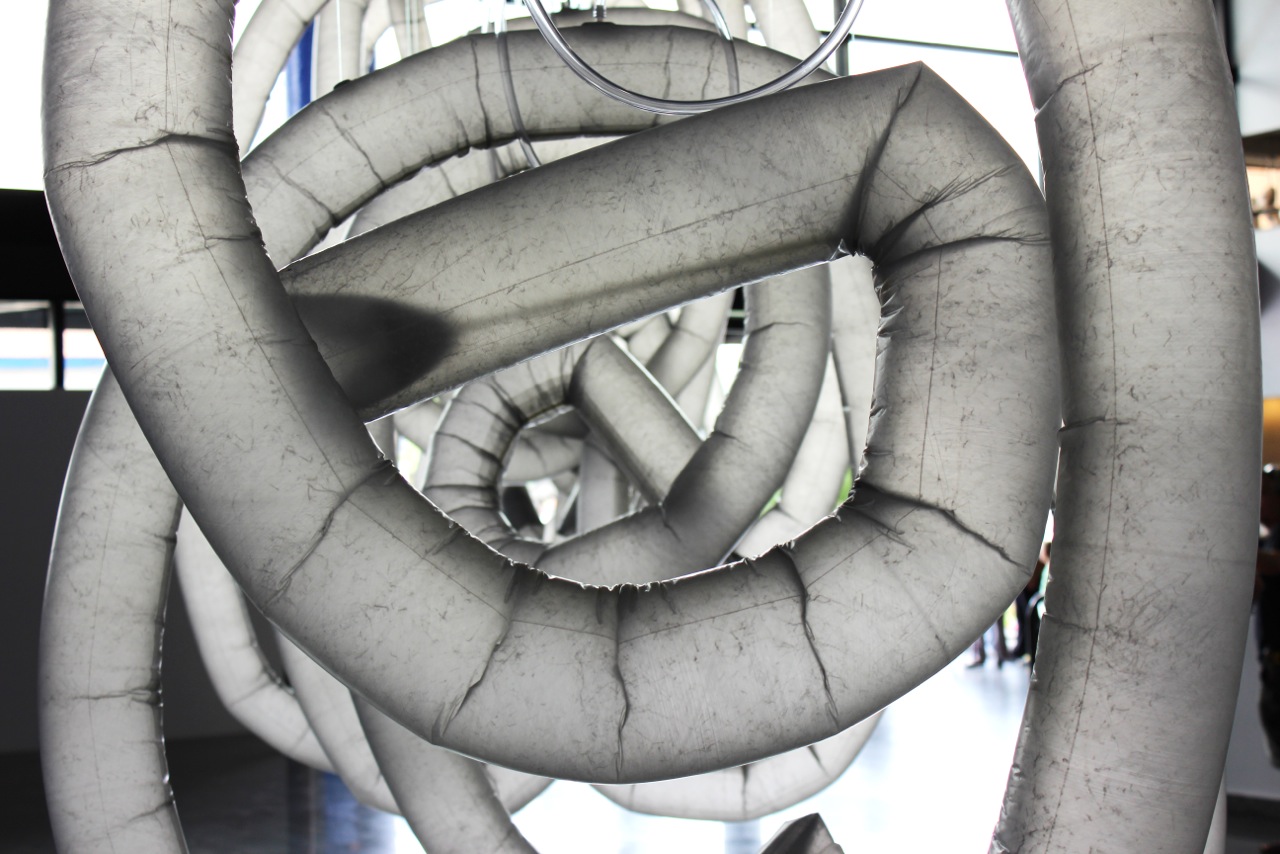 Organic Arches. Some of these new works by Chico are on view at Pioneer Works

MacMurtrie is currently creating another inflatable robot. One half of its body has already been completed; the other half is currently being manufactured in the church’s workshop with the help of his assistant, Zia. The idea is to eventually inject the robot with air and then watch it walk off into the environment until it runs out of energy and finds another place to dock. “In the simplest way, it’s about the cycle of life and the importance of the air that we breathe. It’s a sculpture that exists only by the cooperation of the environment. In this case, it’s a metaphorical, man-made environment that says something about what we as humans need to keep subsisting on our planet,” explains MacMurtrie

Nature plays a significant role not only in MacMurtrie’s artwork, but also in his overall perception of the world. The symbolism found in his artwork resounds, not only through the squeaking movements of his mechanized metal robots, and the breaths of air gusting from his inflatable sculptures, but in The Robotic Church itself. Though it is no longer used for mass, there is a spiritual presence that is impossible to ignore upon walking into the rundown space. “[The church] is full of religious references, but it’s not about a specific denomination. It’s about the almighty,” says MacMurtrie, as he points one finger towards the ceiling. Hanging upside-down and directly overhead is a large metallic tree. Its pointed branches slowly, yet forebodingly reach out in all directions, as if in search of something to grasp on to. “Ultimately, that is the symbol. Nature is the almighty. God is our world.”