Roberto Almagno’s sculptural work is on view at the Casa Italiana Zerilli Marimò from October 28th – December 16th, 2015. Using a secret technique, his wooden installations seem to float in space, defying the laws of gravity. / Leggi in italiano

Roman sculptor Roberto Almagno doesn’t own a telephone, or a computer. He is very much a man of nature. You might not realize it at first glance, but through his new exhibition, on view at the Casa Italiana Zerilli Marimò from October 28th – December 16th, he has brought a piece of his beloved woodlands to the concrete setting of New York City. What looks like iron to the naked eye, is actually wood. It has been so wholly warped and transformed from its natural form that it appears as unrecognizable in Almagno’s installations, which seem to buoyantly float from the white walls of the gallery, and fluidly soar through empty space.

Almagno has worked with clay, plaster, and stone, but when he discovered wood in the early 80’s, it would define his artistic career. “Wood is a very noble material, poor, but noble. And it’s very alive,” he tells La Voce. His unique process involves the practice of a very ancient technique in which he flays the wood, immerses it in water, burns it with fire, and slowly bends it until it reaches the desired curvature. 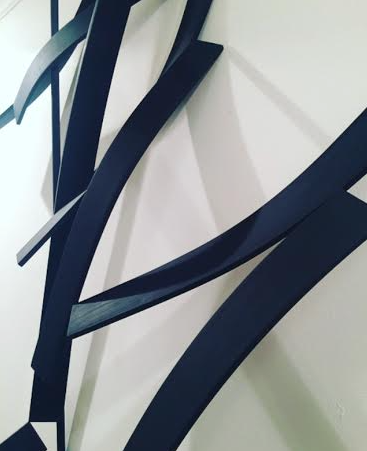 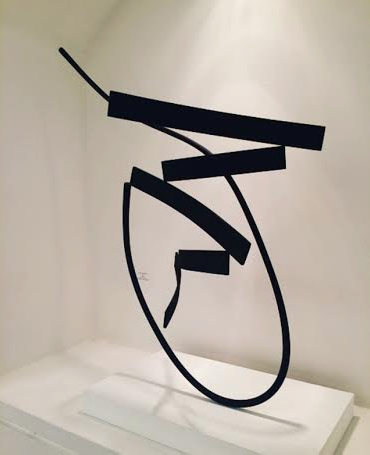 The most curious aspect of his sculptural work is the way that it so effortlessly hovers in space, as if freed from gravity. Using a secret technique which the artist does not wish to reveal, he physically connects the elements of his installation in such a subtle way that they seem to elegantly, weightlessly, mystically lift from the ground and gracefully float above and around one another. 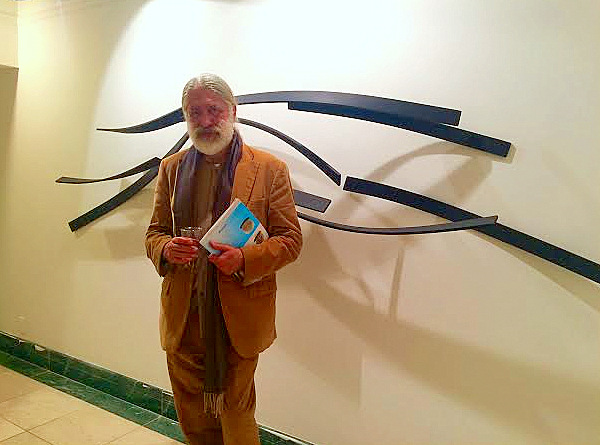 “It’s a very laborious art, but I don’t think about time. I always try to arrive at the conclusion of a sculpture with the same freshness and initial sense of joy and wonder,” he says. It speaks to his artisanal skills that he can achieve the flawlessly smooth, curvilinear forms of his sculptures by only using his hands. Almagno views his relationship with his materials as a personal one and therefore refuses to utilize technology, or assistance from others when creating his work. “It is a sculpture that is born from me and only me. From the beginning when I collect the wood, until the point of installation, everything is done with my own hands. If someone assists me, I don’t feel like it is mine anymore. I have to feel like it’s mine.”

Despite the fact that his art depends so heavily on the use of wood, Almagno has never cut down a tree branch. “I swear, never,” he insists. He lives at the center of the city Rome but when he feels the need to escape the chaos of an urban environment, he retreats into the woods. “I like to meditate, hear the silence of nature. It’s very emotional for me. I search for branches that have fallen to the ground, bring them to my studio, leave them there, and wait for them to call me. I always hear them call,” he says.

Watch the video about Almagno's show by Casa Italiana NYU>>