Opens November 6th in New York a new documentary about Peggy Guggenheim by filmmaker Lisa Immordino Vreeland. An insider’s look behind the money, the glamour and the travel, it indtroduces us to one of the most famous art collectors of her times and a woman who, by her own admission, led a crazy life. / Leggi in italiano

When I heard about the new documentary about Peggy Guggenheim, my ears immediately perked up. For the past 25 years, I have lived 2 miles from the Pollock Krasner House on Long Island, and just over a mile from the Green River Cemetery, where Jackson Pollock is buried. Pollock received his first art commission from Peggy Guggenheim in 1943; and then a loan from her so he could buy a home in the Springs. That support allowed his artwork to grow and flourish. That much I knew about Peggy, the legendary art collector and heiress.

What I didn’t know was how many other artists and writers she bed, wed, and helped establish and whose work she brought to fame. 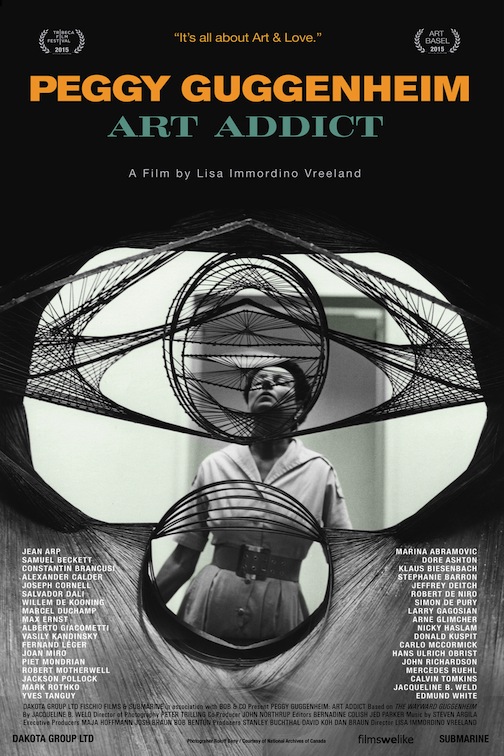 Filmmaker Lisa Immordino Vreeland brings those relationships to life through the art itself, old footage, on-camera bites and Jacqueline Bogard Weld’s long lost audio interviews with Peggy from her book, Peggy: The Wayward Guggenheim. Along the way, we meet Marcel Duchamp, Robert Motherwell, Chuck Close, Lucien Freud, Yves Tanguy, Henry Moore, Salvador Dali, Giacometti, Max Ernst, Man Ray and Picasso. We get a glimpse into Peggy’s perilous efforts to rescue art from Nazi-occupied Paris during WWII. And we see how her passion for the work itself helped shape and define modern art as we know it. Her friends tell more personal parts of her story, while art historians, gallery owners, and museum directors talk about her legacy.

We also get an insider’s look behind the money, the glamour and the travel. There was great sadness in her life, including the early death of her father on the Titanic, the loss of her sister in her 20’s; her husband’s brutality; and the loss of her daughter. Art came to fill the void and give her life purpose.

And that sense of purpose gave rise to an incredible assortment of collections: the Guggenheim Jeune in London (1938); The Art of This Century Gallery (NYC, 1942); and of course, the magnificent Peggy Guggenheim Collection in Venice at her Palazzo Venier dei Leoni (1951). It was what Peggy called her second greatest achievement after discovering Jackson Pollock. To quote Director Vreeland, “She always had in mind creating a collection that people could see. And this was her idea of being able to give back to others.”

From a filmmaking standpoint, there is some glorious stuff here. The opening minutes cleverly combine production credits with visual homage to the artists. Old footage is used to great effect giving us a look at life as it was lived by the upper classes in NYC, as well as the bohemian life of Paris in the 20’s. The period music guides us seamlessly from one decade to next. In fact, the only sticking point for me is the disembodied voice of Jacqueline Weld interviewing Guggenheim. It is difficult to hear at best.

Peggy Guggenheim’s life was a long and complex one. A colorful and eccentric character, she was clearly ahead of her time, “grabbing hold of life and living it on her own terms”. Yet, people still seem to want to debate her impact on the art world. Did she really pave the way for art to move from surrealism to abstract expressionism? Did she really have innate taste or a flair for art or was she simply in the right place at the right time? Was she a rebel or was she a lonely rich girl looking for attention?

By her own admission, she led a crazy life. But as she liked to say, “It was all about art and love”. And, as this film clearly shows, we are all the better for it.