Emilio Perez is a Brooklyn-based Cuban-American artist who makes paintings, and then slices into them, creating unconventional, abstract vortexes of moving color that invite you to lose yourself. He talks about his love for the ocean, his Cuban heritage, and his need to always live in the moment. / Leggi in italiano

For Cuban-American artist Emilio Perez, his painting process is a lot like wading in the ocean. “I’m at a beach and I see a wave that’s about to break. That wave has been traveling all these miles and was caused by a storm that’s half way around the world,” he marvels. It’s the same when he paints. Just as that wave, caused by forces from the past, crashes onto the shore, when he’s painting, events that occurred even before Perez was born, his Cuban heritage, h­is love of Latin music, and his need to always live in the moment subconsciously spill out onto his canvases.

When he’s in the ocean his body instinctively responds to the pushing and pulling of the currents, just as when he’s “drawing,” or cutting, into his paintings his hand is intuitively responding to the ebb and flow of the composition. “I like to be spontaneous, and let forces guide me in life. There’s this purity in existing in the now that I try to capture when I’m painting,” he explains. 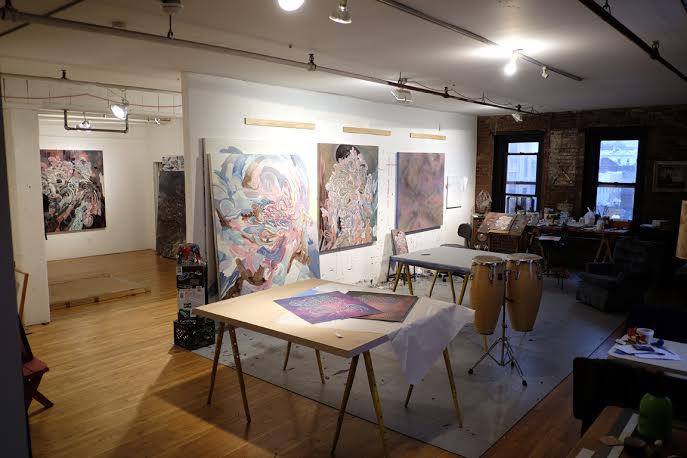 Large-scale canvases cover the walls of Perez’s studio in Bushwick, Brooklyn. Take one look at the dramatic vortexes that fill them and you will find yourself lost in the swirls of moving color that vigorously whirl through them. You might see a storm cloud, a blossoming rose, an apocalypse… or is it a rushing whirlpool? That’s the beauty of his abstract artwork, it encourages everyone to experience it a bit differently, and discover new pictures and emotions within it that they hadn’t seen or felt before. “It’s like when you’re looking at a cloud, it moves and you start seeing different things. Some people will try to find recognizable things within them, others will lose themselves,” he says.

Perez’s parents moved from a crumbling Cuba to the United States in the 1960’s “and swore to never go back,” says the artist. For a brief period he lived in Brazil, but he grew up in Miami, and finally moved to New York in 1998, where he has lived and painted for the past 17 years. Perez attended Pratt Institute and University of Florida's New World School of the Arts. “I knew a lot of people involved in the arts in Miami, but over time I realized that if I wanted to make a serious go at it I had to move to New York,” he explains. When he first touched ground here he started working as an art handler, mounting installations for various galleries. All the while he had his own studio and when he had time, continued creating his own art. Today he works as a full-time artist who has exhibited his work in Paris, Italy, New York, Cuba, Miami, Chicago, and Texas. But despite the fact that he has achieved recognition for his artwork, his life as an artist hasn’t gotten any easier. After spending 15 years of his life only doing one thing, he needs figure out how to make it last a lifetime. “It’s naïve to think that the hustle will ever end,” he says. “Now the stakes are way higher. The goal now is, how do you maintain this momentum and keep this thing going. You have to believe in your work and in your skills because it’s the only constant.” 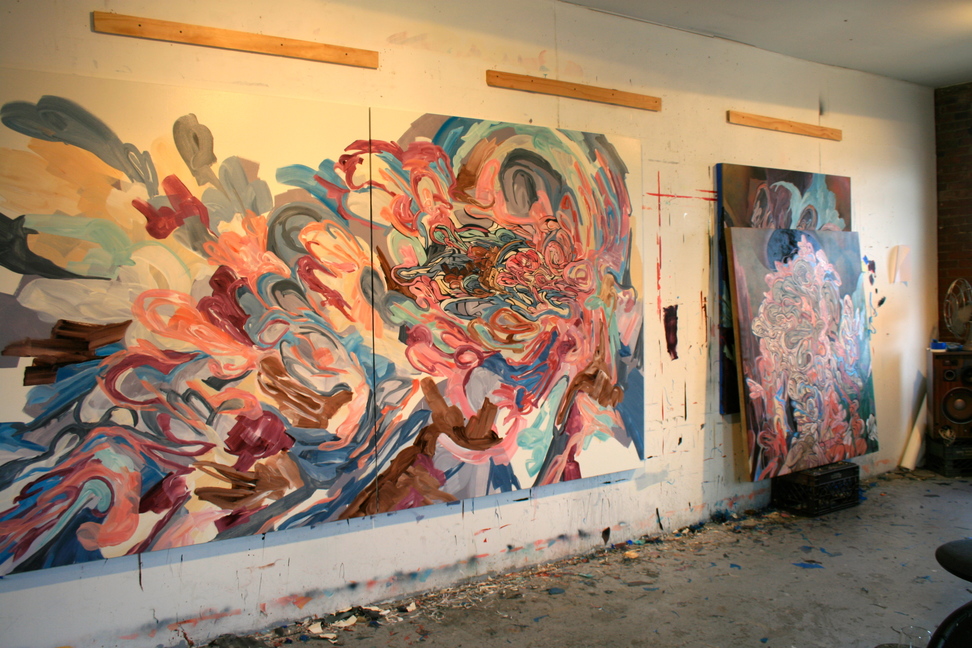 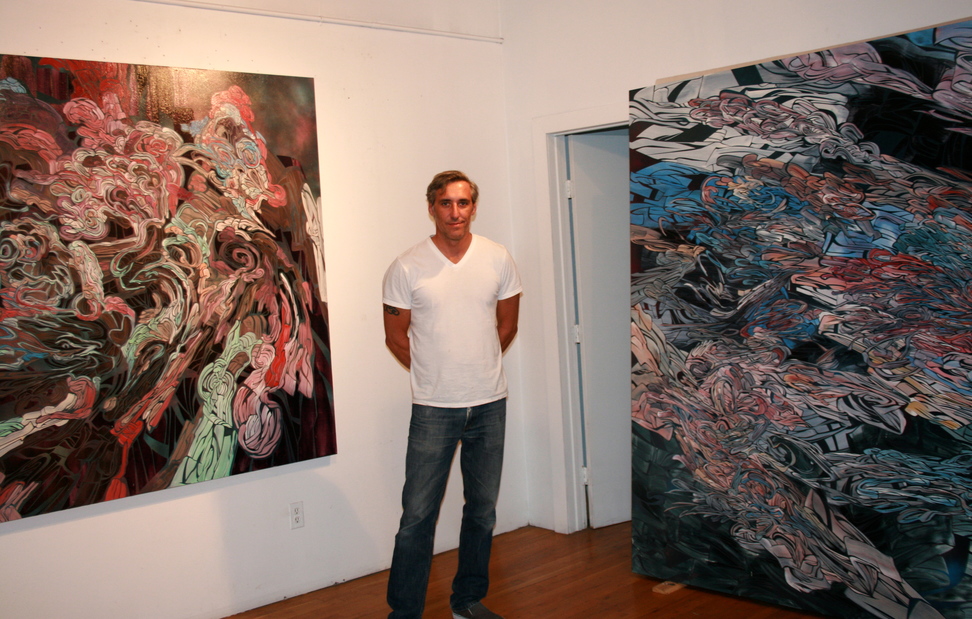 His unique paintings are created using an additive, and then subtractive technique. First, he preps his blank canvas, a process that consists of covering a wood panel with an atmospheric background made from sprayed enamel paint. He then adds a second, dense layer of latex paint. Now the canvas is ready, and it’s as if his hand has a mind of its own when it begins to paint very loose strokes of pink, blue, green. “I get into a trancelike state. I’m in another place, and it’s not my mind, but my hand that is making all the decisions,” he explains. After he (impatiently) waits for the paint to dry he “draws”, or slices into it with an X-ACTO knife, peeling off the top layer to reveal the atmospheric background underneath. “I use the painting as a road map for what I’m going to cut and peel. The drawing is reacting to the painting.”

Perez compares the dialogue between these two artistic forms, painting and drawing, to playing music. “There are two musicians jamming, right? One person is playing off the other and you don’t know what you’re going to play a few seconds down the line because it’s all happening in the moment,” he says. The fluid, upbeat, romantic rhythm of Latin music has a particularly strong influence on his paintings (that explains the drum set and vintage jukebox sitting by the window). Just as your hips naturally sway to the Mambo, Perez wants your eyes to unconsciously move across his paintings, and get lost in the endless cuts and layers. “I want it to inspire their imagination,” he says.

But his tie to his Latin heritage reaches far deeper than just his interest in the music. When his parents left Cuba in the 60’s they made the resolute decision to never return. Fifteen years ago the artist decided to form his own opinion of where he comes from. “When I visited Cuba for the first time, I was going to a place that existed purely in my imagination and in the stories of others. I got there and thought, ‘This is home.’ There was nothing about it that seemed strange or foreign to me,” he says.

Last summer he was asked to participate in the 12th Havana Biennale, which took place at the end of May 2015. The exhibition was titled Detras del Muro II (Behind the Wall II). It unfolded on Havana’s Malecón, the 8-kilometer sea wall that protects Havana from the water, and ultimately separates Cuba from the rest of the world. It’s also “the most romantic place on the planet,” recalls Perez. “Most of what’s behind the wall is falling apart. I saw some of the most dilapidated, ruined buildings of the city there. At night, all those people go to the Malecón. It’s like the living room of Havana.” Passionate lovers, poor fishermen, and Cubans of all ages gather along the seawall to gossip, drink rum, kiss, play music, dance, and forget their troubles.

It was a commission that struck a cord particularly close to the artist’s heart for several reasons. “[When they escaped Cuba], my parents left everything behind. I thought it would be fitting for me to make a piece that I will leave behind for the people that are there,” he says. And so, in just three weeks he painted, sliced, and peeled, until he created a 65-foot long painting titled Un Verso Sencillo (A Simple Verse), a name that was inspired by José Martí’s last book of essays. Martí is not only the father of Cuban independence from Spain, and therefore beloved by the Cubans, but he was also banished by the Spanish and spent most of his exile in America, like Perez’s parents.

His impulsivity makes it impossible for Perez to know exactly what any of his artwork will look like until it is complete. Nevertheless, he put a lot of thought into the colors and materials he should use in order to communicate a certain message. For starters, he used pastel colors that reflected the fading paints of Havana and then, he says, “I made it on shitty plywood. The idea was that with the rain and the salt coming from the ocean, it would deteriorate. I wanted it to deteriorate like the rest of Havana. It’s this beautiful place, but it’s also really tragic.” His compositions may vary in size and in their color schemes, but if there’s one characteristic that remains constant in all of them it’s the undeniable sense of intense movement that they evoke. In the end, A Simple Verse rolled down that stretch of road, where the instrumental political manifestations, parades, and carnivals of Cuba historically unfolded.

When Perez returns to the ocean, he returns to where he’s from. It’s a place where he can clear his mind and surrender his body to the tug and pull of the waves, but it’s also more than that. When he’s in the water, he’s physically connected to his roots, his home. So it was particularly moving for Perez to have created a mural that looks out towards the ocean. “I don’t think that there was ever a day that I was out on the water and didn’t think about [Cuba]. All of the molecules of the water I was in eventually touch its beaches,” he says.