The Luberon region of Provence has a few precious holiday traditions that include special food and Santons on the table. The garlic soup with potatoes, the wild boar, and the many desserts, pair well with their friendly wines. But what makes the meal a magical Christmas Dinner are the tiny figurines representing the nativity scene / Leggi in Italiano

Christmas is celebrated by many around the world. I have even been greeted with Christmas cheer when traveling in Thailand. It may have religious meaning to some and no religious significance to others, but it seems to inspire many to want to reconnect with the magic they felt as children. Last week I had a beautiful Christmas dinner at Boulud Sud, near Lincoln Center in Manhattan. It was a Luberon dinner, showing wines from the area that has a few precious holiday traditions of its own.

Luberon is in the Southeastern part of France in the Rhône Valley, which is somewhat near the border of Italy, and very near to Aix-en-Provence. The south of France has a different feeling than the rest of the country – it seems the people laugh louder, speak slower, and embrace foreigners with an open heart, as long as they enjoy food and wine. It is a stunning place that has the quintessential picturesque landscape of lavender fields and mountains in the background. A Luberon Christmas dinner consists of special foods, such as Aigo Boulido (garlic soup with potatoes), wild boar, and the thirteen desserts, all pairing well with their friendly wines; but what made the meal magical was seeing Santons on the table. 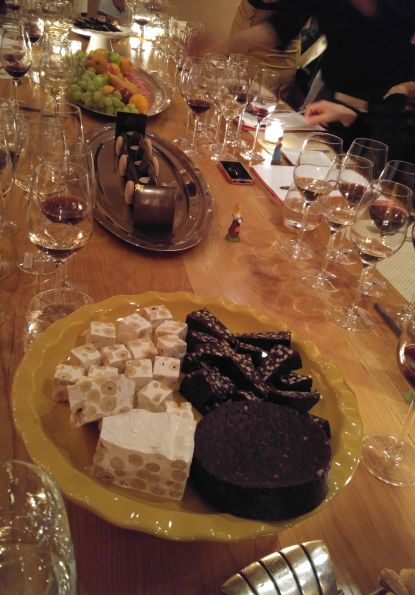 The thirteen desserts during Luberon Dinner

Santons are tiny figurines that came into popularity when public nativity scenes were banned during the French Revolution, and so the making of Les Santons to resemble the nativity scene as tiny figures gave French people the chance to have the Holy Family represented in their home. In Luberon, figurines are not only made of religious figures but they also represent real people from local village life. Every year there is an announcement of who gets the honor of having a Santon made in their image. This remarkable tradition helps the local villagers feel as if they are a part of the Christmas story.

When I talked to producers from the area, they said that younger people in Luberon did not necessarily celebrate the religious aspect of Christmas, but that the figurines were still part of the magic of the holiday. And even though I am not from Luberon, I am an American living in the hustle and the bustle of New York City, I found that these little replicas of the village characters living in Luberon brought some Christmas magic into my life as well.

I think about how much money and energy we spend in trying to make this time of year magical and special, many times to no avail. And something that is so simple, such as the little boulanger “baker” figurine I was given that night, can bring so much joy – and it reminded me that magic cannot be bought or forced, it happens when we least expect it and either we are open to the experience or we are not.

2012 Notre Dame de Cousignac Rouge, Luberon, France ($13): A red blend with 60% Grenache, 25% Syrah and 15% Mourvèdre. A great value red that offers lots of black and red fruit with hints of rosemary all wrapped up in a round body that makes it all too easy to drink too many glasses.

2014 Château la Canorgue Blanc Blanc, Luberon, France ($20): A white blend with 25% Clairette, 25% Bourboulenc, 25% Rousanne and 25% Marsanne. Lemon zest and golden apple with a touch of spice. A white wine that delivers richness while having a lovely distinctive minerality.

2001 Clos des Papes Rouge, Châteauneuf-du-Pape, Rhône Valley, France ($115): A red blend with 65% Grenache, 20% Mourvedre, 10% Syrah, and 5% Counoise. This wine is not from the Luberon but is from the great appellation called Châteauneuf-du-Pape which is part of the same region, Rhône Valley. A decadent wine that is lush and elegant at the same time. It has reached a great stage in its life with the oak and tannins completely integrated.