The United Nations Security Council, in a unanimous vote, approved Resolution 2259, the resolution to end the conflict in Libya. This resolution opens up the possibility of a legitimate intervention by foreign countries - like Great Britain and Italy - if the new Libyan Government will need help to contain ISIS

After months of political debates, the massive conflict in Libya has reached a turning point. On Dec 23rd, the United Nations Security Council, in a unanimous vote, approved Resolution 2259, the resolution to end the conflict in Libya. The resolution was created by the combined efforts of the parties in conflict in Libya, as well as the Secretary-General’s special envoy to the region, Martin Kobler. The agreement urges all members to have enforced the agreement signed last week in Morocco and have the beginnings of the new Libyan government built within the next 30 days. This resolution will end a four-year-long crisis that has left nearly 2.4 million Libyans in desperate need of humanitarian aid.

Mr. Kobler stated the resolution is “a clear and unambiguous statement of support.” The agreement will form a Government of National Accord with a Presidency Council, Cabinet, House of Representatives and State Council in the country of Libya. The Security Council advised all Member States of the UN to “actively support the new Government in defeating ISIL, groups that have pledged allegiance to ISIL, Ansar Al Sharia, and all other individuals, groups, undertakings and entities associated with Al-Qaida operating in Libya, upon its request,” as well as supporting the country through humanitarian aid. The resolution addressed the state of humanitarian care in the country, and addressed the need for the participation of women to aid in the transition, resolution of the conflict, and building peace within Libya. 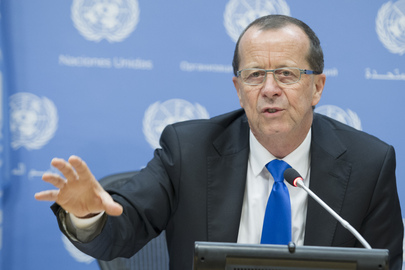 When the UN Security Council voted in support of the resolution, the representatives from the UK, Russia, France, Jordan, Spain, China, Venezuela, Nigeria, and Libya addressed the Security Council, both praising the new agreement, while also reinforcing how the resolution is only the beginning of the long process for the country. According to Martin Kobler, Secretary-General Special Representative, the resolution both “congratulates” the people of the country and the United Nation who have fought for peace, and it also “encourages” those who have not been involved to come forward and take action in support of building a new government.

At the Stakeout following the meeting, the Ambassador from the United Kingdom, Matthew Rycroft, addressed the press. La Voce di New York asked the UK Ambassador if the new resolution will allow for foreign aid in the fight against Daesh, or if another Security Council resolution will be needed; Rycroft said the resolution made it so that another meeting will not be necessary if the new government will request help. La Voce also spoke to the Ambassador from Italy, Sebastiano Cardi, who was more prudent and said that they may need a second resolution in order to provide foreign military aid in the fight on Daesh in Libya.

After the Security Council meeting, Martin Kobler briefed the United Nations Press with his hopes and thoughts about the resolution. “[The] consensous is the fight on Daesh,” and foreign assistance in that pursuit is not the primary objective. Referring to schools being closed and hospitals being undersupplied, he said “Life has to start again,” enforcing that everyday life for the people of the terrorized country must come back to some kind of normality. He also addressed that cycle of radicalism, and how the closed schools lead to uneducated individuals who turn to radical groups, and therefore the cycle of fighting ISIS and other terrorist organizations is perpetuated and not brought to a halt.

Martin Kobler leaves the UN with words of hope; “Today the future of Libya starts.”