As the class of 2020 begins college and a young writer prepares to enter university, she reflects on the unique aspects of the American ritual of leaving home for school, and how it affects both parents and children alike as a teen takes their first steps into adulthood

Higher education has become, in the recent decades, more of a necessity than a luxury. While the acceptable standard of education used to be a high school diploma, with perhaps a Bachelor’s degree for the intellectuals, an undergraduate diploma has replaced this as the standard for young adults across the globe. There are many aspects of American society which have been altered to accommodate this change- young adults find themselves working multiple jobs, graduating with more debt, and living in their parents house until their early twenties. The economic side effects of a college degree have as a result been well discussed in the recent past, however there is an additional, more ritualistic aspect which has become a part of life in most American households- the act of leaving home.

The steps of the process will bring back distinct memories for the parents of any young American who has successfully completed the college process. A junior year filled with books to prepare for major exams, with school breaks and vacations littered with college visits and information sessions. A summer before senior year preparing to not fall behind on essays and forms, only to stumble into the month of January, crazed by deadlines and waiting. A lucky few find out their results via early decision applications, while the vast majority nervously anticipate the biggest news of their life so far. April rolls around, emails are sent out, and just like that the preparation for the send off begins. 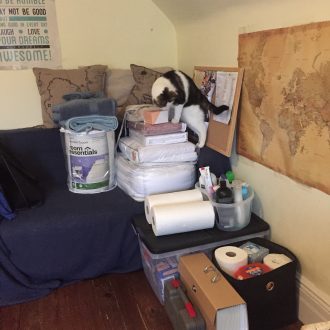 “Leaving the nest,” striking out on your own for the first time away from your parents, is a harrowing mental transition, accompanied by innumerable trips to Target, Bed Bath and Beyond, and drug stores to stock up on everything one never knew they needed. Suddenly, for parents and children alike, it becomes imperative that they arrive to their dorm armed with 36 rolls of toilet paper. For the parents, this kind of nesting and hoarding assures them that their child will be well equipped to take on the year without them; for the child, pulling up list after list of “college essentials” online, it seems laughable that anyone would even think of entering school without a mattress pad, mattress topper, mattress cover, and bed risers. (Most teenagers I’ve spoken with don’t know the difference between the first three, but there’s a general consensus that they’re crucial.)

When asked about her shopping experience, Christine Skorupa, an incoming freshman at Binghamton University, admitted that “I do think that I have way too much and probably more than other incoming college kids…I think that around 25% of the stuff I bought will have been a useless purchase.” Victoria Woods, a student who’s gearing up to begin at Reed College, had a similar account to share, stating “I’d say i paid too much attention to premade lists.” The entire summer before classes start is filled with goodbyes to every friend you’ve ever had, taking lots of pictures, planning what your dorm will look like, and buying odds and ends from the last day of high school right up into you walk into your residence hall. The entire experience, however, is not exclusively a culturally embedded scam to extort money from students- it can introduce young adults to an adult life, in which they need to think about buying things such as soap, toothpaste, and garbage bags. This is what Eleni Broadwell, an incoming freshman at Hamilton College, spoke about when asked to elaborate on her on experience. “Personally, shopping for college introduced me to a life of frugality,” she said. “I needed to be smart about how I spent money!”

While it is ultimately the student who is striking out on their own, making their way in the world and trying things for the new time, there is another, equally affected player who is affected by the transition- the parents. In many countries across the globe, leaving for college isn’t quite so troublesome for the doting mom and dad, as it’s more normal for students to attend school closer to home, perhaps even continuing to live with their family through and after attending university. In America, however, where living with your parents after college is synonymous with a failure at some point along the line, the send off for a freshman’s parents can be truly devastating. It hits some parents early and hard- “My mom first started crying about this two years ago when she realized last summer was the last summer I’d be home,” Henry Gold, an incoming freshman at Wheaton College laughed. While this anecdote was humorous, it’s extremely indicative of the mindset which going off to college brings for families. Every event is the “last” everything, for it’s assumed that once a student goes off to school, everything changes. This mindset, perhaps foreign to parents from other countries who did not go through this themselves as a child, only motivates parent and child alike to enter college armed with any supply that they could ever need, ever.

Ultimately however, beginning one’s time at college is a happy event which marks a new step in a family’s dynamic, and in a child’s life. As the end of August grows near and many American teenagers are sent off to school, two things are certain; first, that they will experience things that will mold them as adults and influence their future decisions, and second; that despite everyone’s best efforts, they’ll find themselves writing home asking for something to be mailed to them by the end of their second week.