November 2016 is coming to a close and this tumultuous month has created opportunities for reflection on, among other things, the linguistic and cultural legacy of 2016, and a need to reaffirm, as the American Council for the Teaching of Foreign Language (ACTFL) has, the future of America to be one “where cultural and linguistic diversity is viewed as an invaluable asset that enriches the lives of all.” If we consider the “English-only” sentiments that limit how many Americans actually speak multiple languages (only 25%), we recognize immediately that there is much work to be done to make America’s linguistic and cultural diversity great.

As if to counterbalance to the current climate of hostility toward diversity, an opportune program of the Inserra Chair to promote, advance and preserve the study of Italian, “Come sta l’italiano? The Present and Future of Italian Language and Culture Studies,” was held on November 15 at Montclair State University. The standing room only event engaged, with renewed enthusiasm, educators, students, representatives of governing bodies and community members, and along with Teresa Fiore, MSU Inserra Chair in Italian and Italian America Studies, the participation of the Consul General Francesco Genuardi, Dennis Looney (Modern Language Association), David Ward (Wellesley College) and Lucia Pasqualini (Ministry of Foreign Affairs and International Cooperation).

As a professor of Italian with a significant investment in American linguistic and cultural legacy, I am fortunate to find myself in an environment that shares the ACTFL goal, “to support educators and ensure that language learners become linguistically and culturally competent to succeed in the global economy and develop the ability to interact respectfully with others both here in the U.S. and around the world.” The frequent and changing communication between peoples locally, nationally and internationally means that language is changing the world, and globalization continues to contribute to this dynamic nature of language. Globalization also has implications on language teaching and learning – it can change a person’s motivation to learn a foreign language for economic reasons as well as cultural enrichment.

Globalization influences modern societies in each nation, and in the whole world, so knowing more than one language becomes linguistic capital. To some degree, colleges and universities in the U.S. do invest in linguistic capital with a language requirement, so that graduates are prepared to participate as educated members of a global community. The status of Italian language is healthy, as reported by the Modern Language Association’s 2013 survey, a triennial report that is the pulse of language learning in the U.S. “There are approximately 60,000 students of Italian in 4 year colleges, – advised Dennis Looney, former Italian professor at the University of Pittsburgh and current Director of the Association of Foreign Languages of the Modern Language Association – moreover between 1960 and 2013 Italian has grown 543%. This tells us that Italian is finally a language being studied and given the attention it deserves, and is developing the programs that will nurture the students that want to study it.”

From this same report, statistics show that students do not invest in this linguistic capital. Italian suffers from the greatest attrition rate of all the foreign languages – for every 11 students who study Italian at the introductory level, only 1 student continues to advanced level studies (i.e., to major in Italian). So how do we improve this situation? To answer this question, we need to better understand the intrinsic and instrumental reasons that motivate students to study foreign languages in general. “The intrinsic values include the historical knowledge, cultural identity, skills for communicating across cultures (the transcultural value). – Looney explained – Instrumental reasons have professional applicability (diplomat, politician, secretary, etc.), as well as getting a job in a wealth of fields: design, food, business, science and technology, and K-16 teaching positions. Also the language industry, which we usually think of as translators or simultaneous interpreters in the United Nation, has recently experienced a new ecosystem of language and jobs, for example, globalization engineers and localization engineers.” The economic value of a college major provides a decent ROI (return on investment) while at the same time offers innovative and attractive programs to students. 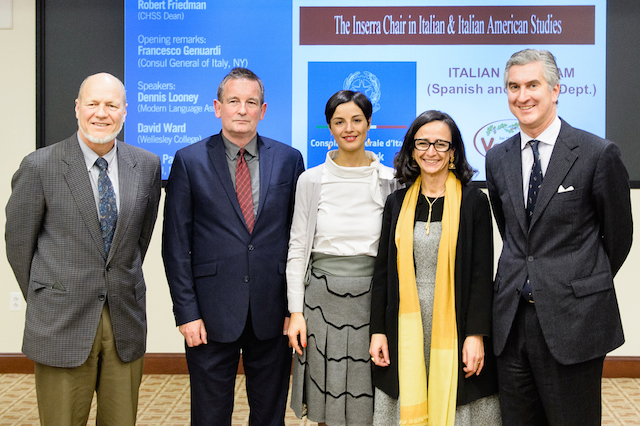 New initiatives being undertaken by the Ministry of Foreign Affairs and International Cooperation (MAECI) in Rome together with innovations in Italian program offerings in the U.S. will ensure that university level Italian programs will continue to grow. Consul General of Italy in New York, Francesco Genuardi, reiterated his commitment to education: “The United States and Italy are linked and have always been very close partners, allies and friends. At the core of this cooperation, there are shared values, and one of these is culture and language – he confirmed – Strengthening our bonds also on a cultural perspective, we are going to do a great job in enhancing our relationship with the United States.”

The question then becomes how do we continue to engage our students? What are the programs that will increase the linguistic capital in Italian as a foreign language? MAECI has released white papers from the 2014 General Assembly wherein strategies for linguistic promotion were identified according to geographical regions of the over 100 countries in which Italian is taught. For example, in China, the scope of teaching Italian rests in the development of economic ties and cultural and creative ties (Made in Italy, music, art and fashion) and technology sectors in which Italy is a leader (nanotechnologies, materials science, green economy, and biomedical equipment). What promotional strategies were identified for the U.S.? To go beyond the traditional ties to Italian culture inherent in Italian studies, and to extend linguistic promotion of Italian to the business world in various sectors: fashion, food, design, art, museum activities, opera, art restoration, artisanship, high technology, machine tools, service industry, etc. Italian is the second most used language in the commercial world, synonymous with beauty and excellence and through Italian language and culture, language programs in the U.S. are poised for expansion and growth through the creation of a more interdisciplinary approach in language teaching and learning. There must be a stronger tie between the love for all things Italian and the formal study of Italian through appealing and creative curricular innovations.

All this must occur through language and not at its expense, since there already is an extensive appreciation of the Italian language. Beyond italsimpatia, a fondness that exists for Italian culture, elegance, innovation and fun represented by its people, products and customs, “there is also a shared ‘Italian spirit’ that supersedes national boundaries. – explains Elena Di Giovanni, Associate Professor of English Translation at the Università di Macerata – This delicate phenomenon indicates all indulgence is shown for Italians and the Italian language.” It is not unusual for an Italian abroad to encounter a local who knows Italian or tries to communicate in Italian. The breadth of the Italian language easily crosses borders and provides a congenial connection between Italians and  locals that is unrivalled by any other language.

This point was also emphasized by Lucia Pasqualini, the Head of office for the Promotion of Italian Language abroad (MAECI), who held previous Italian foreign service roles in Russia, Beijing and New York. Her interactions with regular citizens of those cities on a daily basis, as well as in her official capacity promoting Italian in education, provided her with much anecdotal data: the Italian language is alive and well, spoken by the Russian taxi driver, the Beijinger sales associate, and New Yorkers around 5th Avenue. “The data presented by Dr. Looney is quite surprising. The number of students studying a language in university does not represent the reality of Italian language speakers. How many people actually speak the language? Yes, perhaps other languages are studied more, but what is the likelihood that during your daily routine you will actually hear those languages spoken on the streets of New York City?” Again we reiterate: There must be a stronger tie between the love for all things Italian and the formal study of Italian.

Italian is the the fourth most studied language in the world and the fifth most studied foreign language in American universities. Italian university programs are poised for growth and we must leverage both the new demands of the global economy, and the job opportunities that are requiring a diverse skills set that and the value linguistic capital of potential candidates. Moreover, Italian programs must learn how to speak to the shared Italian spirit and translate the fondness of and love for everything Italian into a pedagogical tool worthy of advanced study through the core values of innovation, excellence, and beauty.